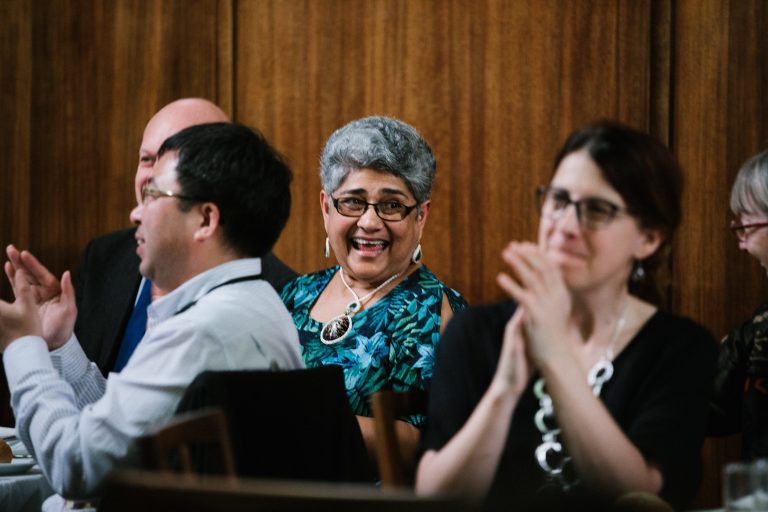 The 2018 Mitchell Humanitarian Award was presented to the Fiji Women’s Crisis Centre in a ceremony at The Australian National University on Tuesday night (13 February).

The Mitchell Humanitarian Award is an annual award that recognises individuals and organisations who have made an outstanding contribution to the cause of international development and who have been supported by Australian aid.

The Fiji Women’s Crisis Centre (FWCC) was established in Suva, Fiji, in 1984. Since then, it has provided crisis counselling and legal, medical and other practical support services for women and children who are survivors of violence. Its awareness raising and advocacy is widely recognized as having been path-breaking, and it has played a pivotal role in both Fiji and the broader Pacific region, spawning similar organisations in other countries, and resulting in changes not only in laws and policies but also in attitudes. The FWCC started receiving support from the Australian aid program in 1990; that support continues to this day.

Ms Shamima Ali is the Coordinator of the Fiji Womens Crisis Centre. Receiving the award on behalf of FWCC, she said:

This reward is a reflection of how ongoing multiyear funding over nearly three decades has enabled the FWCC to consistently challenge a society where patriarchal norms, attitudes and behaviour continue to violate womens’ human rights in every sphere of society.

We have been able to build best practice and roll it out throughout the Pacific and support members of the Pacific Women’s Network against Violence against Women.

FWCC’s success is an outstanding example of what can be achieved by a dedicated group able to access long-term support from the Australian aid program.

Others shortlisted for the award this year include: Mr Fessehaie Abraham, a refugee from Eritrea who mobilised the Australian community to provide support to his country; Ms Gillian Mellsop, a senior manager with the Australian aid program who went on to lead numerous UNICEF country offices; Dr Gabrielle Persley, an Australian bioscientist who was involved in the establishment of the Australian Centre for International Agricultural Research, the Doyle Foundation, and many other international agricultural research initiatives; and Heni Meke, former army nurse and now the CEO of Anglicare PNG.

“The amazing stories of all the candidates for the Mitchell Humanitarian Award should educate and inspire us,” Professor Howes said.

The Fiji Women’s Crisis Centre was presented with the Mitchell Humanitarian Award trophy and $10,000 at the 2018 Australasian Aid Conference dinner.

For more information on the nominees and winner, visit www.devpolicy.org/aidprofiles.