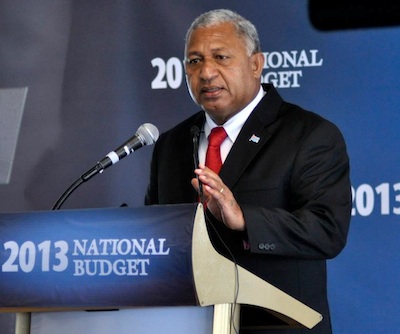 Fiji government budgets since 1987 have been prepared in the shadows of political instability and suspicion, coups, and uncertainty of the future. Even the general elections held under the 1997 Constitution, which was based on power-sharing, failed to fully allay the concerns. The People’s Coalition’s 2000 budget was implemented against the backdrop of rumours about another coup and continued protests. Since the 2000 coup political instability continued to be an issue. Even after the 2001 general election, investment levels did not increase. There is no doubt that the last seven budgets since 2006, including the revised 2007 budget, have been prepared against an environment dominated by fear, mistrust and uncertainty of the future.

One of the key thrusts of the 2013 budget [pdf] is the continuation of incentives for investment. However, it must be noted that, despite the significant incentives, the overall level of investment remains below 20% of GDP. More disconcerting is the persistent low levels of private sector investment. From as high as 14% of GDP in the early 1980s, it has now declined to only 4%. The media hype about investment approvals, and to some extent selected government propaganda about investment, does not reveal the true state of investment levels in Fiji. The registration and approval of investment proposals does not necessarily imply its implementation. Figures show that over the past few years registered investments have not translated into actual investments.

The reason for poor private sector investment is poor institutional process. Too much control and inconsistency of policies and incentives have created uncertainty. While the work of the Commerce Commission is important for addressing prices issues for the vulnerable and poor, it is not necessarily the best way to deal with the impact on poor. The lack of transparency and the unpredictability of the price control system have created more uncertainty and confusion and have probably increased the cost of doing business in Fiji. In fact, in 2011, the World Bank’s Ease of Doing Business Survey shows that Fiji’s ranking has gone down and is lower than Samoa and Tonga. The government needs to further concentrate on improving the business environment by applying rules and policies in a transparent and predictable manner.

The 2013 budget is bold and has built on the direction set by the 2012 budget. I am particularly encouraged by the emphasis of the budget on capital expenditure and a focus on roads. The deterioration in the infrastructure in the last 25 years has been phenomenal and it has become one of the binding constraints for investment in Fiji apart from the sustained political uncertainty. The infrastructure deficit has to be addressed and the increase in the deficit to 2.8% in 2013 budget to address infrastructure bottle-necks is not necessarily immediately worrisome. If the spending on roads and other infrastructure is managed well and improved in the next two years, then we would be setting up a very good foundation for growth beyond 2014, especially if promised elections are held. However, the total debt level has to be scrutinized carefully so that it does not become unsustainable. The present debt level will have to be gradually brought down in the next few years so that there is enough fiscal space to counter any global risks emanating from the global economic slowdown.

There are other positive aspects of the budget where increases in expenditure on health, education, social welfare, pensions for those over 70 years etc. is going to have a positive impact on improving the quality of life of people. The health sector particularly needs urgent attention and we hope that the increase in the budget is used to improve the conditions of the hospitals around Fiji and the services it provides. The condition at the CWM Hospital in Suva for example is depressing. It has filthy toilets and dirty floors, and services at the hospitals are getting worse by the day. A 70 year old woman who suffered a stroke was left in the corridors of the CWM hospital in Suva without any care for almost a day. Expenditure allocation alone therefore does not mean that services to the poor are going to improve. It depends on how the respective ministers, their permanent secretaries and senior civil servants, are able to implement and spend funds wisely to improve these services. In my view the biggest hurdle for the government to achieve better delivery of public services is hampered by ineffective ministers and senior civil servants.

An extended version of this post was originally printed in Republika magazine, Fiji.

Biman Prasad is Professor Economics at the University of the South Pacific and the views expressed here are not those of his Employer.