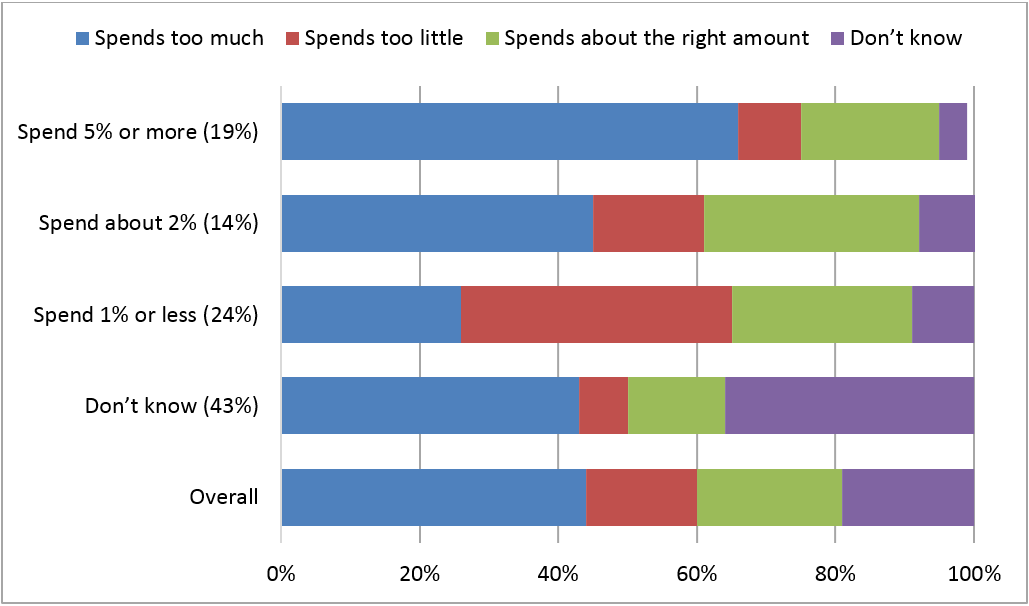 A finger on the pulse: new polls of Australian public opinion on aid

Results from several polls released in the last month provide new insights into how Australians feel about foreign aid. Though public opinion poll data are certainly not without their faults, as Benjamin Day has previously explored, they are nevertheless an interesting barometer of where the public now stands. The latest results suggest that Australians are generally (still) in favour of reducing foreign aid – though they remain generally uninformed about the size of the aid budget – and that they are more or less in agreement with where the government decided to make cuts to bilateral programs for the 2015-16 financial year, with one notable exception.

In February and March of this year, the Lowy Institute found that 41 per cent of Australians thought that $5 billion – the amount of aid given in 2014-15 – was ‘about the right amount’, while only 36 per cent thought this was too much.

At the end of May, when asked a similar – albeit differently worded – question on another Lowy Institute survey, 53 per cent of Australians came out in favour of the aid budget having been reduced by nearly a billion dollars in the 2015-16 budget, while 35 per cent opposed the cuts (with 19 per cent opposing them strongly).

Some inconsistency in responses to questions about aid (a phenomenon that Charlie Pickering, among others, has recently pointed out) is apparent here – even after allowing that some of the ‘don’t knows’ from the first survey might have shifted to support the aid cuts by the later survey, it seems that not a few people must have responded that both $5 billion and $4 billion was ‘about right’.

Data on the public’s knowledge of foreign aid were also collected last month by Essential Media Communications, which found that only 11 per cent of the public were able to correctly identify the size of the 2015-16 foreign aid budget (less than 1 per cent of the Federal budget), while 43 per cent simply ‘don’t know’.

Essential Media then combined these data with a question on people’s opinion of whether Australia spends ‘too much’ or ‘too little’ on aid. The results are much as one might expect: more than 65 per cent of the people who believe foreign aid makes up 5 per cent or more of the Federal budget think we spend too much, while nearly 40 per cent of those who estimated the size of the aid budget correctly think it is inadequate. More curiously, 43 per cent of those who admit they don’t know how much is spent on foreign aid, nevertheless are convinced that we are too generous with our aid.

Note: Percentages in brackets represent the percentage of the sample which holds that view.

(Those interested in longer-term trends might note that the overall figures remain almost unchanged since July 2011, the last time Essential Media posed this question).

Perhaps the most interesting set of results from the latest polls, though, are those revealing the relative importance Australians place on giving foreign aid to particular countries and regions. The magnitude of cuts to bilateral aid programs in the 2015-16 budget lines up closely with the strength of public opinion about where aid should be given, and (less closely) with the ranking of bilateral aid program budgets:

The general correlation between public opinion and the distribution of the cuts isn’t too surprising – it is quite logical that public sentiment towards other countries and regions would align with what the government perceives as our national interests or traditional ‘sphere of responsibility’. Africa is a notable exception though: half of Australians view African countries as equally worthy of our aid as Southeast Asian countries, but aid to Africa was all but decimated in this year’s budget.