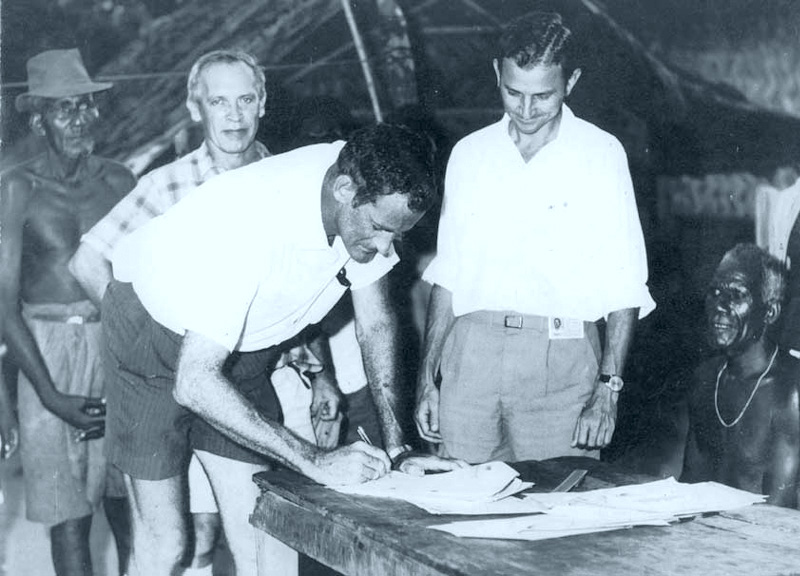 A kiap in Bougainville: lessons for today

Much has been written about the so-called patrol officers, or kiaps, in colonial Papua New Guinea (PNG). That material includes some books by kiaps, recording their memoirs of their time in PNG, and some by historians and others trying to understand the colonial experience and its impacts on contemporary PNG. The accounts by kiaps record interesting human experiences in a country of remarkable diversity, and the inside workings of what was for most Papua New Guineans the main manifestation of government. A few of these accounts also provide insights into major developments in PNG.

In terms of the kiaps as the main manifestation of government, they were quite a small group. As late as 1968 the number of kiaps (officially ‘field staff’ in the Department of District Administration) totalled 521 – inclusive of 19 district commissioners and 121 cadet patrol officers (see p. 4 in Hank Nelson’s discussion paper on defining the dynamic groups in PNG).

In terms of providing insights into major developments that were occurring in colonial PNG, few first-hand accounts by former kiaps are of as much importance as the story 91-year-old Bill Brown is in the process of writing about his 26 years as a kiap, from 1949 to 1975. This memoir is also being published, chapter by chapter, on the PNG Attitude website, where so far 30 chapters are available. In the longer term, Bill hopes to see the memoir published as a book, but there are a number of chapters yet to be written. In the meantime, the 30 existing chapters should be better known and the material made use of by researchers and practitioners.

The first 19 chapters deal with Bill’s time from 1949 to 1966 in postings in what are now Central, Eastern Highlands, West Sepik and East Sepik provinces. These chapters provide a picture of a rapid learning curve for a newly arrived 19-year-old in 1949, as he does the basic administrative and patrolling work required of kiaps. The chapters also give a picture of what life was like in the isolated places where he worked, and the often very interesting people he dealt with on a daily basis. The people include a number of more senior kiaps under whom he served, not always entirely happily! Beyond that, these chapters provide a compelling description of the operation of the local administration system, which was in some ways highly decentralised but also tightly centrally controlled, and which was at the heart of the PNG colonial regime.

Bill’s 11 chapters on his years in Bougainville, which spanned from 1966 to 1973, provide much more detail than the ones dealing with his earlier years in PNG. These chapters take the story as far as 1969, with four more years to be covered. He tells of the unexpected direction that he leave East Sepik and at short notice head to Bougainville. By now he was an experienced and reasonably senior officer, and was apparently selected on the basis of capacity to deal with what was emerging as a difficult set of problems for the Administration.

He was sent to Bougainville by the Department of District Administration in 1966 to be the senior officer dealing with the processes of interaction between exploration and mine-affected landowners. He was in charge of a number of more junior kiaps, several of whom are assisting Bill in his research and writing by providing him with the daily Field Officer’s Journals that they were required to keep, and by providing responses to queries from Bill in relation to what they did and witnessed.

Bill describes in some detail the work that he and the other kiaps did to explain to the numerous small communities in the areas likely to be impacted by the mine, not only about the constantly changing intentions and plans of Conzinc Rio Tinto Australia (CRA), and ultimately CRA-majority owned subsidiary Bougainville Copper Ltd, but also the mining and land policies of the colonial Administration. He describes numerous incidents where confrontations occurred between landowner communities and CRA personnel, and the role of the kiaps in the resolution of such incidents. He makes it clear that he and other kiaps had difficulty in carrying out some of the instructions they received. On the basis of their experience elsewhere in PNG, where rights of ‘natives’ to their land were generally regarded as sacrosanct and compulsory acquisition by the Administration occurred only when essential, they struggled with the idea that landowners had no rights in relation to minerals under their land, and that CRA was able to demand grant of leases over whatever land it wanted.

The 11 completed Bougainville chapters provide some new perspectives on what happened in the processes of exploration for and establishing of the Panguna mine. They describe many significant events and steps in the development of the mine, including Bill’s constant dealings with CRA personnel and with his ‘superiors’ in Port Moresby, and also in Canberra, which have not been recorded in the growing literature about the Panguna mine. He paints a much more complex picture of the colonial Administration’s handling of the mine than has been previously understood. There were diverse positions in the Administration, which was not as much in lockstep with CRA as has widely been believed.

The Bougainville chapters shed light on the origins of the sources of conflict in Bougainville, and also offer lessons to those making efforts to reopen – and possibly expand – the Panguna mine. In terms of conflict origins, they reveal a consistent depth of feeling amongst the diverse landowner communities, from four main language groups (Nasioi, Torau, Eivo and Nagovis), that were ultimately impacted by mine-related leases. Although there was support for the project in areas of Bougainville not directly impacted, a large (but never quantified) proportion of members of those communities opposed the mining exploration, and were deeply concerned at loss of land for the mine.

For those who might be involved in efforts to reopen the Panguna mine, at least three points arise. First, it is clear that the efforts of the kiaps to listen to and communicate with mine exploration-affected communities had quite an impact on reducing tensions, and limited current capacity of that kind should be a concern.

Second, though the current Bougainville government and many Bougainvilleans in other parts of Bougainville may support resumption of large-scale mining as the best way to support a move to independence, significant localised landowner opposition to mining cannot be ignored.

Third, there have been significant population increases in the mine-lease area communities (and neighbouring areas) since the 1960s. As a result, pressures on available land (already much reduced by the mine leases) are now much greater. Community concerns about impacts of resumption of mining, and especially about possible associated expansion of mine-lease areas, can be expected to be even more intense than they were in the 1960s.