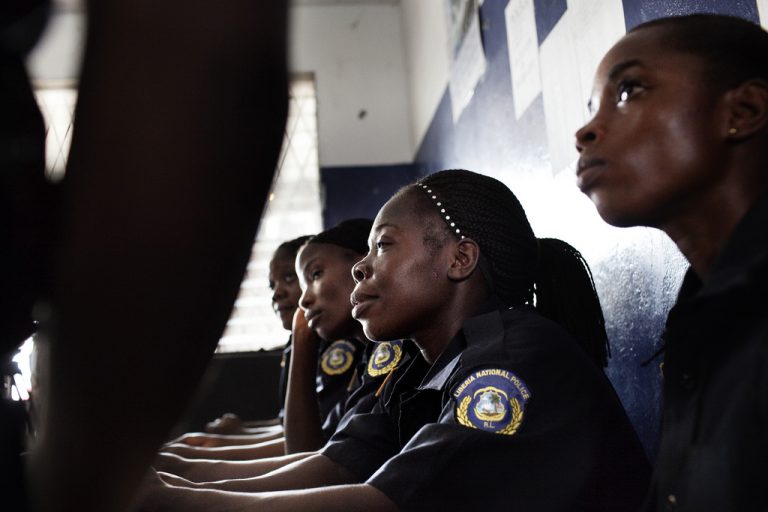 A new global index – Women, Peace, Security: what does it add?

There are a growing number of global indices – many would be familiar with the gender rankings published in the Human Development Report, and by the World Economic Forum, for example. We reviewed all the existing indices carefully, and realised that there is a major gap.

Gender indices are typically limited to such indicators as whether women complete secondary school or are in paid work. These aspects of inclusion are undoubtedly important, but incomplete in the absence of justice and security. It is surely misleading to focus on girls’ schooling when they are not safe in their own home or community. Likewise, traditional measures of security include an array of conflict indicators, but invariably ignore systematic bias and discrimination against women and girls.

No index has ever before brought together women’s inclusion, justice, and security into a single number and ranking. The Women, Peace, Security (WPS) Index represents a major innovation in how we think about and measure women’s well being by bringing achievements in, for example, schooling and access to cell phones, together with data on violence against women.

It is the first ever Index bridging women’s inclusion and justice, as well as security. It is also the first gender index framed explicitly by the Sustainable Development and Sustaining Peace Agendas.

Several innovative features set the WPS Index apart from existing gender indices and security indices. It incorporates two indicators that have never been used in other prominent gender indices: perceptions of community safety and organised violence, and whether women’s paid work is deemed acceptable by men in the society. The index also incorporates several other indicators that have rarely been included in other indices: financial inclusion, cell phone use, a bias for sons, and intimate partner violence. The following graphic lists the 11 indicators in the WPS Index. 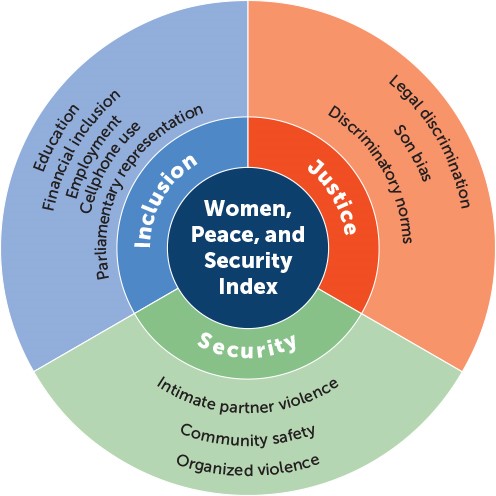 The WPS Index, which uses internationally comparable data from published sources, has the most in common with the Social Institutions and Gender Inequality (SIGI) Index, published by the Organisation for Economic Co-operation and Development (OECD), and the Economist Intelligence Unit’s Women’s Economic Opportunity Index. But those two indices rely extensively on expert judgment to measure various concepts or to address missing data, are far more complex in construction, and have many more indicators than the WPS Index. And the SIGI Index does not include any economic dimensions (such as employment and cell phone use), nor any indicators of organised violence at the societal level.

Most gender indices focus on gender gaps, thereby restricting themselves to indicators that can be measured separately for men and women. The WPS Index—like the SIGI and Women’s Economic Opportunity indices—estimates women’s status and achievements in an absolute sense, rather than relative to men.

The set of indices around peace and security tend to focus either on state fragility or on forecasting the probability of armed conflict or political instability in the future. Like the WPS Index, they often cover levels of education and conflict intensity, but they do not include a focus on women or disaggregate by gender.

So what do the rankings reveal? Iceland leads the world in this first edition of the WPS Index. Afghanistan and Syria are tied for last — 153rd place.

Australia ranks at 17th overall, just behind Austria and Luxembourg. Australia emerges with a strong record on Inclusion and Justice: at or near all the developed country group averages. The key weakness for Australia is on the perception of community safety – only one in two women feel safe walking alone at night in their neighborhood; the worst-ranking developed country. And there is a 35 percentage point gender gap on this indicator for Australia — the worst in the world, tied with Saudi Arabia.

By way of comparison, the United States ranks 22nd overall and is on par with top ranking countries on inclusion and justice metrics. However its score on the security dimension is depressed by high rates of intimate partner violence that are more than ten percentage points above the mean for developed countries.

In sum, the new WPS Index provides a simple number and ranking that spotlights achievements and deficits in women’s inclusion, justice, and security, and demonstrates the feasibility of improvement. The aim is to inform and inspire action by governments, multilateral agencies, development partners, civil society and business to advance women’s peace and security, and to help hold governments to account for their commitments to the SDGs and other global commitments.

The Australian launch of the WPS Index will be hosted by the Development Policy Centre today (Wednesday 13 December 2017) from 5:30-6:30 pm at the Crawford School of Public Policy, ANU. Register for the launch here.