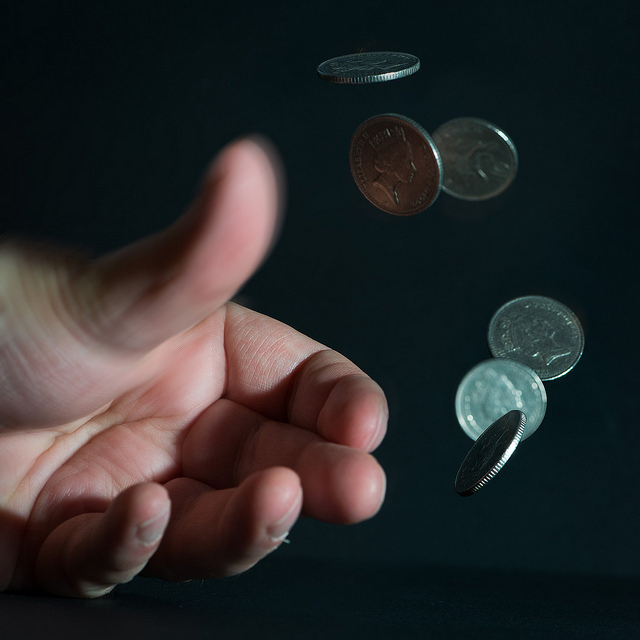 Once, in happier times, 0.7% was the cornerstone of aid advocacy. It was the target that aid’s supporters extolled their politicians to meet. Zero point seven per cent of gross national income (GNI) given as official development assistance (ODA). Australia never got there, but it promised to come close, with a bipartisan commitment to giving 0.5% of GNI as ODA.

That was then though, and now, in the age of the aid cut, 0.5% is gone and 0.7% is a pipe dream. It shouldn’t be. As the United Kingdom has shown, aid is such a small slice of government spending that the point seven target could be met easily, even in a time of deficits. For the time being though, it’s out of the question. There’s no public enthusiasm. Other than the Greens, there’s no political enthusiasm. And, while there is excellent work being done by the Campaign for Australian Aid, for now it is defensive work, pushing against further aid cuts, rather than pushing for major increases.

As I sat at the ‘Creating a healthy domestic environment for aid’ workshop that the Development Policy Centre held earlier this year (the workshop report is here [pdf]) I mused about what would be required to change aid’s fortunes in Australia. My answer, of course, was “lots of things” (and as the workshop report shows, important work is already being done). But as my mind bounced back and forth between different bright ideas, one constraint kept coming back: money. Campaigning takes lots of it. Advocacy isn’t cheap either. Money. Private sector lobbyists have oodles of the stuff.

How much money would meeting this target put in the hands of a collective campaign? The chart below provides the numbers. In case 0.7% (70 cents out of every $100) sounds unrealistic to you, I’ve also included some intermediate steps: 0.25%, 0.34% and 0.5% (these numbers are, respectively, the aid/GNI ratio last financial year, aid/GNI at its recent peak, and the old Australian target). 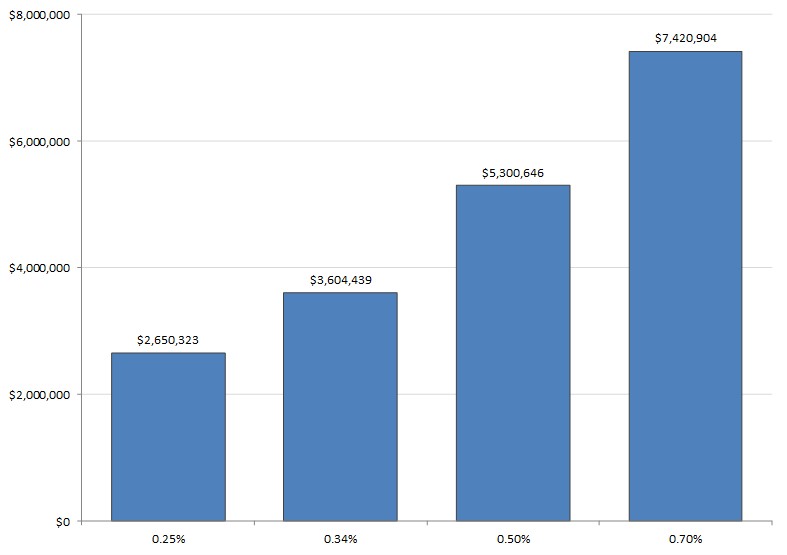 To calculate these figures I used the combined 2014 revenue from private donations for all ACFID member NGOs plus the five largest non-members (I took the data from the ACFID Annual Report). (‘Private donations’ excludes revenue from DFAT and other government departments, but includes all public donations from within Australia. If I exclude goods in kind and include only revenue for international work 0.7% delivers $6.1 million rather than $7.4 million. Email me if you want full data, calculations and assumptions.)

To give these numbers some context, the Campaign for Australian Aid’s budget last financial year was about $1,000,000. Point seven would bring in over seven times that amount of money. Perhaps not enough to turn Jacqui Lambie into an aid supporter, but more than enough to give aid a loud campaigning voice with plenty left over to fund other work like educating politicians about development.

In advocating for my point seven target I am not suggesting NGOs are currently doing nothing. NGO funding for the Campaign for Australian Aid is about $150,000 annually and some NGOs provide other funding for campaigns. Also, in 2015 ACFID member NGOs contributed $1.4 million to the running of ACFID (ACFID is not a campaigning group, but as a peak body it provides valuable public goods to the Australian NGO community.) And some NGOs employ their own advocacy staff. What I’m suggesting would be on top of these contributions.

What I am suggesting would also come at the cost of NGO’s own valuable programmes in the field. This would be a painful trade off. I understand this.

And yet, by my estimates the Australian government aid budget is about four times the amount of money that Australian NGOs receive from the Australian community. Government aid — its volume, its quality — matters a lot if you care about development outcomes. And when you factor in other development issues that could be campaigned on (migration and climate change for a start) it is hard to escape the fact that the behaviour of the Australian government is crucial to almost everything NGOs value. Surely, then, it makes sense to sacrifice a bit more to have a louder collective voice in shaping government policy?

After all, I’m not asking for a lot. Just an extra 70 cents out of every 100 dollars. When we were campaigning for the old point seven target, we always said it wasn’t much sacrifice to make, and that it would do a world of good. I think that’s just as true with my new point seven target too.

Terence Wood is a Research Fellow at the Development Policy Centre. Terence’s research interests include aid policy, the politics of aid, and governance in developing countries. His PhD research focused on voter behaviour in the Solomon Islands elections. Prior to commencing PhD study Terence worked for the New Zealand government aid program.