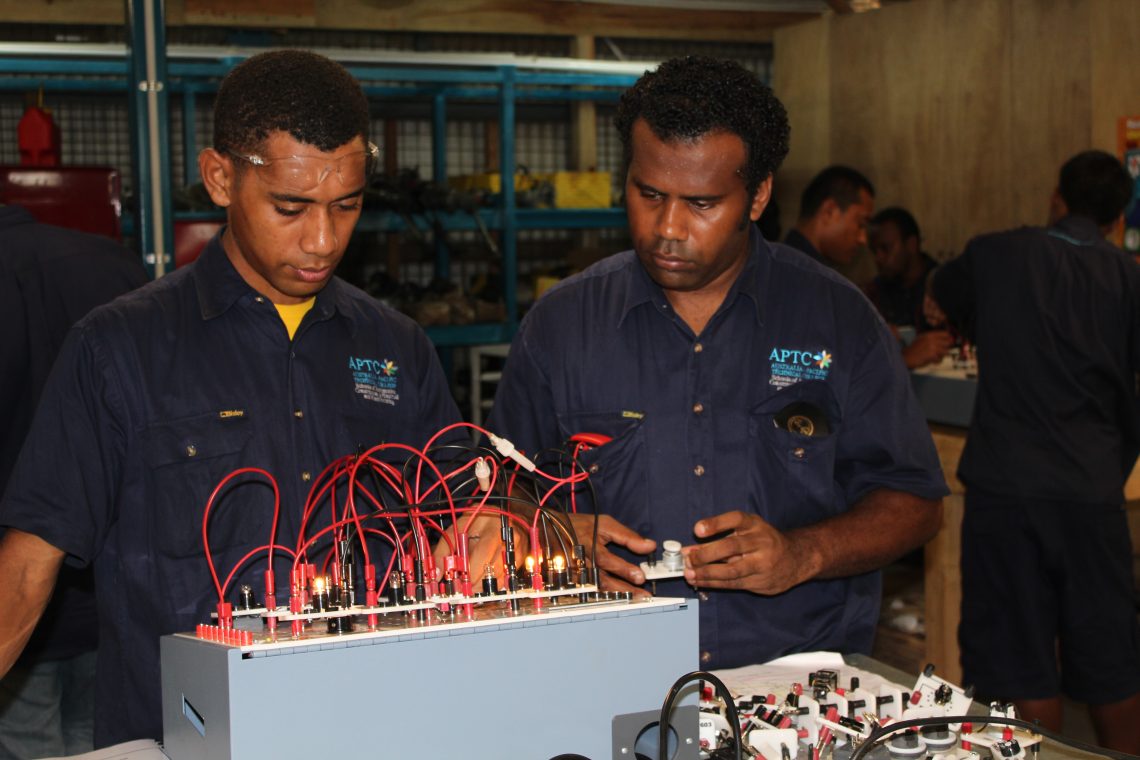 A Pacific Skills Partnership: improving the APTC to meet skills needed in the region

By Satish Chand and Helen Dempster

Last month, Pacific policymakers, academics, and nongovernmental organisations met in Suva, Fiji, for the inaugural Pacific Skills Summit. On the agenda was the role of skills training and migration in addressing labor market demands in Pacific states, as well as broader sustainable development efforts. It was the perfect setting to present our vision for a regional variant of the Center for Global Development’s Global Skill Partnership model – a Pacific Skills Partnership. This partnership would take the best parts of the existing Australia Pacific Training Coalition (APTC) and adapt it for greater impact – building skills in the region and, ultimately, greater development.

The benefits of skills development and mobility in the Pacific

The demand for skilled labor in Pacific Rim countries, developed and developing alike, exceeds these countries’ supply. Historically, this supply has come from the Pacific islands, which have provided low-skilled laborers to work on farms and in factories in Australia, Canada, New Zealand, and the United States (US). Recently, however, the profile of these migrants has shifted towards skilled and professional workers. Australia’s Seasonal Worker Program and New Zealand’s Recognised Seasonal Worker Program have formalised and extended the informal, and sometimes illegal, schemes of the past and are a first step towards an integrated “skilled” labour market in the region. Through migration, this skilled labour market can contribute to human capital growth in countries of origin and plug skills gaps in countries of destination.

Promoting skills development in the region could deliver large gains both for developing and developed countries of the Pacific Rim, as well as the trainees themselves. Domestic labour markets in the Pacific Islands fall short of generating the quality and quantity of jobs needed; the youth unemployment rate in several nations is high and rising. Training schemes would allow governments to train for the skills needed in these countries in the future and improve livelihood opportunities for Pacific youth.

Such up-skilling can also help fill gaps in the developed countries of the Pacific Rim. The populations of these countries are aging, leaving them short of workers in fields such as elder care and agriculture. Recent policy moves, such as the Australian government’s Pacific Labour Scheme, allow workers from the Pacific Islands to take up low- and semi-skilled work. The potential for expanded legal pathways, especially with an up-skilled Pacific labour force, is therefore great.

For the trainees, the potential economic benefits from skilled migration are significant. In the US, the average social rate of return (calculated as the difference between societal investment in education and increased earnings before tax) for someone with an associate degree is 12.9 per cent, and 10.9 per cent for those with a four-year degree. Training at local institutions in the Pacific Islands costs less than in the US, thus the returns could be higher. The tuition fee for a three-year nursing program in Fiji, for example, is roughly a third of that in Australia, while the average salary of a nurse in Australia is four times that of Fiji. The costs for graduates of the APTC – which trains students in Pacific Island countries – are comparable to graduates in Australia, but most APTC students receive generous scholarships. So, while private returns are large, this is partly because the training is funded by Australian taxpayers. Still, once these skilled workers migrate to more developed countries, they are likely to earn several times more than if they stayed in their home country.

What can we learn from the Australia Pacific Training Coalition (APTC)?

Of course, not everyone supports skilled migration – some worry about “brain drain”. While there is no consensus in the literature on the actual effects of brain drain, some schemes try to mitigate it such as the Global Skill Partnership (GSP) model. In this model, a country of origin agrees to train potential migrants in skills specifically and immediately needed in a country of destination, before those people leave. And in return, a country of destination agrees to provide technology and finance to support the training and employment of both those potential migrants and non-migrants at the origin.

The APTC is based in part on this model. Announced in 2005 at the 36th Pacific Island Forum Meeting, the APTC is designed to increase the supply of skilled workers in targeted sectors for improved employment opportunities nationally, regionally, and internationally. The goal was to provide Pacific Islander men and women with Australian qualifications that open doors to employment, and to support skills development in the Pacific in response to labor market requirements. The APTC delivers vocational qualifications through five training schools – automotive, manufacturing, construction and electrical, tourism and hospitality, and health and community services – for students from 14 Pacific Island nations, with funding from the Australian government.

The APTC’s achievements to date are mixed. As of mid-2019, 12,887 graduates (42 per cent women) had trained with APTC, with an overall employment rate of 83 per cent. APTC enjoys a student satisfaction rate of 99 per cent and an employer satisfaction rate of 98 per cent. However, its track record in facilitating skilled emigration is poor. By 2014, a meager 1.2 per cent of graduates had successfully emigrated to Australia and New Zealand. Three factors account for this:

At the Pacific Islands Forum, it was evident that the APTC is evolving into a Pacific Skills Partnership. A coalition is forming between local technical and vocational institutions, Pacific Island governments, and donors. This coalition can learn from the experiences of the past and the principles of the Global Skill Partnership model.

We suggest four key considerations for policymakers to keep in mind in developing a Pacific Skills Partnership:

Last month’s meeting is a step in the right direction. We will be watching with interest what happens next.

This post was originally published on the Center for Global Development blog here.