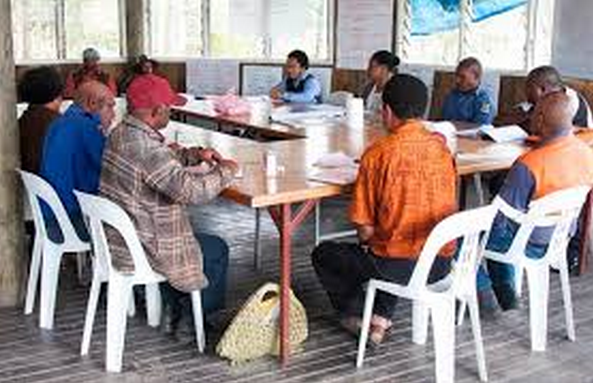 A public-private partnership tackling law and order in PNG

Several months ago a conflict broke out between two tribes in the Porgera District of Enga Province in Papua New Guinea. Two people were killed in the initial fighting, and more violence seemed certain to follow.

Then something special happened. A group of business and community leaders, together with the local police commander and the magistrates of the village courts, intervened. They brought the warring tribes together and, via a process of mediation, facilitated the resolution of the conflict before it could further escalate, and the all too familiar consequence of tribal warfare could occur.

Two or three years ago the fighting would have escalated to such an extent that many lives may well have been lost in a short period of time. Households would have been substantially affected and whole communities placed under threat. In addition, economic activity would have paused as businesses were shut down and highways closed.

In this case, as in many similar cases in the past two years, conflict was managed and mitigated by a group of local stakeholders formed through what is now known as the Restoring Justice Initiative Association (RJIA).

The RJIA represents a somewhat different approach to local-level dispute resolution and conflict mediation, by working with a broad network of stakeholders and partners who all contribute to an improvement in community safety and security.

It is also unique in how it started. While now an active NGO, RJIA represents a successful public-private partnership emerging from the extractive industries. RJIA started as a partnership between Barrick Niugini Ltd and the local community in response to serious concerns about the breakdown of law and order in and around the Porgera Mine.

Law and justice in Porgera

The Porgera District is located in one of PNG’s most socially complex, remote and undeveloped regions. It is faced with issues such as poverty, crime, tribal conflict, gender-based violence, sorcery and illegal mining. All of these problems have been exacerbated within a context of limited law enforcement capability and access to government services.

Since planning for the mine began there has been a massive influx of people into the district, with the population growing from around 10,000 in the mid-1980s to approximately 73,000 in 2014. Barrick has operated in the Porgera District since it acquired a majority interest in the mine in 2006.

While mining at this location has resulted in the delivery of substantial financial and other benefits to local, provincial and national stakeholders, it has also heralded dramatic processes of social and economic change. These have included social dislocation within some local communities and increasing contestation around access to and distribution of mining-related rents and other benefits.

High levels of crime and inter-personal violence, particularly against women and other vulnerable groups, together with tribal fighting and illegal mining, have all become the subject of growing concern.

In response, the RJIA plans, facilitates, and delivers a broad range of support aimed at strengthening law and justice service delivery in Porgera. This includes the provision of infrastructure, additional human resources and training, and development opportunities.

Particular attention is paid to local and national justice and security priorities, notably in respect of human rights awareness and training, as well as in the critical areas of family and sexual violence (FSV) and anti-corruption.

Among the positive achievements the RJIA network has delivered in the past three years has been the establishment and growth of four RJIA civil society groups. The Leaders Interest Group, Business Interest Group, FSV Steering Committee and Porgera Schools Disciplinary Committee, are driven by respected local community leaders, with committed membership support from formal justice agencies such as the police, and district and village courts.

The creation of an appropriate space for individuals and groups to come together and develop practical plans and responses to pressing local issues is a critical foundation for the RJIA to progress toward the achievement of its original aims.

Successful government lobbying from these groups has led to more effective law and justice services. This includes the placement of an additional 37 regular police officers at Paiam town to increase staff numbers to 51, and the ongoing delivery of a broad range of police training and development programs not seen before in the district.

Members of the civil society groups have also been active in peacemaking efforts in response to the many tribal conflicts that occur in different parts of the district. Anecdotal evidence suggests that tribal fights and fatalities have reduced in Porgera District in recent years and that the initiative has played an important role.

Positive progress has also been made in the prevention and management of family and sexual violence (FSV).

Achievements include the establishment of PNG’s first police Family and Sexual Violence Unit (FSVU), located within an area exposed to the impact of the extractive industry. The Porgera District FSVU is staffed by five police officers, including one female. Over 400 complaints have been lodged with the unit since it opened in June 2014, indicating a growing confidence among local women to report incidents of family and sexual violence to the police.

The RJIA Family and Sexual Violence Steering Committee (FSVSC) was also established in 2014. This group is very active and its success in bringing together a broad range of member entities and individuals is testament to its commitment to addressing FSV issues in a cooperative and coordinated manner.

The FSVSC, together with formal justice agency representatives, church groups, and broader community and business members, are now the recipients of a suite of FSV training programs to be delivered in 2015. Topics include: transformational leadership, family violence law and policy, male advocacy training, referral pathways, and gender equality. Some recipients of the training will become accredited and take the training to outreach areas.

The RJIA also strongly supports the Porgera Disabled Persons Association (PDPA), itself a member of the RJIA, and has recently facilitated the establishment of a partnership between the PDPA and the Australian-based Langford Support Services (a respected entity that delivers support services to people with disabilities). This partnership will strive to strengthen the voice, opportunities and services for people living with disabilities in Porgera District.

The impact of these FSV and other initiatives are strong examples of how all development actors, public and private entities, and the community can come together and contribute to better development outcomes within the PNG context.

The high-standing of the interest group leaders and their local knowledge places them in a good position to navigate successfully between local social orders and that of the state, thereby linking community and government approaches to justice.

Their progress so far demonstrates that civil society networks are capable of successfully navigating the complexities of local kinship and tribal affiliations and promoting broader community interests in the provision of effective security, justice and development.

The potential here is the sustainable facilitation of local, civil society leadership that feels empowered and has a strong voice in what is a complex and challenging environment. This is, of course, a long-term process and one that ultimately depends on local resolve, leadership and direction.

However, in light of calls by both the PNG government and the donor community to engage with informal or non-state approaches to the maintenance of order and to conflict resolution, the work of the RJIA may provide learnings for how this might look in practice in other places.

The security and development challenges in the Porgera District are both diverse and complex, and unlikely to be overcome soon. They flow to a large degree from the broader processes of social and economic change that have accelerated dramatically under the impact of large-scale mining development in one of PNG’s most remote and undeveloped areas.

The RJIA represents an attempt to mitigate some of the adverse impacts of these processes, while creating space for positive development outcomes. Its difference perhaps lies in building a broad network of stakeholders whose combined resources can help generate local capabilities to achieve better outcomes. It has, in effect, taken the opportunity to recognise and leverage the many positive resources that already exist in Porgera, together with accessing the resources, skills and geographical location of a broad range of development actors.

Moreover, it is progressively establishing functional links between the informal or indigenous systems of justice and the formal, introduced legal system of Western society. This has resulted in the improved capacity and capability of both, in partnership, to support and deliver enhanced community security and create an environment conducive to development.

The RJIA has delivered some promising results by attracting considerable support in Porgera and beyond. It may present as an interesting example of a public-private-civil society partnership for both the Australian and PNG governments, holding some lessons for security and development within the PNG context.

The RJIA is a Barrick Niugini Ltd initiated multi-stakeholder partnership that works together with government, business, development entities and civil society on peacebuilding, conflict resolution, social justice and community development projects in the Porgera District of Enga Province. Its work began in 2008 and has been operational in Porgera since mid-2012.