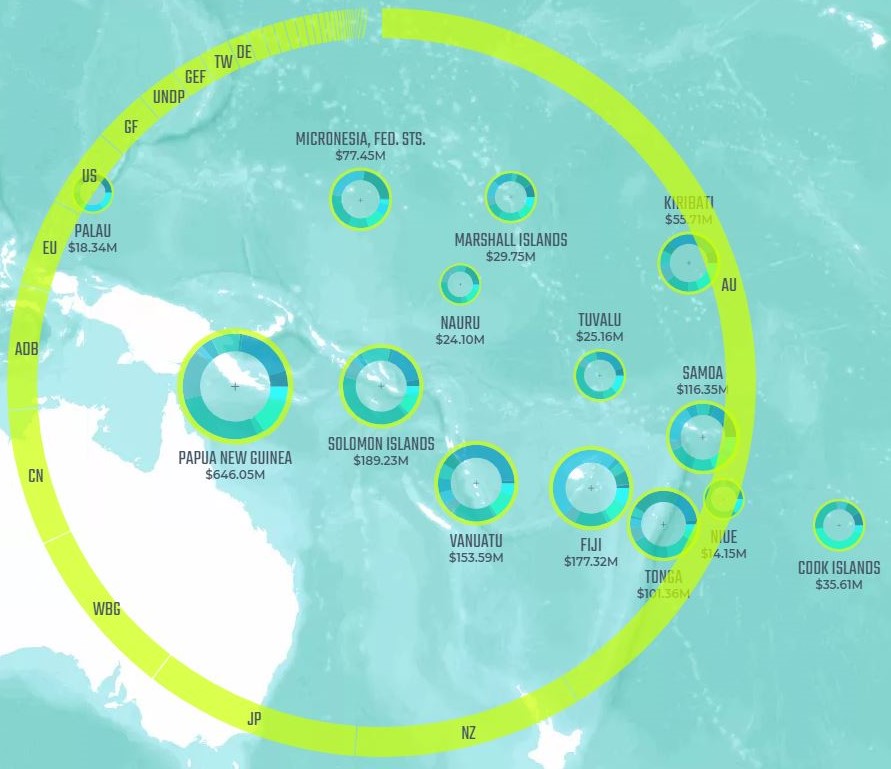 A step forward for aid transparency in the Pacific

By Alexandre Dayant and Jonathan Pryke

It is for all of these reasons that transparency has been enshrined in high-level aid effectiveness agreements, including the 2005 Paris Declaration on Aid Effectiveness, the 2008 Accra Agenda for Action, and the 2011 Busan Partnership for Effective Development Cooperation.

Aid transparency is particularly important for a region like the Pacific. Even when excluding NGOs and private sector philanthropies, there are more than 60 bilateral and multilateral donors operating in the region, spending around US $2 billion per year. With a total regional population of around 11 million, and – when excluding PNG – an average population size per country of under 200,000, the scope and capability for Pacific island governments to engage with and coordinate such a wide range of partners is a daunting task.

In the last decade there have been great advances in aid transparency. The International Aid and Transparency Initiative Standard (IATI), established in 2008, has established a new benchmark for international reporting. Each year more donors are getting serious about their commitments to IATI, as exhibited in the annual Aid Transparency Index. Many aid agencies around the world are also getting more serious with their own dashboards, widgets, and project pages, making their websites sophisticated repositories of aid knowledge (best examples include USAid’s explorer portal and DFID’s Devtracker). Despite these advances, we are a long way off regional comprehensive and timely reporting of aid flows.

We got tired of waiting.

Over the last 18 months we have been working on the Lowy Institute Pacific Aid Map, supported by the Australian Aid Program, which was launched on 10 August in Samoa. The Pacific Aid Map is an analytical tool designed to enhance aid effectiveness in the Pacific by improving coordination, alignment and accountability of foreign aid. The Lowy Institute Pacific Aid Map has collected data on almost 13,000 projects in 14 countries and from 62 donors from 2011 onwards. This raw data has been made freely available on an interactive multi-faceted platform, allowing users to examine and manipulate the data in a variety of ways.

By pulling together data from numerous sources, verifying data with donors wherever possible, and incorporating data on non-traditional donors, we have created the most comprehensive portal of aid inputs ever compiled for the Pacific, and perhaps globally. For some donors, including Australia, we have been provided a level of detail that has not previously been made publicly available. For other donors, notably China and Taiwan, we have had to build the data from the ground up.

This immensely rich database is suitable for a range of research projects, and we hope that scholars within the Pacific and focusing on the Pacific take full advantage of it. Matthew Dornan and Jonathan Pryke tracked recent trends in aid flows to the Pacific in a journal article last year, but that only scratches the surface. What we have collected in this database will allow interested academics to go much deeper.

We’ll be teasing out our own findings from the Pacific Aid Map, as well as adding even more sophisticated functionality, in the months ahead. Areas we are particularly interested in is rebalancing the narrative on China, who spent 8% of total aid between 2011-2016; looking more closely at the role of Australian and New Zealand, who still provide 55% of all aid; breaking down Taiwan’s investments in the region, which on a Pacific per capita basis is larger than China’s; assessing the roles of other ‘traditional’ partners such as France, the US and UK; looking at the sectoral breakdowns of aid and how they are changing over time; and looking at the continuing scale-up of the activities of the Asian Development Bank and World Bank in the region.

Other areas that could warrant future research include investigating trends in sub-sectoral engagement, assessing who gives scholarships and in what volumes, looking at the major implementing partners in the Pacific, assessing the breadth of regional investments in the Pacific, comparing and contrasting flows from new donors, identifying gaps in aid allocations, and tracking the performance of aid in the Pacific.

In a few weeks’ we will also be including data on ‘other official flows’, official funding from donor countries that can’t be classified as foreign aid – such as through the Australia Defence Cooperation Program. In a few months we will be adding even more functionality to the site in the form of a graphing tool. We are also committed to updating the Pacific Aid Map for at least the next three years.

There are ways that our database could be improved. We could continue to disaggregate large projects to show what actually is taking place on the ground, we could try and make the data more timely (though that is largely dependent on donors), we could incorporate some measures on performance (we currently only focus on inputs), we could expand the geographic scope, and we could make our series larger by going further back in time.

Even without these improvements, the Lowy Institute Pacific Aid Map is a new benchmark for transparency in the Pacific, and we hope that it will be a useful tool that will contribute to enhanced aid effectiveness in our immediate region.

Alexandre Dayant
Alexandre Dayant is a Research Fellow at the Lowy Institute, where he works on a project mapping and analysing foreign assistance in the Pacific.