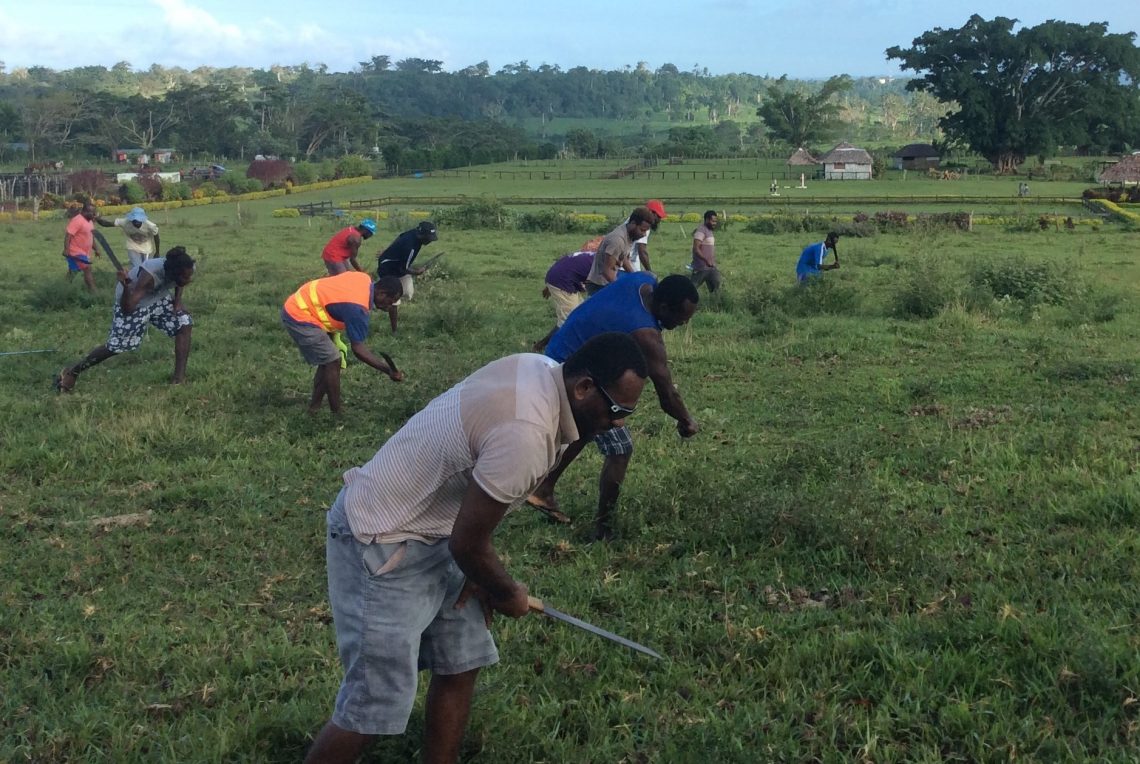 As part of the recruitment process, agents test the stamina of prospective workers for horticulture work

Writing this article five days later it is not surprising to see that it sits at the top of the Daily Post’s list of most popular articles. Such is the importance of seasonal labour to Vanuatu these days.

The Minister was quoted in the Daily Post as saying that generating revenue was the key motivator behind the decision, but Vanuatu is one of the few countries in the Pacific without a budget deficit. Unlike neighbouring Fiji and Papua New Guinea, Vanuatu’s economy is not in deficit due to the revenue generated by its citizenship/passport schemes.

The Government also said it wants more workers from the outer islands. However, published research already shows that, based on the reported island of origin, “the largest number of workers per head of provincial population was recruited from the smallest and most distant province, Torba.”

Employers and workers are entitled to feel disappointed no reference was made in the Government announcement to the level of service delivered by agents to Australian or New Zealand (NZ) farmers or to the level of care provided to workers.

As I have argued previously, the success of the RSE and especially the SWP in Vanuatu is due in large part to the role played by agents. The RSE program evolved by farmers coming directly from NZ to Vanuatu to find their workers, but the SWP was designed from the start with a central role for recruitment agents. Indeed, Vanuatu is the only SWP country to use licensed recruitment agents. It has also sent more workers to Australia than any other country. This is more than a coincidence.

There are over 60 agents licensed in Vanuatu, and clearly some provide a better service than others do. All have invested time, effort and money in establishing their agencies and incurred rental and travel costs (domestic and in some cases international). None are happy about the Government taking over their business.

A misconception about agents is that they are only engaged with recruitment and that their job is done once the workers are on a plane. Far from it. With the advent of mobile technology many agents talk to workers in the evening after they have finished work and want help, or just act as a sounding board to talk about family issues, money issues or something they may have read on social media. Individually these are small tasks, but collectively are time-consuming and important dimensions of the services provided by agents for the welfare and morale of workers.

Employers pay agents to recruit workers on their behalf. Agents need to be responsive and liked by the workers they recruit; otherwise the employer will not ask them to recruit for them the following year.

Especially during COVID-19 border closures, many agents have been busy helping workers obtain bridging visas, supporting workers unsure of their fate during the border closures, and maintaining morale and finding ways to support the recovery and navigate the system for the next intake.

Good agents do all this and more. The best agents are driven by pride and commercial success to ensure the workers are happy, diligent and working.

Can the Government do in the future what agents have done to date, which seems to be the plan? The Department of Labour is hugely under-resourced, even for its current responsibilities. It simply could not manage the workload of the SWP and RSE – more than 10,000 workers a year before borders were closed. Services to workers will suffer. It is difficult to imagine any of the public servants in this Department having the time or incentive to respond to after-hours calls from workers.

Employers will become frustrated when workers are not made available on time, when health-checks are not done, and emails not answered. Already concerns are being expressed by farmers that a government-run selection process will not take into account their needs and preferences.

There are other steps the government could take. It could reduce the number of licensed agents and enforce tighter regulation of their activity. It is especially surprising that this abolition decision should come now since Vanuatu less than a year ago adopted a National Labour Mobility Policy (dated 20 Nov 2019) which aimed at improving rather than abandoning the current agent-based system.

The Government would be much better off pursuing these priorities rather than undertaking the u-turn it has announced.

The timing is also surprising given that, as is widely acknowledged, farmers across Australia are struggling to find enough seasonal workers to bring in their crops. There is no transition period. We have been inundated with questions from employers and workers. Employers don’t have the time or resources to suddenly change their recruitment process. Some are asking: why now?  Workers, already nervous about being overseas during the pandemic, are asking: what about us?

The recruitment process has been built on years of trust. RSE workers and NZ employers have an almost family relationship and many farmers in Australia have similarly formed strong bonds with their workers and developed trust in their recruitment agents.

The one ray of hope is that so far what has been reported is a decision by Vanuatu’s Government, its Council of Ministers. To actually abolish agents, legislative change will be required. This gives the Government time to reconsider and to refocus on improving a system that has served Vanuatu well, rather than abandoning it and thereby destroying the trust and stability at the heart of Vanuatu’s SWP and RSE success.

In the meantime, the agents who have put their heart and soul into this business are asking themselves whether to pack up or wait.

Joanne Wade’s partner is a licensed agent for the SWP.

Joanne Wade
Joanne Wade is a businesswoman in Vanuatu and currently serves on the Vanuatu Chamber of Commerce.