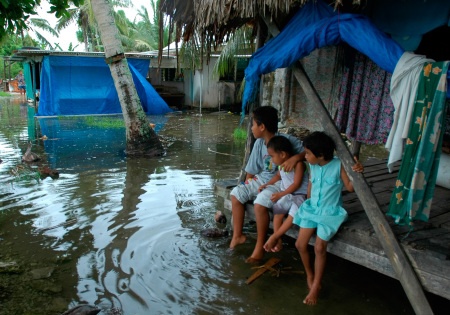 Accountability for climate finance in the Pacific

Pacific island nations need more finance, technology and information to adapt to the adverse effects of global warming, but they also need to manage these resources effectively to benefit their most vulnerable communities.

Recent global negotiations have seen pledges of climate financing from developed nations of US$100 billion a year by 2020. However accessing this finance through a complex array of multilateral and bilateral mechanisms poses major challenges for Pacific countries.

Along with other developing countries, Pacific leaders have questioned the amount and accessibility of global climate funds. Conversely, international finance providers want to see good practice in the effective use of existing resources before they guarantee further significant funds, including contributions to the newly created Green Climate Fund.

The Pacific Islands Forum Secretariat has been investigating ways that Forum island states can better utilise these resources, completing a major case study in Nauru and publishing a new report on better practice in the region Pacific experiences with modalities relevant for Climate Change Financing.

This work is complemented by Owning adaptation in the Pacific islands: strengthening governance of climate adaptation finance – a new report from Oxfam New Zealand and Oxfam Australia, launched last week at the Pacific Islands Forum in Rarotonga.

The Oxfam report looks at three countries – Papua New Guinea, Vanuatu and Tonga – to understand their experience of managing climate finance. All three are undertaking processes to build capacity of government institutions involved in adaptation and disaster response: the development of a Joint National Action Plan (JNAP) in Tonga; the creation of the Office of Climate Change and Development (OCCD) in Papua New Guinea; and the melding of existing environment and disaster response committees into new institutions in Vanuatu.

All three countries, however, face challenges to effectively utilise climate financing, requiring: improved coordination by donors; strengthened management across departments and with provincial governments; and better engagement with civil society.

The report also found many of the problems in accessing climate finance lie with the practices of key development partners. It argues there is scope for significant improvement in how donors and multilateral organisations work together to overcome the practices that limit access to climate financing and delays implementation of programs in the field. A June 2012 World Bank report on climate and disaster resilience in the Pacific, Acting today for tomorrow [pdf], acknowledges this problem, stating:

A core message stressed by research participants was that, beyond institutional strengthening of government agencies, responses to climate change depend heavily on building in-country capacity and collaboration among development actors at all levels of society. This includes the diverse array of non-state actors – from business and private sector organisations to NGOs, churches, farmers associations, women’s and youth networks, and local customary authorities.

As in other areas of development work, concern over potential corruption and misuse of climate funds has led to an increasing compliance focus that undermines the realisation of mutual accountability between partners, as well as learning, risk taking and innovation. Another finding was a tension between the political demand for financial accountability and the need for experimentation with adaptation responses. We advocate an “innovative cycle of learning”, initiating a range of trials and participatory research to provide evidence and baselines for later increases of financing and scaling up of pilot projects – especially as the new Green Climate Fund begins operations.

There are already a range of existing initiatives that require further support from donors and International NGOs (such as the formation of the inter-agency Vanuatu Humanitarian Team which allows government and civil society to work collaboratively on disaster response, or the Climate Change Network which encourages NGO, church and community collaboration, creating a joint platform to engage with the Vanuatu government and also reaching out to rural communities).

The report lists over 60 specific actions and strategies for: building capacity across both government and non-state actors; strengthened partnerships and coordination; better information, communication and transparency; fostering a culture of learning and improving direct access to climate funding through mechanisms like budget support, sectoral plans and National Climate Funds.