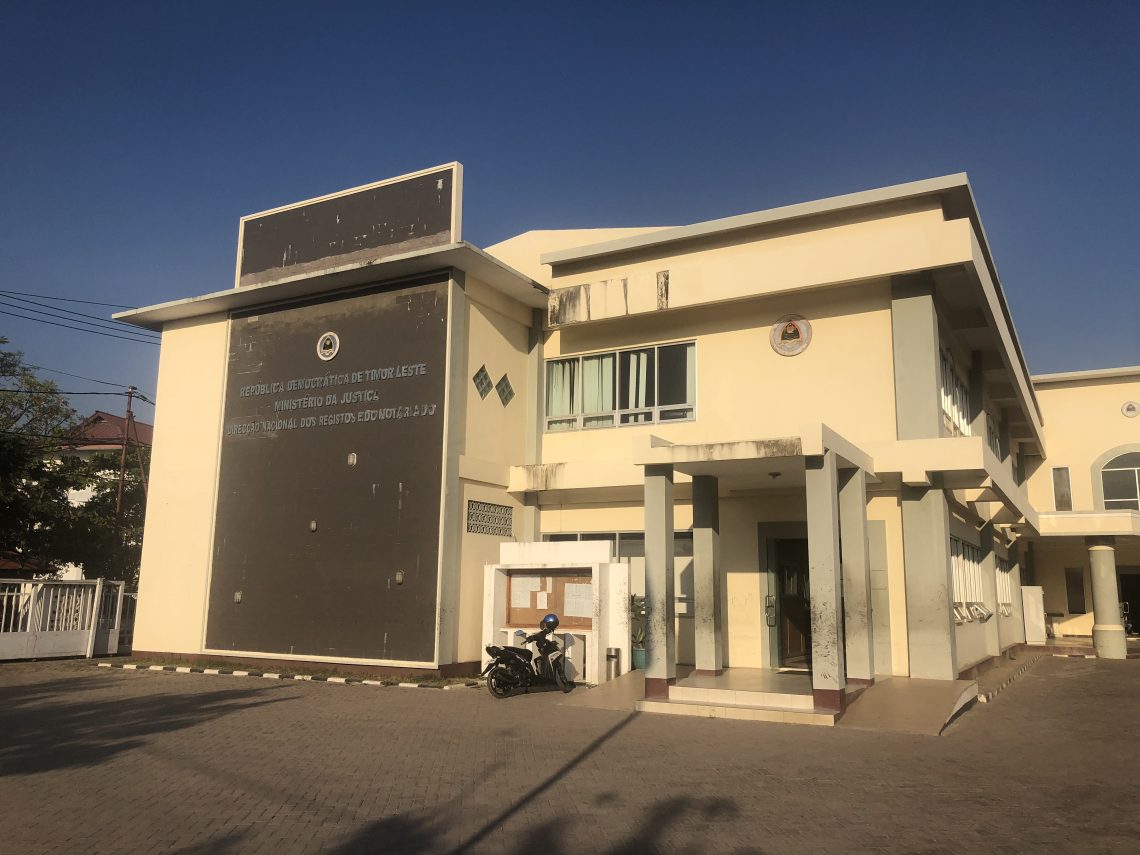 The National Registry and Notarisation Directorate in the Ministry of Justice in Timor-Leste (Photo: Gordon Peake)

Adventures in the East Timorese bureaucracy

By Joao Almeida and Gordon Peake

Timor-Leste is in the throes of a new round of political ructions, the latest in what feels like an endless quarrel. The political manoeuvring – which most recently entailed changes to the governing coalition and the voting in of a new parliamentary speaker amid raucous scenes – comes in the wake of welcome success in suppressing the spread of COVID-19.

We offer no analysis on current politics. Instead we reflect that, no matter what constellation of parties and leaders make up the government, a problem will remain regardless: a large, often inert, bureaucracy unresponsive to even everyday problems of administration, to say nothing of more systemic challenges.

We offer this story of Gordon’s doomed efforts to get a police certificate from Timor-Leste as a parable.

Gordon: I’ve been prevaricating on doing so for the longest time but last year I resolved to apply for Australian citizenship. The hardest hoop to jump through in the process is attaining ‘police certificates’ (i.e. attestations that I haven’t committed a crime) from each of the places I have recently lived. Acquiring one from Zimbabwe was easy (difficulty rating 5/10), Papua New Guinea required a bit more effort (difficulty rating 9/10), but the most challenging place of all was turning out to be my once island home. In most places this service is available online or via registered post but not in the Democratic Republic of Timor-Leste. I asked my good and old friend Joao to go down to the office in Dili on my behalf.

Joao: I visited the National Registry and Notarisation Directorate in the Ministry of Justice in order to confirm the criteria regarding ‘police certificates’ for foreign citizens that live(d) in Timor-Leste. The relevant documents required were pinned to the wall outside the office. I took a picture, sent it to Gordon, he gathered up all that was required and emailed it to me. 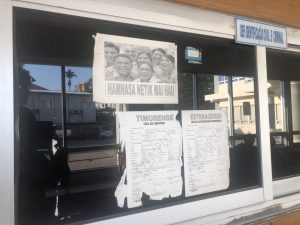 The Department of Identification and Criminal Records at the
Ministry of Justice in Timor-Leste (Photo: Joao Almeida)

On my second visit (this time with Gordon’s documents) one of the civil servants told me that the process had changed. In order to receive the certificate, the foreigner needs to physically come here in order to make the application in person. Gordon’s reaction was conveyed in a series of emojis indicating strain.

Gordon: In the middle of last year, I returned to Timor-Leste for a short bit of work. I was in Palácio do Governo, the seat of government where the offices were divided between ranks of public servants and advisers. I wasn’t there long enough to know what everyone was doing but my overriding impression was just how many people seemed to be involved in the business of government. A phrase kept going around in my mind, one coined by former Prime Minister Rui Maria de Araújo (2015–2017). He described the public service as “a giant with feet of clay”. In terms of numbers, the public service has grown only larger in the years since. I was given a planning document which estimated close to 34,000 civil servants across 150 institutions. The wage bill (about US$200 million per year) exceeded domestic revenue collection.

It was wonderful to be back in Dili, to catch up with old friends like Joao and also, finally, to get my hands on one of these elusive police certificates. The office had changed location in the years since I’d been there, part of extensive renovation of government installations. Previously, it was a poky little window out the back of the Ministry of Justice. Where I met Joao was now a grand two-storey edifice close to the Cathedral.

There was something of Gabriel García Márquez to the scene inside. The ground floor was divided in half. To the right were about ten people slumped on unergonomic metal benches looking as if they’d been there for a while. To the left, behind a set of glass window booths, appeared to be a solitary public servant surrounded by a rampart of files.

It had been the feast of Corpus Christi the day before. This may have accounted for the slow arrival of the public servants into work. But we received no divine intervention that day. We discovered that the rules had changed again. Because I’d come into the country on a tourist visa, I wasn’t able to apply in person for a police certificate.

It is also an exemplar of the daily problems East Timorese citizens face in terms of impenetrable and changeable rules and where layers of bureaucracy slow rather than streamline. Some everyday examples: attaining a form to apply for a driving licence; sitting the written test to acquire said driving licence; the practical test bounded up with getting the licence; getting a medical certificate; paying taxes at the bank; registering a business.

There has been an inordinate amount of public sector reform efforts over the years in Timor-Leste. There are certainly lots of bodies working on the issue, among them a Public Service Commission and Institute of Public Administration. The government of Prime Minister Taur Matan Ruak committed to establishing a National Agency for the Reform and Modernization of Public Administration. Supporting the public sector is a feature in most programs of donor support.

Have all these efforts worked? This story and many like it suggest not. For more, we recommend this nuanced review of Australia’s ‘Governance for Development’ program, which tackles the issue in context. Rather than cherry-picking a quote, give pages 56–62 a read. The management response is equally thoughtful.

Last week, Timor-Leste commemorated the 18th anniversary of its restoration of independence. Politics since 2017 has been characterised by tussles between political party leaders that paralyses government work. Last month the World Bank called the country a ‘nation under pressure’.

COVID-19 showed how nimbly the government in Dili can respond when the need is urgent. As we hope that the crisis continues to recede, can such urgency be concocted for something as debilitating to the long-term health of the body politic as parts of its bureaucracy?