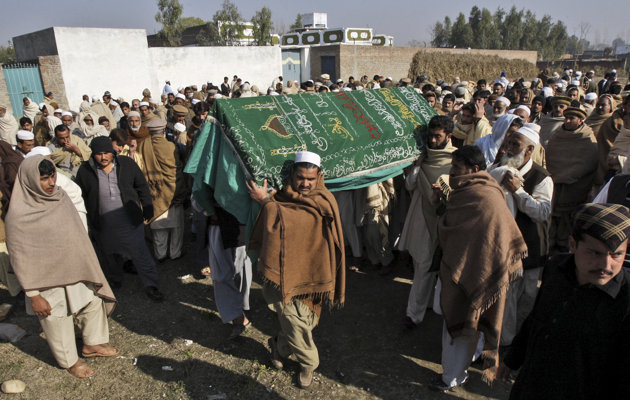 Our monthly round-up of news of Aid in and from Asia.

Risks for aid workers in Pakistan

Risks for aid workers in Pakistan are growing after a series of recent attacks.

Since December, there has been an upsurge in violence against humanitarian  aid-workers in the country, especially those working on polio eradication.

On Jan 1, seven aid workers for a local NGO were killed. In December, nine other health workers were killed, with UNICEF and WHO suspending work on their polio program as a result. The Taliban, which sees NGOs and Westerners as seeking to erode their influence, opposes the vaccination program. There has been particular opposition to vaccination campaigns after a fake CIA hepatitis vaccination drive helped to locate Osama Bin Laden in 2011.

Charles Kenny from the CGD has been among those calling for a prohibition on the CIA and other intelligence organisations from using vaccination or child health programs as a front for intelligence gathering.

Indonesia, where public concern about the treatment of the Rohingyas is widespread, particularly among the country’s large Muslim population, has pledged $1 million to Arakan state after the Foreign Minister and a delegation visited displaced persons camps. This aid figure comes on top of a significant amount of private donations from Indonesian religious charities to assist displaced Rohingya.

A report from the BBC in December showed conditions inside the Rohingya camps as being ‘some of the worst in Asia’, with aid deliveries reportedly being blocked by Rakhine Buddists.

Meanwhile, the military has stepped up its campaign against Kachin rebels on another of Myanmar’s front lines. Artillery strikes against a Kachin rebel stronghold in Burma’s northernmost state have resulted in multiple civilian fatalities. The ICRC arrived on a surprise visit this month to inspect prisons in the country and to push for better access to conflict zones such as those in Arakan and Kachin states.

Will the US give Afghanistan the cold shoulder?

US troops will only play a ‘supporting role’ in Afghanistan from Spring, opening the path for a faster drawdown. However, what will happen to aid once the troops have gone?

Currently, a brutally cold winter in the country is causing many child deaths, highlighting the poor conditions that many Afghans still endure despite aid inflows of $58 billion over the last ten years. Charities are stepping in to try to provide warm clothing for children and the UN’s humanitarian coordinator for Afghanistan has called for more international assistance to help those displaced by conflict, especially during the cold winters.

In a speech in Washington this month, John Sopko, the congressionally mandated special inspector general for Afghanistan reconstruction, expressed concerns that billions in aid dollars could be wasted if project monitoring is unable to continue after the troop withdrawal. Sopko also criticised the lack of long-range plans from the Pentagon and USAID, as well as graft, which has led to money going to waste.

And there is also no answer as yet to the question of how much aid the US is willing to commit to the country in the foreseeable future. If there are no US troops in Afghanistan from 2014, military aid will certainly dry up, but a report from ODI suggests that military health aid may have actually undermined government attempts to provide health services.

A White Paper (full text in English available here) released in December by the Information Office of China’s State Council has shown that Chinese medical aid was sent to some 73 countries between 1963 and 2011.

According to the paper, China also helped 52 countries to build 100 hospitals and medical centres, with 31 new hospital projects still under construction in 28 countries in November 2011. No costs were cited for these projects.

Japan has responded to a call for assistance from the Philippines as the territorial dispute between China and the Philippines over islands in the East China Sea heats up. Japan has long stuck to providing development aid in the region, but will now extend military aid to the Philippines to boost the capacity of its maritime forces.

The disappearance of an aid worker in Laos has led to questions on whether liberalisation in the country could be taking a step backward.

ASEAN has officially launched a Disaster Monitoring and Response System, supported by USAID. However more coordination in the region is still needed for improved disaster response.

Extreme flooding is impacting on livelihoods in Sri Lanka, with NGOs and UN agencies responding.

The Bangladesh government has given the go-ahead for a US$2.7 billion elevated metro rail project to help with congestion in Dhaka, financed by JICA.

China has extended $200,000 in aid to Syrian refugees in Jordan this month.

A major JICA-funded solar power project in Nepal has been handed over to the country’s government.

ABD announced it would support a $212 million piped water project for Vietnam and would provide $525 million over three years to support Cambodia’s growth.