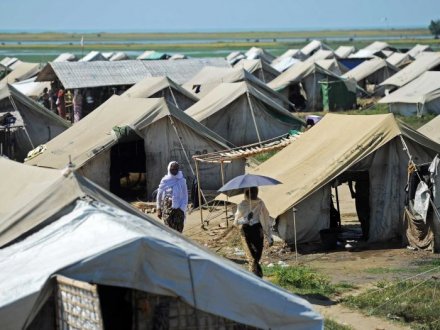 Myanmar: shaken by earthquake as conflict continues, but aid flows in

While many things are moving quickly on the aid front in Myanmar, the country was hit by a serious earthquake this month and continues to grapple with conflict in Rakhine state, compounding its challenges.

The 6.8-magnitude quake on November 11 caused a bridge and a mine to collapse and rattled buildings in Mandalay and surrounding villages. Rescue teams and aid have been slow to reach affected areas.

In development finance news, the World Bank approved its first aid to the country in 25 years, with an $80 million grant for infrastructure development. Once Myanmar clears its $900m in arrears to the World Bank and Asian Development Bank, more grants and loans are likely. Japan is helping on the debt clearing process. Myanmar’s leader also signed an eagerly awaited foreign investment bill, which could see an influx of international companies, hopefully sparking economic development.

In a more modest pledge, Australia has offered a further $2m to assist the victims of the ongoing violence in Rakhine state. More than 35,000 people have been forced to leave their homes since violence flared up in the communal conflict hotspot in October. At least 80 people have been killed, with an estimated 5,000 buildings and homes destroyed.

Medecins sans Frontieres reported that its staff have been threatened while trying to deliver aid to the displaced. The medics are treating patients with a wide range of injuries from the conflict.

Newly re-elected US President Barack Obama will visit Myanmar (as well as Thailand and Cambodia) in mid-November in another move to shore up the noticeably growing focus on Asia in US foreign policy. The Washington Post has written on why this trip is so important – and the precedent that it sets.

The UK’s International Development Secretary Justine Greening has announced that UK aid to India will end in 2015. For the background, see this March 2012 Devpolicy post, which concluded that aid to India might be a good idea, but that its days were numbered.

The announcement followed extensive debate, scrutiny and anger among the public (and the tabloid press) that aid money was being spent on a country perceived to be increasingly wealthy, though many have also noted the strong case for aid to India, still home to one-third of the world’s poorest.

The UK’s announcement that it will shift from an aid to trade approach with India has been welcomed by India’s foreign minister.

Aid to struggling Bangladesh has not escaped scrutiny in an austere Britain – the country has been criticised by The Telegraph newspaper for spending DFID funds on a ‘Question Time-style TV show’ and a phone line announcing upcoming debates in the country’s legislature.

In a relevant blog post, Jonathan Glennie explores whether countries that have graduated to middle income status should still receive aid – a question that is also pertinent to other countries in Asia besides India, such as Indonesia.

The case of 15-year-old child activist and schoolgirl Malala Yousafzai, who was shot by the Pakistani Taliban for speaking out for girls education, has captured headlines and hearts around the globe and has fuelled intense advocacy on girls education. There have even been calls for the teen to be awarded the Nobel Peace Prize.

Malala’s story has also led to a new aid initiative, with more than one million people worldwide signing a petition calling on Pakistan to pay stipends to families who send their girls to school. The country’s government has now announced that poor families with children in primary school will receive a support payment of $2 per month, funded by the World Bank and the UK as part of an extension of an existing cash transfer program.

The European Union announced this week that it was suspending $25 million in aid for Afghanistan after limited progress was made on justice sector reform.

The EU warned that its aid will be increasingly conditional on the government sticking to agreed reforms.

Foreign aid still accounts for most of Afghanistan’s budget and there are concerns it will reduce as foreign troop numbers drop. Women and girls in particular are concerned about the impact the troop drawdown could have on their rights.

India recently held talks with Afghanistan and has committed to increased cooperation, including aid for small-scale development projects.

The much talked about Asian Century White Paper has been released. It addresses many topics to do with Australia’s ongoing engagement with Asia – including aid and scholarships to encourage educational ties and learning of Asian languages.

In the White Paper, the government commits to 12,000 Asian Century Australia Awards for incoming and outgoing study. While The Australian has criticised this as mere rebranding of the existing Australia Awards scheme, scholarships for Australians to study in Asia are few and far between, and unlikely to be categorized as official development assistance.

In line with the invigorated Asia focus this month, the government announced it would start to send Australian volunteers to Bhutan for capacity building, support the Indonesian Institute for Peace and Democracy and spend $100 million over the next four years to fight malaria in the region.

Meanwhile, PM Gillard used her speech at the Asia-Europe meeting in Vientiane to call for more aid for the world’s poor and to highlight China’s role in shoring up global growth.

A civil society group has called on the US to ensure that military aid to Cambodia is not used to commit rights abuses, to protect private property or to assist in forced evictions, which are an ongoing issue in the country.

The Japanese government has announced it will spend $700 million on disaster prevention and environmental projects in Central Asia.

Seven years after a destructive earthquake, the positive impact of post-disaster aid is clear on Nias island off Sumatra, Indonesia.

Construction on the controversial Xayaburi Dam has begun on the Mekong, while environment groups worry about its impact on the catchment.

The World Bank has approved some $70m of credits to help Vietnam deal with climate change. JICA, AusAID, the French Development Agency and Korea’s Eximbank will also support the project.

JICA will issue a $250m loan to extend the capabilities of Uzbekistan’s Navoi thermal power station.

Japan is also offering up a solution for the flood-prone and sinking Indonesian capital Jakarta — high tech underground reservoirs.

A peace deal in restive Mindanao in the Philippines has paved the way for aid from Japan.

Developing countries, including many Asian nations, will be pushing for adaptation and mitigation finance at the Doha climate talks, which begin on November 26. Key financing issues for Doha are covered by this Devpolicy post.