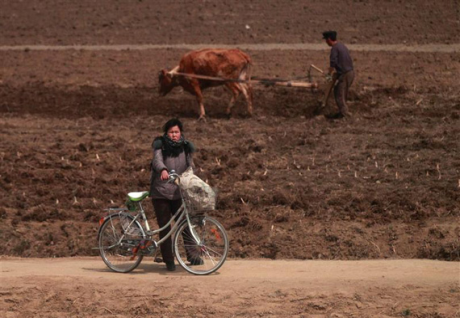 South Korea’s most popular presidential hopeful has signalled a shake-up for the country’s aid while on the campaign trail. Moon Jae-in has stated that if he is elected in December, he will offer no-strings-attached economic aid to North Korea.

But for aid flows to commence on the divided peninsula, the North would have to accept. The widespread flooding in North Korea has recently had the South pondering a change to its current policy of no engagement, with NGOs from the South undertaking talks with the North on the provision of relief to those affected by the devastating floods. The North, however, was slow to respond to the offers of assistance. The North then accepted the offer of assistance — then declined it again just two days later. It has been speculated that the aid offer was declined because it did not include rice, cement or heavy equipment — however, North Korean pride and strategic considerations may have also played a part.

India, the world’s eighth largest recipient of aid but also an emerging superpower, looks set to expand its presence as a donor, with the beginnings of a new body to govern India’s ODA, called the Development Partnership Administration (DPA). The body has arrived on the scene with minimal fanfare, with a goal to consolidate and streamline India’s outgoing aid.  Prime Minister Manmohan Singh welcomed the establishment of the body as part of India’s expanding political and economic engagement.

Also this month, a historic visit to Mumbai by China’s defence minister aimed to improve military ties between the two superpowers of Asia. The complex relationship between the two countries has played out through diplomatic aid channels — China has donated aid to Sri Lanka and the Maldives while India is becoming more engaged with Vietnam.

In recent weeks there has been a flood of media on the impact that the withdrawal of troops and international organisations from Afghanistan will have on the still-fragile country.

The decreasing numbers of foreigners is reportedly already impacting on local businesses and the broader economy. Wealthy Afghans and war entrepreneurs uncertain of the future at home are spending on property in Dubai. New research undertaken in the province where Australian military and aid is concentrated, Uruzgan, argues that benefits from aid have been neutralised by corruption and tribal politics. It all adds up to a whole lot of scepticism that the country is stable enough and prepared enough to stand on its own.

The withdrawal of international forces will also lead to big changes for aid workers — those from countries such as New Zealand will have to transition to working without protection from their national military.

There have also been questions raised on the impact of international aid on development indicators in the country. A UN-backed survey released this month has found that a third of young children in Afghanistan are acutely malnourished, a figure similar to that in famine zones — with aid workers in the region ‘caught by surprise’ by the results.

The European Union and ASEAN are in talks about capacity building aid to boost the ability of Southeast Asian countries to tackle disputes. While details of any agreement had not yet been confirmed, the cooperation would include skills and technology transfer to boost capacity in conflict management and resolution.

Meanwhile, at the 44th ASEAN Economic Ministers meeting in late August, the six older members of ASEAN pledged to further assist newer members — Cambodia, Laos, Myanmar and Vietnam — to build their economies and close the development gap between members of the regional group.

ASEAN delegates meet again this week in Indonesia for the Intra-Parliamentary Assembly.

Conflict continues in Burma’s Rakhine state and aid workers trying to deliver basic services to the huge population of displaced persons are facing a multitude of challenges, not least – the risk of prison. Some 10 aid workers were detained for “questioning” by authorities in Rakhine state and three have now been sentenced to prison in highly secretive court proceedings.

Despite this risky operating environment, donors and aid agencies are still responding to the humanitarian need. Indonesia has sent aid through the Red Cross, along with other members of the Organisation of Islamic Cooperation. Representatives from the Indonesian government also visited the country on a humanitarian mission, stressing the importance of the Burmese government granting citizenship to the minority Rohingyas. Australia has also pledged assistance for 14,000 displaced persons.

Singapore is looking to increase business opportunities and collaboration with African nations through the signing of a partnership with the Republic of Congo and Singapore Cooperation Enterprise.

The Singapore Cooperation Enterprise has also signed a contract with the Mauritius government to share expertise to set up a Light Rapid Transit system in the country. With Mauritius labelled as one of Africa’s first ‘tiger’ economies, and a small island like Singapore, this technical collaboration appears to be a very logical fit.

The president of the Japan International Cooperation Agency has talked on the importance of aid and called on the Japanese government to increase its allowances for ODA.

India has stated its support for Palestine’s independence and contributed $10 million in aid.

China has been mobilising humanitarian aid domestically to assist those affected by the Yunnan earthquake on Sept. 7 and the subsequent aftershocks. South Korea has also pledged assistance.

For the third year in a row, Pakistan is suffering from extensive flooding and international aid agencies such as Red Crescent are providing relief.

The UK’s Daily Mail newspaper is attacking the government over an alleged five million pounds of aid money to India being ‘frittered away’ on consultants.

The U.S. Navy is reportedly spending more than $20 million each year sending ships to Asia-Pacific nations to provide cataract surgery, dental fillings and other medical care.

The APEC Leaders’ Week this month in Vladivostok addressed key issues such as food security, the ongoing conflict in Burma’s Rakhine state and territorial issues in the South China Sea.  The summit closed with leaders declaring to focus on economic development in the region. Leaders also agreed to cut import duties on environmental goods.

US Secretary of State Hillary Clinton visited more countries in the region, including Timor-Leste. Her visit was seen as a diplomatic boost for the country as it vies to become a member of ASEAN. While there, Clinton announced $6.5 million in scholarships for students to study in the US.

China and New Zealand are working together on an aid project for the first time, to deliver improved water mains to the Cook Islands.

Islamabad has expelled Save the Children’s staff from Pakistan after allegations the NGO helped facilitate meetings that led to the discovery of Osama bin Laden.

A newly released report cites the drop of child deaths in countries such as India, Laos and Timor-Leste as proof that aid is working.

Will rising drug use compound development challenges in Burma?

USAID has filed fraud charges against a Philippines anti-trafficking NGO.

Cambodian public health experts have said that even if a vaccine is found for dengue, the country likely won’t be able to afford to buy it.

A new book analysing aid in South Asia has been recently released, gaining positive reviews for its contribution to knowledge on aid in the region.

Will Vietnam need a loan from the IMF to bail out its banking system?

A new paper examining the growth and diversification of international involvement in urban planning and development in Phnom Penh has been released. The paper shows how various forms of international finance capital, development capital and local capital vie for influence in the city.