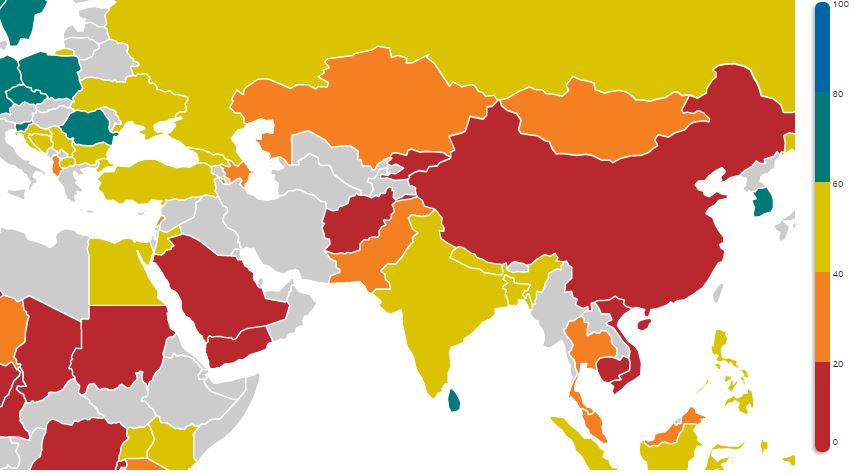 Budget transparency is a necessary ingredient of good governance. It can foster effective allocation of resources and thus promote development. The Open Budget Survey [pdf] in 2008, however, found that aid dependency tended to be inversely correlated with budget transparency, in the form of public access to detailed and timely budget information. The more aid-dependent a country, the less transparent its budget. So, does aid dependency hinder budget transparency? The answer is no.

The survey found that countries with a high level of aid dependency, as measured by Open Budget Index (OBI), suffer from a deficit of transparency. Eighteen countries that received more than 10 percent of their GNI in foreign aid, and 12 countries that received between ten and five percent of their GNI in foreign aid, received average OBI scores of 22 and 28, respectively (on a scale of 0 to 100). By comparison, countries with a low degree of aid dependency (aid <5% of GNI) received an average score of 62. The survey thus claims, ‘budget transparency worsens as aid dependency increases’.

Paolo De Renzio and Diego Angemi in fact show that the level of aid does not explain budget transparency. Based on an assessment of 16 aid-dependent countries, they found that OBI scores are not linked with either overall development or aid dependency. Rather, ‘OBI scores are more closely correlated with democracy variables and with an index of donor engagement which tries to capture the quality rather than the quantity of aid flows to each country.’

In-depth case studies allow us to explore the multiple driving factors influencing budget transparency and how they interact with each other. Do the interactions of different factors reinforce or undermine transparency?

Afghanistan represents a unique case. In my paper, Improving the Fragile States’ Budget Transparency: Lessons from Afghanistan, I show that despite high and increasing levels of aid dependency, Afghanistan’s budget transparency has dramatically increased. Aid’s share of GNI in Afghanistan rose to 78 percent in 2011 from 72 percent in 2008. Meanwhile, its OBI score rose from eight in 2008 to 59 in 2012 [pdf], slightly above the global average—the same as Poland (an emerging donor) and above Pakistan (score of 58), with aid’s share of GNI in Pakistan being only one percent in 2012.

The interactions between different stakeholders, such as government, donors, legislature, and civil society, and budget reforms paved the path to improving budget transparency in Afghanistan. The government, with the Finance Ministry’s budget directorate having a central role, wanted to improve its credibility in the eyes of citizens and donors. Donors conditioned the flow of their budget support aid to the reform of public financial management systems. And civil society actors demanded more information on the government budget. Parliament also played a significant role by pressing the government to prepare detailed reports. Despite various deficiencies, real progress has been made.

The good news thus is that, with right incentives and demand, governments can significantly improve budget transparency. We should, however, note two caveats. First, improved budget transparency does not always reduce corruption. In 2015, Transparency International, which measures the perceived level of corruption around the world, rated Afghanistan 11 out of 100, one of the worst ratings for any country.

Second, in aid-dependent countries, the government budget does not always represent (all) of public expenditure. As discussed in my recent blog, foreign donors often spend a significant portion of aid outside the recipient budget.

The outcomes of transparency efforts, therefore, are closely linked with how different stakeholders act, and how institutional measures are implemented. Aid dependency does not seem to explain a lack of budget transparency. The right incentives and demand arising from interactions among different factors can make a country’s budget less or more open.