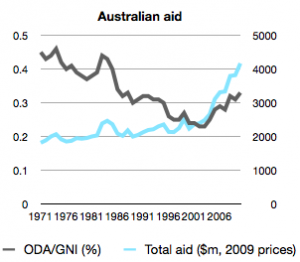 This is the a summary of the first installment of the Aid Open Paper, a series of articles that look at different aspects of scaling up Australian aid. In this first section, we set the scene by considering recent patterns and trends in Australian aid. How much aid does Australia give? Where is it spent? What is it spent on? How does Australia compare to other donors? We hope that you will find this overview interesting and informative. It is not intended to be exhaustive, and we encourage you to share ideas and provide feedback. 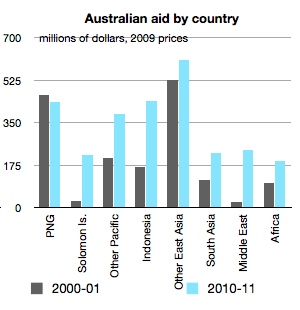 2. There has been a shift in aid from PNG and East Asia to Solomon Islands, Indonesia, and Iraq and Afghanistan. Aid to every major country and region is up, except for PNG. The biggest increases have been in:  aid to the Solomon Islands (due to the RAMSI stabilization intervention), up from from $27 million in 2000-01 to $216 million this year; aid to Indonesia (due to the Tsunami response), up from from $169 million to $440 million over the same period; and aid to Iraq and Afghanistan, for obvious strategic reasons – Middle East aid (which largely goes to these two countries) is up from $26 million to $237 million over the same period. Aid to South Asia and Africa has roughly doubled, but so has the overall aid program, so their share of the program has remained the same.

3. Governance is the biggest spending area for the aid program, though in recent years the biggest increases have been in rural/environment and infrastructure. In the first half of the last decade, increases in aid were targeted at governance. Improving governance is a worthwhile but difficult objective, and by 2005, the “governance first” strategy was starting to run it course. Since 2005, governance spending has been held steady in real terms, and we have seen large increases in funding to education, health, infrastructure and rural/environment. Note though that governance remains the largest area of spending and that even within other sectors a significant proportion is spent on sector-wide governance. 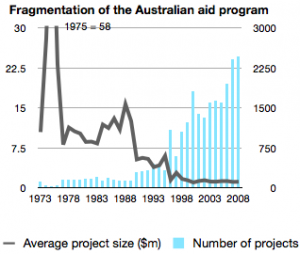 7. Project size has fallen over time. Aid is given through projects. In 1973, the first year for which data is available, Australian aid supported 123 projects. By 1983, this had grown to 211, by 1993 454, by 2003 1,598 and by 2008, the most recent year for which data is available, 2,476. Average project size fell from $20 million in the 1970s, to $10.7 million in the 1980s, $3.6 million in the 1990s and $1.3 million last decade. This tendency towards more, smaller projects is known in the aid industry as ‘fragmentation’. It tends to escalate the administrative and transaction costs associated with aid. These can be especially serious for recipient governments, some of whom run the risk of being overwhelmed by the costs of trying to administer a thinly-spread aid program. If the average aid project size is not increased, then by 2015, we will have some 6,800 projects. That sounds unmanageable, and undesirable, and almost certainly is. Scaling up will have to mean not only more but larger projects.

There is much more that could and needs to be said about recent trends in Australian aid, but the aim of the first section of the Aid Open Paper is to provide a broad introduction and context. More specific issues will be taking up in the coming months as different topics are addressed. We look forward to your comments and feedback as we move forward.

Download the full PDF version of the section of the Aid Open Paper on ‘Patterns and Trends in Australian’ Aid here.