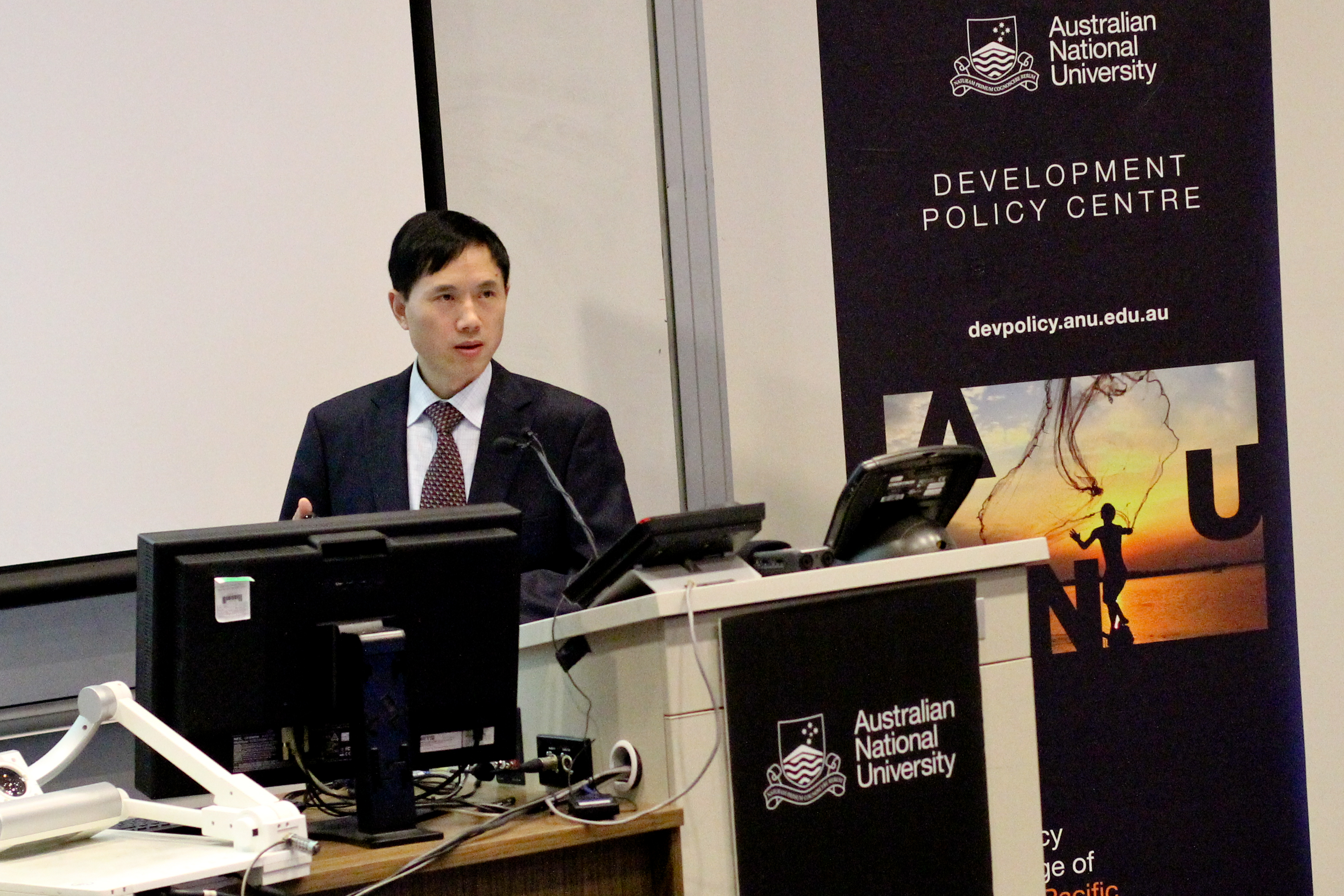 The 2015 Australasian Aid Conference held at the Crawford School on 13-14 February offered participants a unique and rare opportunity to hear about the controversial Asian Infrastructure Investment Bank (AIIB) from the point of view of the Chinese government. Since the Chinese first announced the initiative in October 2013, the multilateral development bank has been touted by many in the international aid community as the most contentious development issue of 2014 and 2015. Australia, along with America, Japan, South Korea, and others have raised issue with the bank’s lending policies, governance structure, environmental policies, and transparency standards. Australia continues to to-and-fro on whether it will sign on as a founding member.

At a well-attended plenary session, Zhou Qiangwu, Executive Deputy Director-General of the Asia-Pacific Finance and Development Centre, a think tank funded by the Chinese Ministry of Finance, directly addressed these issues (a podcast of his presentation is available here). Clearly trying to garner support for the bank amongst a receptive audience of government workers, academics, and aid workers, he presented the bank in a very favourable light as a multilateral development bank desiring to emulate current international standards.

The clear message of Mr Zhou’s paper was that China genuinely wants to establish a best practice multilateral with high governance and safeguard standards. He stressed that the AIIB’s governance structure was something that needs further negotiations and that they were looking to follow, with advice, the international practices of other multilateral development banks, such as the Asian Development Bank (ADB) and World Bank. Notably, both these banks have expressed an interest in working collaboratively with the AIIB, potentially co-financing projects.

Mr Zhou stressed that China was sincere in is invitation for other countries to join the AIIB, as China sought to learn from their experiences and heed their advice. These intentions are embedded in the bank’s principles of openness, inclusiveness, and a commitment to high standards. He noted that, for example, all the bank’s senior management will be recruited in a transparent manner. However, while keen to model themselves on the ADB and World Bank, and take advice from other countries, Mr Zhou did note that there is no such thing as agreed international best practice, and that the AIIB would have to adopt systems and structures that suit the Asian region. Ultimately though, China wants to extend its influence in the region and to do that the AIIB has to be a credible and respected multilateral organisation, which will only come about with sincere and transparent policies and practices.

China’s other reason for genuinely extending the hand of friendship to other countries to join the AIIB is to attract AAA rated countries. Mr Zhou named this as a second major challenge for the bank. Having AAA countries as founding members will allow the AIIB to borrow competitively in credit markets. However, to attract this membership China is going to have to convince some traditional donors to join, some of whom have expressed strong opposition to the bank’s establishment. New Zealand, as the first developed country to sign on as a founding member, is a step in the right direction for China and their membership may make other AAA rated countries consider signing on.

So, the question remains: should Australia join the AIIB? The bank is clearly a child of China: it is China’s brainchild, the Chinese will have a higher capital ratio than other founding members, and the bank will be headquartered in Beijing. But China’s expanding influence in the region through its economic footprint is something that needs to be accepted and the AIIB has come about in response to a genuine, growing need for infrastructure investment in Asia.

The AIIB has a sole infrastructure mandate, aimed at funding the perceived gap in the current multilateral development bank landscape of infrastructure investment in Asia. The ADB has estimated that US$8 trillion will be needed between 2010 and 2020 for infrastructure investment in Asia. The ADB and World Bank currently fund the bulk of this, but there is a large and growing gap between demand and supply — enter China and the AIIB. In October 2014, 21 countries signed a Memorandum of Understanding, which established the AIIB. Since then, several more countries have joined bringing the total number of founding members to 27. New Zealand is the most recent addition, having signed on in January 2015.

As a founding member, Australia could place itself in a unique position — the AIIB will be globally influential and Australia could play a guiding role and ensure that the banks policies are in the best interests of developing countries rather than saddling them with debt. However, it is easier to shape institutions by joining at the beginning. Australia’s concerns regarding the governance of the bank have already been somewhat addressed by the Chinese. In August 2014 Australia gave China nine governance provisions that it would like to see adopted by the AIIB, and Minister for Trade and Investment, Andrew Robb, later reported that China would include four of the nine recommendations and had adapted the other five.

The bank will go ahead whether Australia joins or not. But the more countries that join the less China-dominated the bank will be. Either way, Australia needs to make decision soon — Mr Zhou made clear that the opportunity join the AIIB as a founding member will expire at the end of next month.

Dr Katherine Harper holds a PhD in Classics and Ancient History from the University of Sydney. She now works in the aid sector and has an interest in the strategic nature of development assistance. The views expressed in this article are entirely her own, and do not represent the policies or views of any affiliated organisation.

Katherine Harper
Dr Katherine Harper holds a PhD in Classics and Ancient History from the University of Sydney. She now works in the aid sector and has an interest in the strategic nature of development assistance.