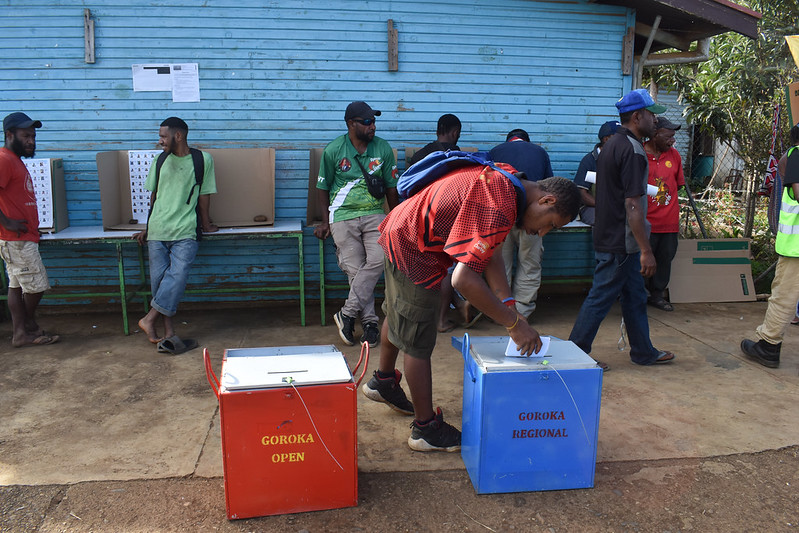 Papua New Guinea’s Organic Law on the Integrity of Political Parties and Candidates (OLIPPAC) was designed to bring stability to PNG’s parliament and political parties. Since its introduction in 2001, major parts of the law have been ruled unconstitutional, and a number of academics have questioned the law’s impact. In this blog I will show that OLIPPAC has had one clear impact on PNG’s politics, although its effect wasn’t necessarily one that the law’s designers were intending.

To demonstrate this, I am going to use a measure called the effective number of parties (ENP). The ENP is a measure of whether a country’s parliament is dominated by a few large parties, or whether parliamentary power is fragmented among many small parties. In an earlier Devpolicy blog post Maholopa Laveil used it to compare party fragmentation in PNG with other countries.

To calculate the ENP the following formula is used: the ENP is the reciprocal of the sum of the squared share of seats won by each party. In strong established political party systems, with just a few major parties, the ENP is usually lower than 3. When the ENP is higher than 3, it indicates a system where political competition is fragmented among many parties.

In 2006 Henry Okole, in his paper ‘The “Fluid” Party System of Papua New Guinea’, applied the ENP to show that PNG’s party system had become increasingly fragmented after independence. Okole argued the ENP increase from 3.39 in 1972 to 16.16 in 2002 showed how under-developed PNG’s party system was. 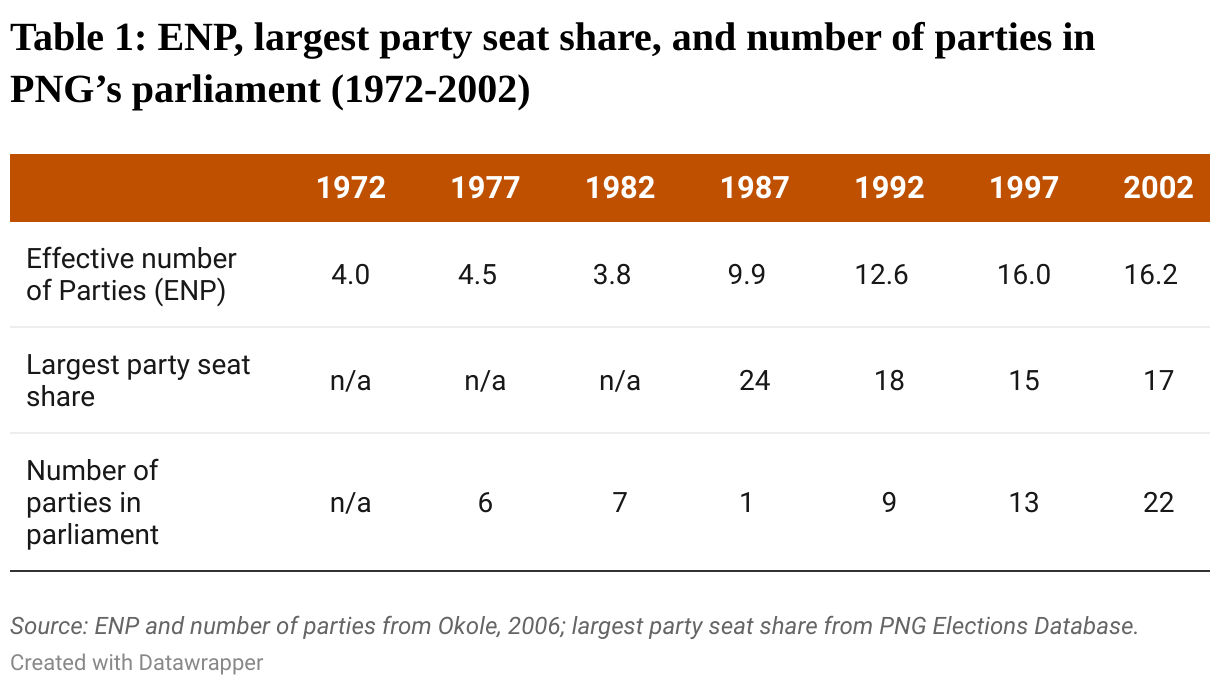 OLIPPAC was supposed to address the fragmentation in the party system and promote the development of political parties in PNG. As many commentators have noted, OLIPPAC has not brought a stable, strongly institutionalised party system in its wake. Unnoticed by most observers, however, there has been a clear fall in the ENP since OLIPPAC was introduced.

Calculating the ENP is difficult in PNG as it involves deciding how to deal with independent MPs (in this analysis I have simply excluded them when I have undertaken the calculation). However, the same trend visible in the ENP data is also visible in a simpler statistic, also shown in the tables above, which isn’t affected by independent MPs: the share of MPs in the largest party after each election. By both measures party fragmentation has fallen.

Why has this occurred? The answer is to do with section 63 of OLIPPAC (the amended 2003 legislation). Section 63 states that the registered political party with the most elected candidates after each election will be invited to form government. This doesn’t guarantee that the party will succeed in pulling together a governing coalition, but it does give that party an important first mover advantage when government is formed.

And so section 63 of the OLIPPAC has increased the importance of the largest party in the process of forming government in PNG. The consequence has been an influx of MPs joining the political party that has occupied the executive government prior to each election since 2002. As a result, party fragmentation as measured by the ENP has fallen.

This is not quite the same thing as strong stable parties being formed. Indeed, the fortunes of individual parties still fluctuate rapidly at times: the National Alliance, for example, elected 27 MPs in 2007, but only seven in 2012. And, as the tables above show, the actual number of parties with MPs elected to parliament in each election has not fallen since OLIPPAC was introduced. Nevertheless, the fall in the ENP, and the rising electoral power of the leading party at election time, is an interesting change in PNG’s political dynamics. Sometimes political rules can have surprising consequences.

Russel Yangin
Russel Yangin is a lecturer in political science at the University of Papua New Guinea.