An uptick in donations to Australian NGOs

By Terence Wood and Jonathan Pryke

In terms of private donations, the last 10 years have not been kind ones for Australian development NGOs. The chart below shows trends in private donations to Australian NGOs who are members of ACFID (most of Australia’s large aid NGOs) combined with donations to Médecins Sans Frontières and Compassion Australia (the two largest Australian NGOs who are not ACFID members). Once inflation is taken into account, despite a growing economy and growing population, donations have yet to reach the level they were in the 2004/05 financial year (the year of the Indian Ocean Tsunami). This was an anomalous year of course, but donations were also lower in 2012/13 than they were in 2009/10 (there are some data issues which mean that numbers aren’t exact, but they are reasonable approximations).

This apparent flatlining of donations to NGOs is something we’ve written about previously here at Devpolicy. Yet, the most recent year’s data (included in the chart below) possibly tell a happier story. The 2013/14 financial year was the second consecutive year in which the inflation adjusted volume of donations grew. In 2013/14 they grew 3.4% (compared to an inflation adjusted GDP per capita growth rate of only about 0.8%). 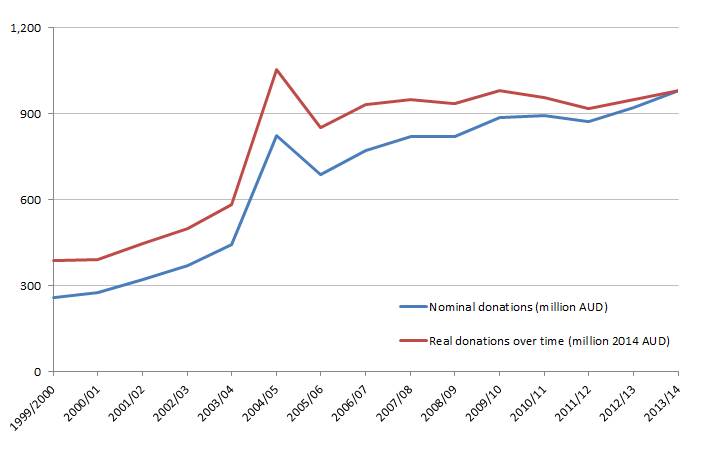 Quite what this uptick means is not yet clear. It could (unhappily) simply be the by-product of a rise in humanitarian disasters. On the other hand it could (more happily) be a by-product of NGOs becoming better fundraisers, or (more happily again still) a sign that the Australian public has become more aware and concerned about the plight of others, outside of Australia’s borders. Finding out which of these explanations is correct will require more data and more number crunching. As we look into this we will keep you posted.

Data for the chart can be downloaded here. Data sources are ACFID annual reports (and, in some instances, individual NGOs’ annual reports).