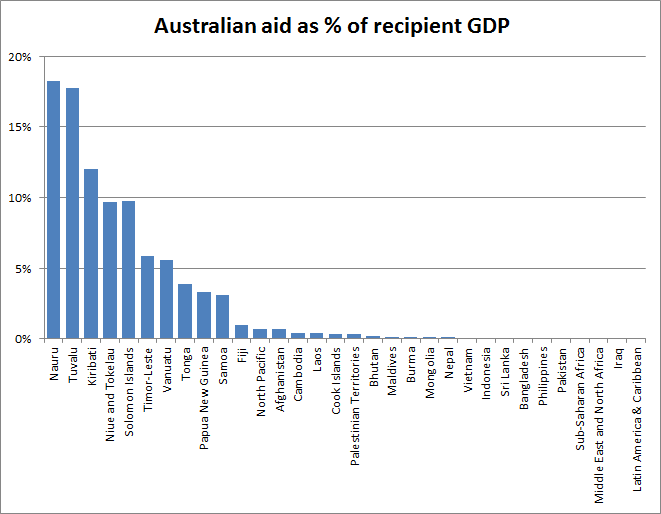 Australia’s billion-dollar aid cut: where to cut a billion dollars in a hurry

Let’s be clear from the start: there’s no good way to decide where to cut one billion dollars from a five billion dollar aid program in just six months. Indeed, there’s no good reason to make the cut. Aid is less than 1.5 per cent of Australian federal government spending: too small for changes to have any real impact on the country’s fiscal health. Yet the cut will hurt people in developing countries. And it may well hurt Australia too. Promises will have to be broken in the international arena, and international goodwill (of the sort that helped get Australia onto the UN Security Council, for example) may be eroded.

At the very least, if cuts must be made, they should be made more slowly — over the space of several years. If this was the case, aid could be cut judiciously following careful performance assessments. But this won’t be possible in a space of six months. Only blunt heuristics will be available to guide the knife.

Reflecting these circumstances I’m going to offer two guides for where the cuts should land — guides geared to minimising development damage. Neither is great, but they are better than nothing, and combined they offer something to work with at a time when political decisions have ensured there is no good way forwards.

Both guides have the same underlying logic: minimising the ‘shock’ felt by any particular country as Australian aid is cut.

The first guide compares Australian aid to recipient countries’ GDPs and prioritises cuts in countries where Australian aid is small in comparison to GDP. The logic to this is simply that when aid is small in comparison to the recipient economy in question, the overall economic shock will be minimal. This is not a perfect means of choosing where to cut aid — it doesn’t guarantee that individuals currently benefiting from good aid projects won’t be hurt, but it does minimise the likelihood that whole economies will be buffeted by the cuts.

The chart below shows Australian aid as budgeted for the 2014/15 financial year as a percentage of recipient GDP. (For detailed descriptions of the data, sources, assumptions and limitations see the detailed note here. For now, the most important points to note are that, where country groupings are used rather than individual countries, this reflects the way DFAT has laid out its most recent aid budget data. Also, the Australian aid amounts used in the calculations for the chart are those from the DFAT country budgets for each recipient country, and so exclude Australian aid that may go to a recipient country via multilateral aid or other Australian government departments.

Certainly for countries where aid is more than five per cent of GDP, and probably for countries where aid is more than two per cent of GDP, a major aid cut would be risky (and one might err on the side of caution in countries such as Fiji, where the political situation is complex). This suggests that, with the exception of Niue and Tokelau where GDP data
are questionable and whose situation is supported by their relationship with New Zealand, there are a clear group of Pacific countries (and Timor-Leste) where large aid cuts would be unwise.

Aid to GDP isn’t a perfect guide though. There are limitations: countries can have large economies without much of this wealth trickling down to the average person, meaning the need for the sorts of services aid can fund remains high.

This brings me to my second guide to where cuts should fall. This approach focuses on reducing ‘aid shock’ by avoiding cuts to aid in countries where Australian aid is a large slice of overall aid. The figure below reflects this approach (for data details see the data notes referred to above). As with the chart above, each bar is an Australian aid recipient but this time the Y-axis plots Australian aid as a percentage of total aid. 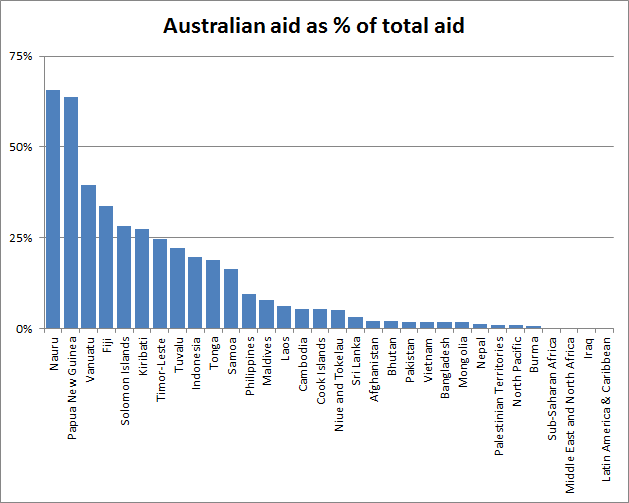 The charts aren’t identical, but there is considerable overlap at the upper end. Both charts suggest there are a number of Pacific countries (and Timor-Leste) where cuts could be expected to cause significant shocks. The overlap isn’t complete though, and so in this spreadsheet I have calculated the weighted average of each country’s rank in the two measures (the other sheets of the spreadsheet show background workings for the charts and detail data sources). Importantly, because most countries where Australian aid is high as a percentage of total aid are also countries where Australian aid to GDP is high, or countries such as Indonesia where other donors have started giving less because aid is needed less, it is, I think, reasonable to treat the aid to GDP measure as more important than aid to total aid measure. Reflecting this, I have weighted the average in favour of aid to GDP (0.75 to 0.25). If you disagree, you can change the weighting in the spreadsheet in cell E1 and see re-calibrated results (you can change any of the yellow cells in the spreadsheet, the rest of the cells are locked, though you don’t need a password to unlock them).

From the weighted average I’ve then (in the same spreadsheet) targeted where I think the cuts should fall in a way that minimises overall damage. The table below shows the output of this in its third column, where I’ve suggested a percentage aid cut. Once again, you may disagree with the percentage cut I’ve suggested for each country (rankings aren’t everything: perhaps, for example, you think the humanitarian situation in Palestine requires aid there not be cut). If you do disagree, go into the spreadsheet and change the percentage values in column G to values you think more appropriate and the changes will be reflected in the spreadsheet calculations. The final column of the spreadsheet shows the cumulative savings as they total over each of the recipient countries.

In addition to country savings, in his recent blog post, Robin Davies suggested savings could be found from regional programs of between 10 and 20 per cent (which I’ve averaged to 15 per cent for a total saving of $47.3m), as well as a ($351m) saving from ‘Cross Regional Programs’, further savings from UN and Commonwealth organisations ($32m), central NGO and volunteer programs ($20m), DFAT departmental spending ($50m) and aid given via other government departments ($39.2m). All up these savings tally to $539m. For the sake of easy maths and also because, pessimist that I am, I doubt all these savings will be realised, I’ve rounded this down to $500m, which leaves another $500 million to be found from country aid programs. Which, give or take a couple of million dollars, is what the savings tally to in my table. 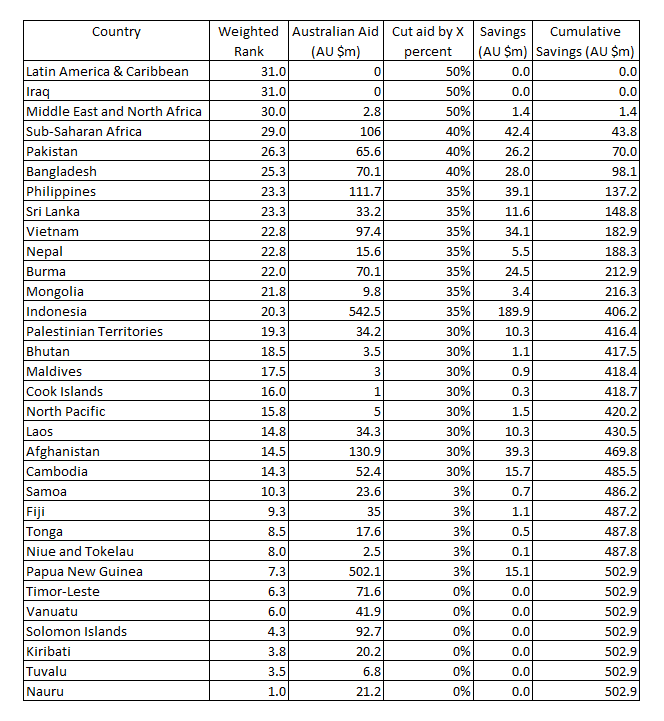 And that’s how I would suggest cutting one billion dollars from an aid program in a hurry. In practice my approach means big cuts born by parts of Asia and sub-Saharan Africa, so as to spare the Pacific. Such cuts are far from ideal, but it is hard to see a better alternative at this point.