Last month, the Center for Global Development (CGD) in Washington released its 2017 Commitment to Development Index (CDI). This annual ranking assesses 27 of the wealthiest countries on the impact of their aid, finance, technology, environment, trade, security, and migration policies on developing countries.

Overall, in 2017 Australia ranks 18th of 27 countries, with a score of 4.88. Whether this middling position represents a good result or under performance is, to some extent, in the eye of the beholder. Denmark, the top ranked country, scored 5.71; South Korea came in at the bottom of the ranking with a score of 4.48. Figure 1 below shows how Australia ranked in each of the sectors included in the index. In the rest of this post, I’ll highlight just a few of the CDI findings for Australia, and my reflections on them. 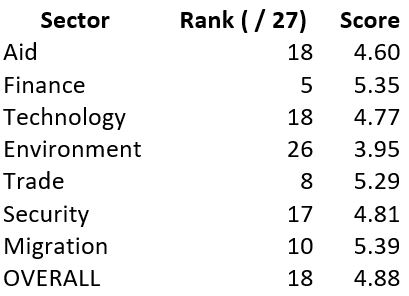 Aid is the sector of the index that interests me most, so I’m going to begin there. While Australia unsurprisingly ranked below average on aid quantity, thanks to our ODA budget dropping to the lowest level ever as a percentage of GNI in the 2016-17 budget, Australia’s aid program ranked highly on aid quality. This positive result is attributed to its transparency; share of untied aid; and low administrative unit cost.

As a co-author of our aid transparency audit, which last year concluded that there has been a decline in the project-level transparency of the Australian aid program, I obviously dispute the first point. Also, one could argue that a substantial proportion of Australian aid remains informally tied – for example, scholarships granted by the aid program to students in developing countries, which flow to Australian universities. These scholarships make up close to 9% of the 2017-18 Australian ODA budget.

It’s not immediately clear whether discrepancies in these assessments of Australia’s aid quality are simply the result of differences in definition, or from real changes in performance over time that have not been captured in the latest CDI. I note however that the most recent Quality of ODA (QuODA) report, which is the source of the aid quality data that feeds into the CDI, was published in 2014. And in fact, the underlying data provided by the CDI authors shows that Australia’s QuODA score has remained unchanged since 2011. Yet the reality is that much has changed in the aid program in the intervening period (as documented in our 2015 Aid Stakeholder Survey), with detrimental effects on quality. The use of outdated data perhaps also explains why Australia’s CDI aid score has remained virtually unchanged since 2003 (Figure 2), again despite tremendous changes in the aid program’s size and shape over that period.

Source: CDI 2017 Australia country report. Note that this graph shows Australia’s aid score, not ranking as compared to other countries, over time.

So, I’d argue that Australia’s 18th place ranking in the aid sector, while not particularly high, nevertheless positions Australia more favourably than it perhaps ought to be. Chalk one up for glass half-empty.

Under the technology sector of the CDI, another finding that caught my eye was Australia’s government support for research and development (R&D). Australia ranks 18 of 27 in this sector, which we are informed is mainly due to the government’s relatively low levels of expenditure on R&D as well as limited incentives for business R&D. Based on data reported to the OECD, the Australian government invests 0.41% of GDP (weighted) on development-related R&D, in agriculture, environment, energy, education, health, and more. (The criterion also includes R&D related to ‘Exploration and Exploitation of Earth and Space’ – something for Australia’s future space agency to look into?). The recommendation to spend more on R&D mirrors what Stephen Howes and I recently called for in a new report: increased Australian investment in global medical research.

Lastly, Australia’s ranking on migration has slipped, falling from 3rd place in 2016 to 10th in 2017. As in previous years, the CDI found that Australia has strong integration policies for newly arrived migrants, and topped the charts on hosting tertiary students from developing countries. The report notes that Australia still has “good quality” migration policies (its migration score changed only marginally, from 5.41 in 2016 to 5.39 in 2017), but that other countries included in the index have become “more generous and open”, hence the fall in ranking. While the CDI is intended as a quantitative, comparative measure, not a political or advocacy document, I was disappointed by the mild language in the CDI country report of Australia’s performance when it comes to refugees and asylum seekers, suggesting that Australia has “room for improvement… in the number of refugees and asylum seekers it accepts” and “could be more generous” in assessing asylum applications.

This is not a new critique of the CDI. As Robin Davies pointed out last year, the index skews heavily in favour of economic development as opposed to humanitarian aspects of migration. But even if the index methodology takes the position that broader migration policy ultimately has a greater development impact (as Owen Barder argued in response to criticism of Australia’s high 2016 ranking), that shouldn’t preclude the CDI authors from noting in the report Australia’s hardline position on offshore detention and the abuses that have occurred on Manus and Nauru. And perhaps more importantly, though they might currently affect only a small number of people, Australia’s harsh treatment of asylum seekers nevertheless sets a disturbing precedent for other developed countries. Let’s not forget that, since the last CDI was published, Trump labelled Australia’s draconian ‘stop the boats’ policy as “a good idea”, musing “We should do that too. You are worse than I am”. Some European leaders are also looking to Australia for inspiration on asylum seeker policy.

There’s a lot more to be said about the CDI findings for Australia as well as the other 26 countries included in the index. Fortunately CGD makes the data available for public consumption, so I encourage interested readers/fellow development data nerds to delve in and share any other findings worth discussing on this blog.