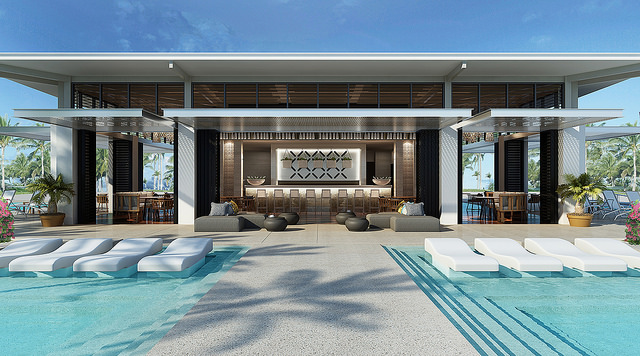 Last year under the auspices of the Northern Australia White Paper, the Abbott Government announced a new migration pathway for Pacific labour mobility: a microstate visa for Kiribati, Tuvalu and Nauru. As Stephen Howes wrote at the time, “The two-year microstate pilot could be much more attractive (than the SWP), but what sectors will it cover?”

Today we know more. The first microstate visas have been issued to i-Kiribati migrants who arrived recently to work on Hayman Island at the One&Only Hayman Great Barrier Resort (pictured above). There are currently 28 i-Kiribati citizens on site. A third group of 14 people will arrive shortly. The occupations identified by the employer include housekeeping, maintenance, stewarding, and food and beverage positions.

The creation and activation of the microstate visa category is a signal of the growing importance of labour mobility to the Australian Government’s development strategy. The Minister for International Development, the Hon. Senator Concetta Fierravanti-Wells, said recently in an interview with the ABC’s Pacific Beat program, “Whether it’s under this pilot, or whether it’s under the Seasonal Worker Programme, basically our objective is to increase labour market opportunities for Pacific workers because of course the remittances that do go back to those countries are vitally important, not just to those families, but to their communities.”

In total, the pilot will provide the opportunity for 250 citizens over five years to access a two year work visa, with the option of applying for a third year. According information provided to Devpolicy by the Department of Foreign Affairs and Trade (DFAT), the work opportunities must be non-seasonal, low-skilled and based in Northern Australia. Overall the process to hire a migrant using the microstate visa, including labour market testing, mostly reflects existing regulations in the Seasonal Worker Program.

Kiribati is the first country to sign a Memorandum of Understanding with Australia. An agreement with Tuvalu is currently awaiting signature while negotiations are ongoing with Nauru. Conflicting migration pressures stemming from asylum policy and labour policy may make the agreement with Nauru more difficult to finalise.

The priority to identify graduates from the Australia-Pacific Technical College (APTC) as potential migrants under the microstate visa is a significant policy win for generating more Pacific labour mobility. A foundation goal of the APTC was to generate opportunities for labour mobility but this hasn’t occurred in any meaningful sense to date. By 2015-16 [pdf], eight years after the commencement of the APTC, a total of 180 graduates have migrated, with 60 per cent heading to Australia and New Zealand. The migration-rate of APTC graduates is about two per cent as the total number of graduates is 9349.

In Kiribati, only 11 of a total of 326 APTC graduates have migrated. Migration from Kiribati is more difficult than other Pacific countries given geographic isolation and the lack of a strong diaspora. The microstate visa provides a more structured pathway, matching up aid policy designed to build human capital in developing countries with a migration opportunity to Australia. This smooths the transition into the Australian labour market as migrants already hold qualifications and provides employers with a level of certainty. Work in Australia will not only generate remittance income, this will be valuable experience on returning to Kiribati or elsewhere.

At this early stage, the major risk for the microstate visa appears to be the small number of visas available over a prolonged five year pilot period. As there is no open application process for potential employers, DFAT is instead approaching third parties to help identify employers. This is understandable but will limit interest in the program, as occurred in the Seasonal Worker Program. Many potential employers will simply be unaware of the opportunity and, if the pilot is transformed into a permanent fixture, this could spell trouble with future demand.

Once identified, the process for an employer to participate in the program isn’t simple. To reduce creating another sponsorship process, the Seasonal Worker Program’s approved employer framework is being used for the microstate visa. This process has attracted some criticism in the past due to being overly burdensome.

Despite this, there are now two employers currently eligible for the microstate visa while an additional three are in preliminary discussions, including a couple of aged care employers. This would be a beneficial addition to the pilot process because of the expected strong future labour demand in the aged care industry. As documented in the Pacific Possible Labour Mobility report, aged care represents a unique opportunity for fostering additional Pacific labour mobility.

Overall, the establishment of the microstate visa and the arrival of the first group of participating migrants is a small step but a positive outcome for Pacific labour mobility from countries who otherwise have difficulty promoting migration.

Henry Sherrell is a Research Officer at the Development Policy Centre. This is the first post in a two-part series exploring Australia’s new microstate visa; read part two here.