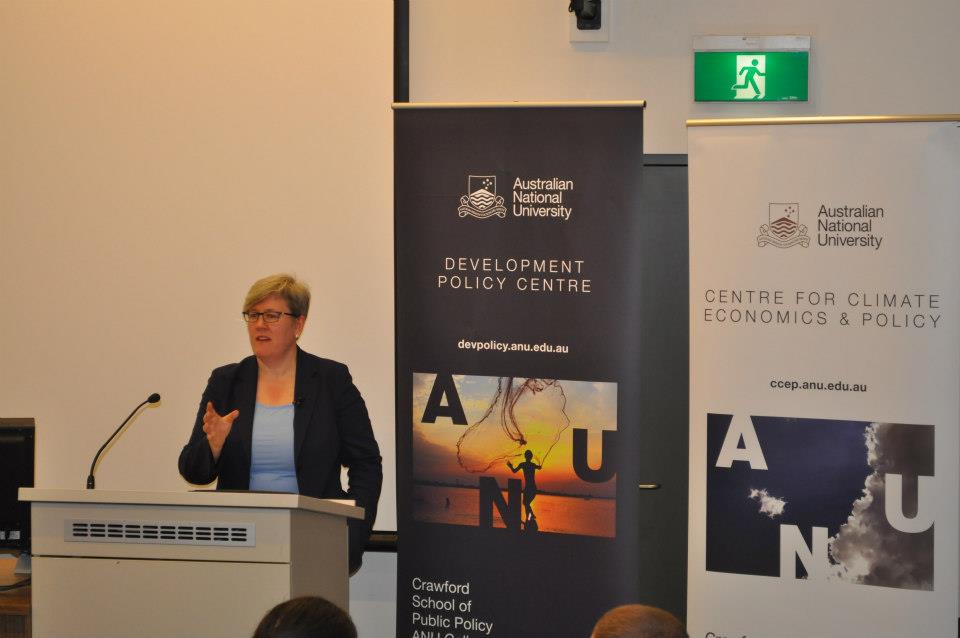 A four degree rise in the world’s temperature can be prevented, but it requires governments around the world to focus on greener, more inclusive growth, said a World Bank climate change expert at a Development Policy Centre event.

“Climate change threatens to roll back decades of development and it will be the poor in every country who will suffer most,” said Rachel Kyte, the World Bank’s Vice President for Sustainable Development, at ANU’s Crawford School on March 21 (podcast available here, video of lecture available here shortly, interview with Rachel Kyte available here).

Paraphrasing World Bank President Jim Kim, Kyte said that there was one question that should be at the top of everyone’s agenda when it came to addressing climate change – “what did you do when you knew?”.

In her presentation, she referred to the findings of a World Bank report released in late 2012, titled Turn Down the Heat: Why a Four Degree Warmer World Must Be Avoided [pdf]. The report, which presents science alongside policy recommendations, was commissioned to help the Bank answer questions from client countries on climate change adaptation and mitigation.

“Scientists agree that even countries’ current UNFCCC emission reduction pledges would likely result in three to four degrees Celsius warming by 2100… But those pledges have not been met,” Kyte said.

“The longer they remain unmet, the more likely it is that we will end up at four degrees.”

Kyte spoke about the implications of this temperature rise for Australia and its neighbours in the Asia-Pacific, including water shortages, stronger tropical storm surges, sea level rises, extreme droughts, food insecurity, migration and potential conflicts.

While the findings of the report paint ‘a picture of a world we really don’t want to be living in’, there was scope for optimism through an inclusive green growth approach, Kyte said.

“It is possible to maximise efficiency and avoid decisions that lock in harmful and high carbon growth options, while at the same time helping reduce vulnerability to climate change for future generations.”

She also spoke on the push to remove institutional silos between fields such as forestry, watershed management and agriculture to take an integrated landscape approach to simultaneously tackle climate change, water scarcity and food insecurity.

Private sector engagement and business buy-in was cited as a critical component of developing a green growth trajectory.

On the World Bank’s role, Kyte described the dual challenge the Bank faces as an institution working with developing countries that are not the main emitters of greenhouse gases, while trying to convince developed nations of the knock-on effect of their emissions and the need for action.

“Forty years ago, the World Bank was a big part of the financial flow from north to south, but now we are a teeny part of the picture. Everything we do has to be about leveraging our resources to encourage others to act, including using our knowledge,” she said.

Kyte pointed to the Pacific Catastrophe Risk Assessment and Financing Initiative as one example of the World Bank’s engagement in the region on this issue, as well as work with the government of Samoa to make a coastal road climate resistant.

In conclusion, Kyte highlighted two key areas where she feels “more work needs to be done”. The first of these was communications — how to effectively communicate the threat of climate change to a wide range of audiences. The second was the question of how to create a political authorising environment to support the reforms and changes needed to enable green growth.