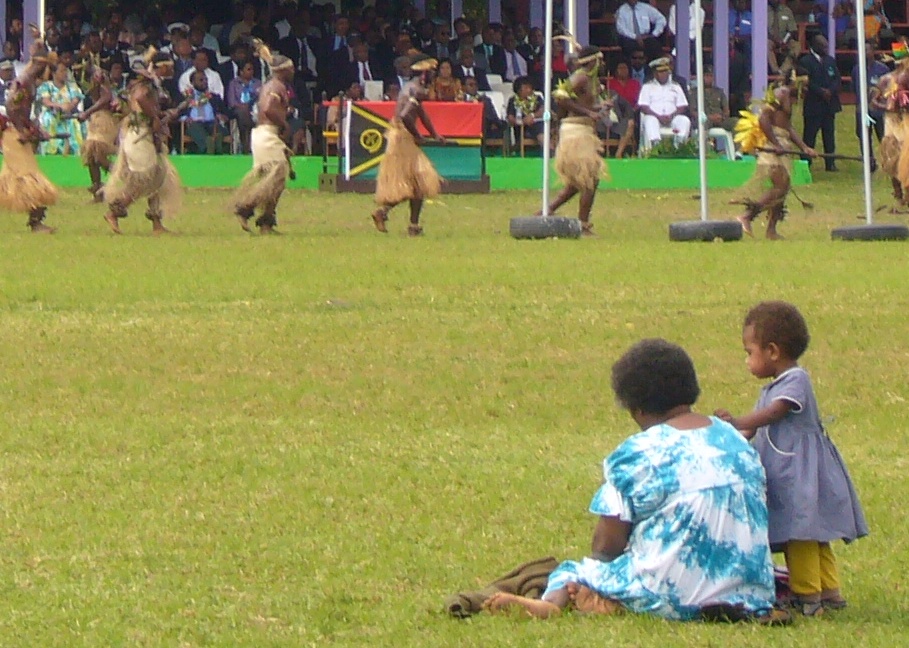 In Vanuatu, women mostly watch the political game from the sidelines

The way politics is played in Melanesian countries has very little national inclusivity about it – in terms of participation by and representation of both men and women at the national level. The role of women is, almost exclusively, to vote, not to actively play the game itself. To use soccer as an analogy: women can be coaches, spectators and fans. But if a woman wants to go into the field and play, this is no game for her.

The foundation of this game is the political party system. In Vanuatu,  some might be interested in pursuing a platform based on principles, policies and development, but in reality the game played on the ground is about locking in numbers of votes first, usually through incentives, in order to be considered by the party. It is an expensive exercise better played by ‘businessmen’ types – because in communities, your legitimacy is based on your ability to show up and provide material ‘stuff’.

So often, it is businessmen who can afford to play in this way. If one doesn’t have the financial resources, deals need to be struck in order to secure funding for their campaign. And because men occupy that business negotiation space, they are the ones who make and dictate the rules. This continuous, demanding and time-consuming game defines the political party system.

Over the past 50 years, from colonial rule to a post-colonial Pacific, men – and even women who have ventured into the field – have been designing, playing and perfecting the art of male-dominated politics in Vanuatu. They have made this seem like the only way in. Coupled with the ‘big man’ status men enjoy, this hinders women from participating.

I am the Director of the multi-country Balance of Power program. Underpinning this initiative is the understanding that it is our Pacific societies’ structures and accepted social norms and practices that influence how people perceive and give legitimacy to the roles of men and women in the political sphere.

Balance of Power recognises that to change these norms takes time, and contextually sensitive, savvy, locally led, non-confrontational approaches. We use a multi-pronged way of working, aiming to influence power-holders and not the ‘usual (gender equality) suspects’, to bring about a change in perceptions and increase buy-in to women’s leadership legitimacy.

Vanuatu is celebrating only its 42nd year of independence this year. In the first two decades after independence, Vanuatu was focused on building itself as a nation. It was determined to be self-reliant and able to function without its colonial masters. Given its size and limited natural resources, it drew from the example of small Asian states, and brought in policies emphasising the need to upskill its human resource capacity to address the many areas of expertise required to develop and grow the nation.

When I was in high school in the 1990s, the focus was to pursue a career as a doctor or a lawyer or a pilot. The focus was not on grooming politicians or a future generation of qualified legislators. This shifted in the late 2000s, when we saw more people pursuing higher degrees in public policy and administration. But that critical gap in the first couple of decades after independence meant that the people who pursued a career in politics were those who had been at the forefront of the independence movement. They were mostly drawn from the rural areas, and almost all men. This is the generation that solidified the kind of politics that formed the foundation of the men’s game, for men, by men. This is the platform that the businessmen in today’s Vanuatu are able to enjoy.

In July, Port Vila went to the polls to elect its city council. It is the last election cycle for the municipality in which there will be reserved seats for women. Of the 17 seats, five of the successful candidates are women, one from each of the five wards, elected into the one reserved seat in each. This election, we have seen the youngest woman to ever get in – a 23-year-old who won her reserved seat with only 71 votes out of the total 1,286 votes cast for three seats in that ward, and who would have been surpassed by four men who scored higher numbers had it not been for that reserved seat.

Temporary special measures (TSMs) in Vanuatu continue to serve one purpose, and that is to allow women into the political space. This is not, however, translating into an increasing number of women being voted in on open seats. Most of the reserved seats get below 150 votes, and the total number of votes for winning women candidates – all on reserved seats – was only 5.2% of the total votes cast in the recent elections.

I was previously convinced that the only way out of the current situation was the allocation of TSMs. Witnessing how this has played out in the recent municipal elections has tempered this conviction somewhat, but only in the sense that we need to rethink what form TSMs take and simultaneously tackle other aspects of the ‘game’. This includes approaches that address the deeply entrenched norms around women’s leadership legitimacy, the ‘backscratching boys’ club’ that favours male candidates, and the very conceptualisation of leadership itself by the voters.

Surely, there has to be another way this game can be played that will still win votes without having to wheel and deal and transact large amounts of money.

How do we make political leadership palatable for a younger generation that doesn’t need the handouts? For the young urban professionals who rely on social media to make connections, form opinions and stay in touch with what matters in their communities?

How do we change the messaging so that women, who are not inclined to sit late into the night making deals with men about what they can give and take, will contest?

How do we change community and voter mentalities from expecting material benefits to a new culture of demanding more accountability and better services from elected members? How do we shift demand from a transactional short-termist view of leadership to a desire for truly transformative governance?

Despite the challenges and the complexity of these questions, I for one am willing to continue to grapple with them.

This blog is based on a presentation to the workshop Gender & Cultural Diversity in Politics: Australia, Asia and the Pacific, held at ANU on 13–15 July 2022.