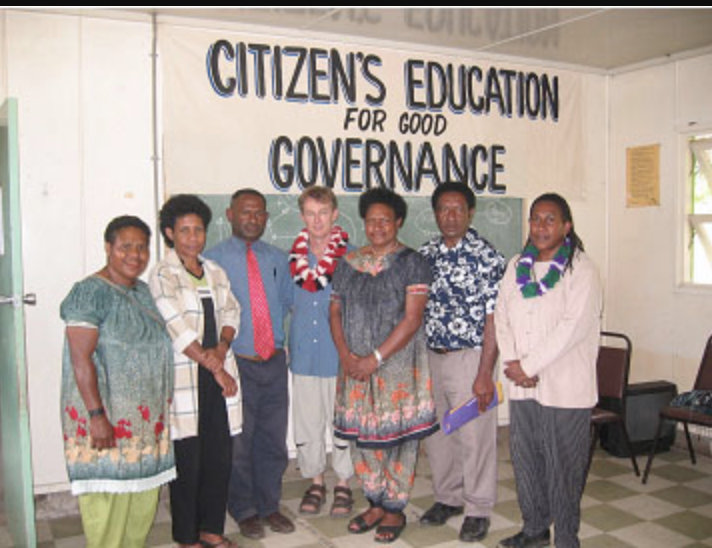 Becoming a grassroots activist in PNG: leading from behind

In July 2019 I presented a seminar, ‘Ripples of Change in Grassroots Women Organising in PNG: A Personal Perspective’, based on my journey as a grassroots women’s leader and practitioner in human rights, gender relations and community development. When I reflect on my years of work in the Highlands of PNG and my studies, I have learned one or two things about women’s leadership. In this post, I discuss some of my early grassroots activities and education, which not only helped me become who I am today as an active citizen, but also helped many women to become strong leaders, and activists.

My formation as a grassroots women’s leader

I have always been a fighter for my rights. Even when I was little, I stood up for my sisters and confronted the bullies at school. I already had that spirit. If there is anything that blocks, belittles or discriminates, I confront it. I also felt obligations to my village. Growing up, I was surrounded by men who treated me with respect. I was raised in a non-violent home where my biological parents practised gender equity towards their eight children, five boys and three girls. I then was adopted by my uncle, who was married to my mother’s sister.

My adopted family showered me in special privileges because my adopted father was a powerful man and he gave me high status for a girl. He did not have any children of his own. He gave me a cultural and traditional upbringing in a village life. My biological father gave me educational opportunities and brought me up in a town life. I had the best of both worlds.

In 1995, I went to Beijing with the Beneath Paradise Pacific Women’s Documentation Project. The project funded 23 women’s organisations from eight Pacific countries to gather documentation about women’s lives in the Pacific. We documented women’s stories through photographs, articles, testimonials and poetry. The project broadened my understanding about human rights and connected me with other women and their ideas. We lifted each other up ­– it was empowering. My story of change started here, as a result of this process and this project.

My awareness and understanding of social justice were further enhanced in 2000, when international friends and supporters obtained sponsorship for me to attend a community-based development studies course at the Coady International Institute at St Francis Xavier University in Antigonish, Nova Scotia, Canada. The co-founder of this centre, the Reverend Dr Moses Coady, initiated the cooperative movement and spread his belief that the situation of the people is due mainly to their ‘own default’. In 1939 he wrote: ‘If the people do not take the means to advance themselves, they will slip surely backward.’ The focus of the school is to build leadership with the idea that ‘capable people, the right ideas and effective organisations are the key engines for improving the world’.

With the underpinnings of the Antigonish Movement’s Adult Education Model taught at Coady, I began to understand participatory community development approaches and developed my spirit of activism. I was determined to be a change agent when I got back to my country. Some of my activities since my return from study in 2000 have been:

Since 2017 I have attended what is known as the Community Leader Court – an informal court in a village setting where conflicts (such as sorcery-related violence and violence against women) are discussed and resolved, or referred to the village courts. My interest in this area is to ensure I provide my comments on questions of human rights and the pathways for redress.

One thing I am particularly proud of is an educational tool that we used in MIKS for creating awareness and critical questions about leadership and good governance. This educational tool was a banner with pictures depicting the people of PNG as a confused nation needing to re-examine its culture, education and nationalism. We needed to change the default culture; what kind of life do we wish to create for our communities? The process of empowerment requires creating ‘consciousness awakening’. Our banner and discussions help people to awaken to the misery around them.

Standing for elections: carving out spaces for women in government

The imbalances I saw in my society provoked me to stand for the parliament in 2002, and in a way that was a ‘PhD’ in political science. I learned about the incidence of corruption, the rigging of electoral rolls, intimidation of voters, and bribery of officials. In 2002, 65 of 66 women candidates in PNG lost the election.

After the elections, I got together with two other female candidates (Anna Golang who stood for Aglimp South Wahgi in Jiwaka Province, and Diana Ulka Uran who stood for Kundiawa Gembogl electorate, Simbu Province), and we asked each other what could we do to promote the participation of women in government. That was when we founded the Highlands-based women’s non-government organisation MIKS.

I see changes through ‘leading from behind’

Sometimes community movements start from simple processes, but connections and networks make them strong. My community entry point has always been through meri bung tok – a women’s gathering or meeting. The purpose is to provide space for women to talk about issues affecting them or to raise community concerns, and to understand who is doing what in their village so that they can draw support and work together as women. For me, as a grassroots development worker, women organising is important to promote women’s engagement and participation and to support lasting solutions to the concerns of women or the community.

One time, we had a big meeting where all the men came, three ward councillors, two businessmen, church leaders, and the village court representatives. I said to the women, ‘This is your chance to get the support of the people’. I told the women leaders not to look at me or quote me. ‘I’m in the background’, I said. ‘I’ll take photos for you.’ But one of the men said:

‘This gathering is an eye-opener for us men. I want to recognise Sarah. She walks around the marketplace, or goes into town dressed like a normal village woman. She is an educated woman but acts like ordinary woman. I want to thank you for getting all these women together and helping us to understand how to help ourselves. Don’t think that we don’t know what you are doing.’

This is an edited version of In Brief 2019/22, originally published by ANU’s Department of Pacific Affairs as part of their In Brief series.

Sarah Garap
Sarah Garap is a community development facilitator and human rights and social justice advocate currently based in Jiwaka Province in the PNG Highlands.