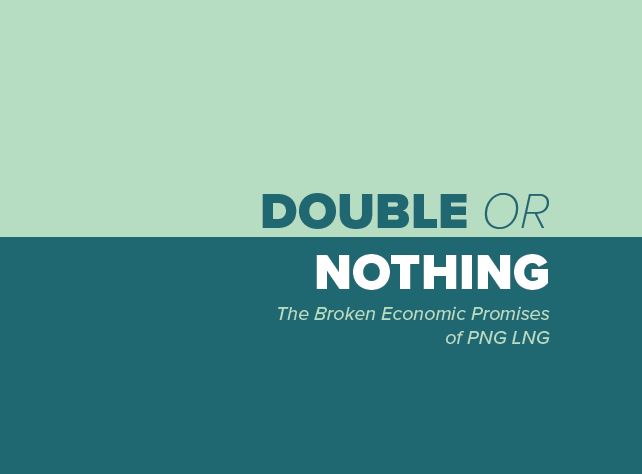 Benefit shortfalls of the PNG LNG Project: a response to Mark McGillivray

The PNG LNG project promised a profound and transformative impact on PNG, including a doubling in economic size. Four years after gas exports commenced, how has it gone?

Recent analysis by Jubilee Australia (JA) in the Double or Nothing report and PNG Economics (see here and here and here) indicates that there is a huge chasm between the early promises of the PNG LNG project and what has happened. This is not due to oil prices falling – gas export revenues are almost exactly as expected with falls in oil prices offset by higher export volumes.

The construction phase from 2010 to 2014 lifted the non-resource parts of the economy by around 8% above trend growth (more on this term later) – so about K3 billion extra in 2013. This was slightly higher than the 5% above trend growth initially expected.

Unfortunately, from about 2012, there were many poor policy decisions closely related to the PNG LNG project. These are examined is some detail in sections 5.3 to 5.6 of the Double or Nothing report – a public policy example of how technocratic advice can be overruled by entrenched resource interests and politics. Gambling on huge revenue inflows, the new O’Neill Government increased the PNG budget by over 50% in 2012 and 2013. As revenues did not flow, PNG suffered its worst budget deficits and a blow-out in government debt. Some extra expenditure was poorly spent on grandiose projects and building political support. Debt interest costs increased from K480m in 2013 to over K1,600m in 2017 – a major on-going budgetary drain. After a major appreciation of the Kina during the construction phase, the central bank intervened to stop it falling back to new market levels. This intervention has led to years of foreign exchange shortages which are seriously damaging businesses in PNG. The adverse impacts on the agriculture and manufacturing sectors were poorly handled and the government is moving back towards protectionist policies. The government also made poor investment decisions, including losing at least K750m from share trading in resource companies.

Economic indicators since the start of gas production have been bad for PNG. GDP did not double as predicted by the muddled modelling of an ACIL-Tasman report commissioned by ExxonMobil. The GDP gain was possibly 10% in 2016 (probably less, as PNG Treasury’s 2016 GDP estimates are probably too high). However, the poor economic policies induced by the project mean that even these GDP gains are being eliminated as the non-resource parts of the economy suffer. By 2016, non-resource GDP with the PNG LNG project was actually less than non-resource GDP without the PNG LNG project, assuming an underlying growth trend of the economy of 5%. By 2020, the same occurs for total GDP with poor economic policies swamping the K10 billion initial boost to production from LNG.

A key challenge for any analysis of the impacts of any major change in an economy is how the economy would have gone without the change. The importance of this key assumption was acknowledged as the most difficult issue in the JA report (first question in appendix 2). The JA report used an “underlying growth path” based on trend analysis of how the economy was performing prior to the analysis. This is a very common approach – whenever you see projections in Australian budget papers, this is simply the number from trend analysis. A sensitivity analysis was undertaken on the impact of using an assumed 5% underlying growth path, with key results included on page 17 of the report. Any reasonable assumptions re-enforced the message that the promises of the project were massively over-stated.

In this context, it was surprising that the recent blog by Mark McGillivray claimed that the JA report “is remarkably silent on the importance of this key assumption to its findings, with no real attempt to credibly justify or evaluate it.” This is just factually wrong and my comments on his blog set out the reasons why that is the case.

As supported by PNG’s Treasurer Charles Abel’s more balanced response to the report, there is general acknowledgement that the project has failed to deliver the level of expected benefits. The subsequent JA report On Shaky Ground also highlights the failure to deliver expected benefits at the local level. An excellent article by The Monthly explores the potential social and political risks that flow from these dashed expectations.

The resource sector in PNG is very powerful. It does some good things – such as support for employment, provision of basic services around project sites, and tax revenues. However, there is a general overestimate of its importance to the PNG economy. From 1980, the resource sector has accounted for only 1% of employment, 16% of total GDP, and 13% of total revenue. This is significant, but not overwhelming. However, there are significant adverse indirect impacts from the sector that are swamping the small-scale and local benefits from such projects – some would say the “tail is wagging the dog”.

The true significance of the JA report Double or Nothing is that hopefully it strengthens the hand of the PNG government in its future negotiations with resource companies in getting greater benefits for PNG’s people. Hopefully, it may encourage a re-examination of specific “resource curse” policies adopted since 2012. Most fundamentally, hopefully it will stimulate a broader discussion on whether PNG should move away from an excessive focus on the resource sector and towards a more inclusive development agenda, one focused on areas of PNG’s true comparative advantage related to its cultural diversity, biodiversity, the richness of its soils and the potential of its people.