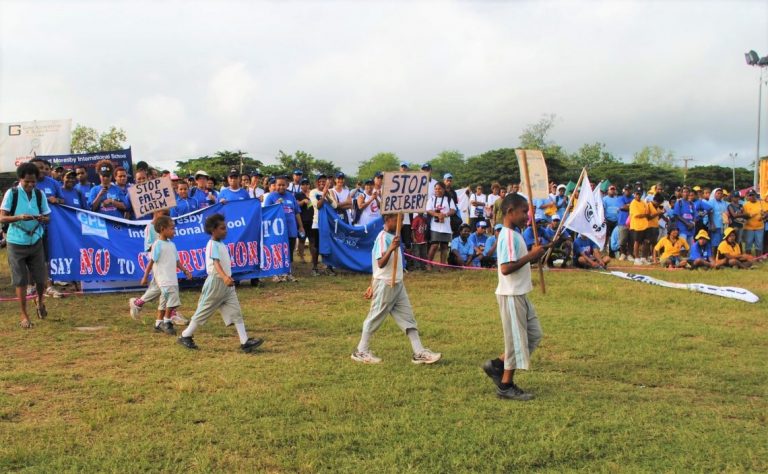 Boom and bust? Political will and anti-corruption in Papua New Guinea

When it comes to fighting corruption in PNG, it seems the more things change the more they stay the same.

In 2019, when James Marape took over as the nation’s leader from Peter O’Neill (prime minister from 2011 to 2019), the new prime minister promised to prioritise the fight against corruption. Marape pledged to establish an Independent Commission Against Corruption (ICAC, yet to pass into law), whistle-blower protection (bill passed in February 2020) and a commission of inquiry into the UBS loan scandal (which began earlier this year). Stressing his commitment, soon after becoming prime minister, Marape said [paywalled]:

Our people have had enough and now is the time to tackle the cancer of corruption that has taken hold using the power of prosecution and all other means that we have at our disposal.

If these sentiments sound familiar to those who follow PNG politics, it is because they are. In 2011, after taking over from then Prime Minister Michael Somare, Peter O’Neill also promised to tackle corruption head-on. Like Marape he pledged to establish an ICAC. In the interim he established Investigation Taskforce Sweep, an anti-corruption agency that successfully investigated government corruption until 2014, when it lost its funding after unsuccessfully supporting efforts to arrest O’Neill himself. Despite early optimism around O’Neill’s anti-corruption reform agenda, his government was plagued by corruption allegations, which culminated in his recent arrest related to allegedly purchasing generators without parliamentary approval.

Allocations also improved in the Marape government’s first budget, although not as significantly: the proportion of funds allocated to anti-corruption organisations only rose from 0.30% of the total budget in 2019 to 0.33% in 2020. In other words, in relation to other areas of government spending, O’Neill’s government was more committed to anti-corruption organisations in its first budget than Marape’s.

Figure 1: Anti-corruption allocations and spending as proportion of national budget 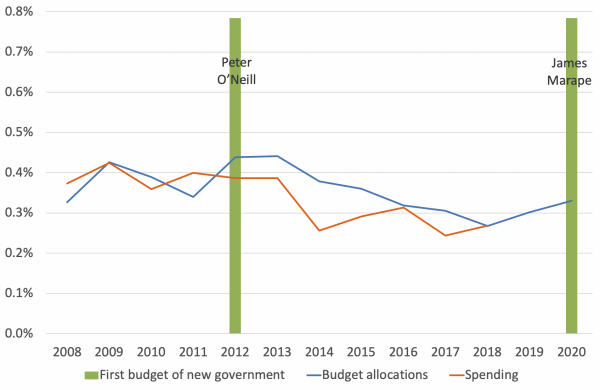 It is too early to tell what will happen to anti-corruption funding under the Marape government. However, our findings and those from other countries suggest policymakers need to be ready to respond to the tendency of governments to cut funding to anti-corruption organisations over time.

Addressing the boom and bust nature of anti-corruption funding is particularly important now the PNG government faces significant financial pressure given the downturn in revenue due to the COVID-19 pandemic.

This piece is based on the authors’ article in the Asia & the Pacific Policy Studies journal, “Boom and bust? Political will and anti‐corruption in Papua New Guinea”. All articles in the journal are free to read and download.

Husnia Hushang
Husnia Hushang was a Research Assistant and a Program Officer at the Development Policy Centre. She has a Masters of Public Policy and a Graduate Diploma of Public Administration from the ANU and a Bachelor of Law and Political Science from Kabul University. She also worked for the Ministry of Rural Rehabilitation and Development in Afghanistan.