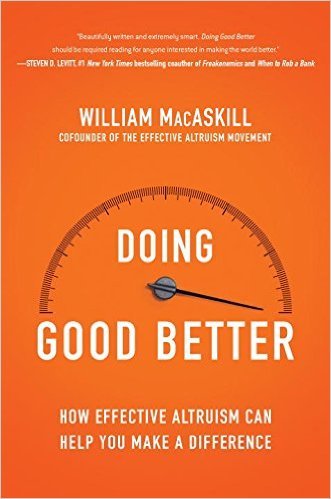 Brother, can you spare an RCT? ‘Doing Good Better’ by William MacAskill

If you’ve ever thought carefully about international development you will be tormented by shoulds. Should the Australian government really give aid rather than focus on domestic poverty? Should I donate more money personally? And if so, what sort of NGO should I give to?

The good news is that William MacAskill is here to help. MacAskill is an associate professor in philosophy at the University of Oxford, and in Doing Good Better he wants to teach you to be an Effective Altruist.

Effective Altruism is an attempt to take a form of consequentialism (a philosophical viewpoint in which an action is deemed right or wrong on the basis of its consequences) and plant it squarely amidst the decisions of our daily lives. MacAskill’s target audience isn’t limited to people involved in international development, but almost everything he says is relevant.

Effective Altruists contend we should devote as much time and as many resources as we reasonably can to help those in greater need. They also want us to avoid actions that cause, or will cause, suffering. Taken together, this means promoting vegetarianism, (probably) taking action on climate change, and–of most interest to readers of this blog–giving a lot of aid. That’s the altruism. As for effectiveness, MacAskill argues that when we give we need to focus on addressing the most acute needs, while carefully choosing what works best.

What’s not to like? Quite a lot it turns out, at least when it comes to aid. (I also have issues with his views on climate change and fair trade, but I’ll stick to aid here.)

But before outlining the issues with MacAskill’s argument, it is worth focusing on what he does well, because at times this book is superb. It’s brilliantly written, which you’ll appreciate if you’ve spent years battling development texts. There are no unnecessary chapters. There is no sedative effect. No shards of jargon. There aren’t even any thickets of equations. Instead, there is lucid prose, sound thinking and powerful examples. He’s at his best in early chapters where, for example, he uses survey data on income and happiness to argue the moral case for prioritising helping poor people in developing countries. There’s a philosophical argument involved, but he makes it adroitly, making his case seem like nothing more than common sense. (Indeed, while philosophy guides MacAskill, it sits gently in the background throughout. If you want an explicit treatment of a view similar to MacAskill’s you could try the chapters on global poverty in recent editions of Peter Singer’s Practical Ethics).

MacAskill also makes two powerful practical points about aid work: not all good deeds deliver benefits, even when well-intended; and, even when they do work, not all good deeds deliver the same amount of good. Following from this, MacAskill argues that we need to gather good evidence on efficacy, and prioritise aid work that delivers the most benefit.

This is absolutely correct in principle. Alas, however, it is hard in practice, and it’s on the practical issue of evidence that MacAskill stumbles. The evidence MacAskill wants is much harder to get than he thinks. This is because he wants Randomised Control Trials (RCTs), and preferably meta-analyses of RCTs. He makes the case for RCTs very well (if you read nothing else, read pages 70-74 where he uses the reality TV show Scared Straight to do this). And RCTs per se aren’t the problem: certain types of aid work lend themselves well to RCTs, and we should undertake RCTs much more often than we do for these types of work. The problem is that much aid work simply cannot be evaluated this way. MacAskill seems to know this. Yet it doesn’t stop him from recommending that aspiring Effective Altruists (and presumably donor governments) focus their aid on a small subset of NGOs that undertake work that has been evaluated favourably through RCTs (usually medical work in Africa), while at the same time sniffing (p. 120) that:

“You won’t find mega-charities like World Vision or Oxfam or UNICEF on…[lists of recommended charities]… These charities run a variety of different programs, and for that reason they are very difficult to evaluate. I also think it’s unlikely that, even if we were able to evaluate them in depth, we would conclude that they are as effective as the charities I list here.”

Really? Let’s take Oxfam Great Britain (I’m purposefully avoiding Australian NGOs, so as not to be seen to be showing favouritism). It is quite true that none of their work on global inequality or climate change could be evaluated with an RCT. And maybe all their work in these areas will be for naught. But I would say there’s a reasonable chance it has, or may some day, be a contributor to huge improvements in human well-being. Likewise, the work that many NGOs devote to advocacy about government aid programmes can’t be evaluated with an RCT. Yet in most countries the aid governments give is much larger than privately funded NGO work, meaning the quality of government aid matters more, and without advocacy groups it would probably be worse. Randomised control trials are great, but in other instances if you want to do good you will simply have to take a leap of faith. This shouldn’t be blind faith, and we should always try to gather evidence, but working out whether or not particular aid endeavours deserve our attention is not nearly as tidy as MacAskill imagines it to be.

The irony of this is that in other parts of the book MacAskill happily lets his standards slip. His endorsement of carbon offsetting comes on the basis of an NGO’s website and some calculations on the back of an envelope. I don’t think MacAskill is wrong in breaking out the envelope in that instance. It’s just a pity that a clear-headed thinker, who focuses a lot of his thought on international development, has failed to think carefully through the challenges of gathering evidence in the difficult world of aid.

Nevertheless, read the book. MacAskill needs to learn more about the realities of aid work. But that won’t stop you from learning from his way of thinking in the meantime.