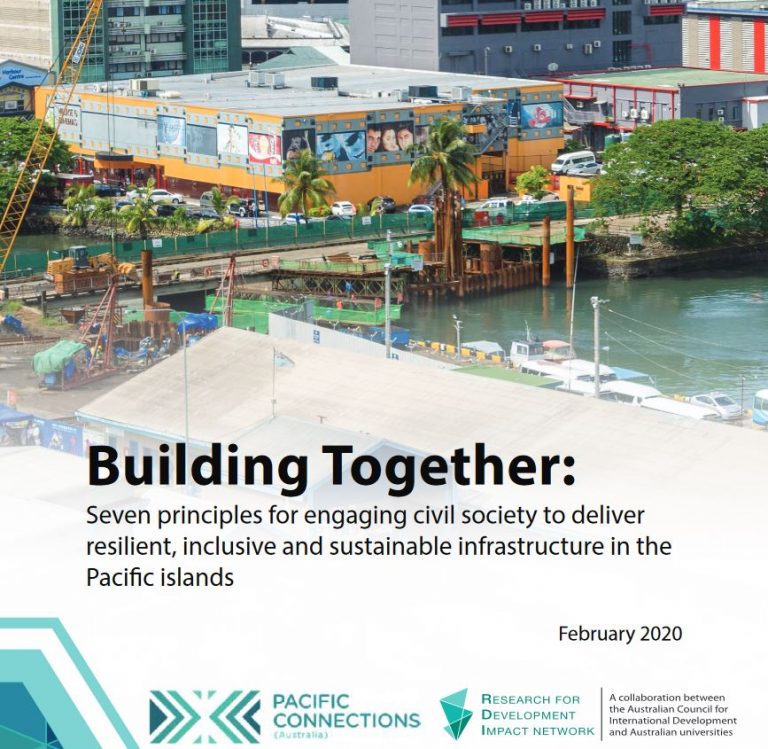 Building quality infrastructure in the Pacific means going beyond a narrow focus on hard assets, to thinking about the ways that new infrastructure, and accompanying services, will contribute to lasting development outcomes. This requires sustained engagement with island governments, and with Pacific civil society and the local private sector, in the design, construction and management of infrastructure. Ultimately, there is no shortcut for quality.

Released last week at the Australasian AID Conference in Canberra the report is based on extensive research and consultations in Australia and the Pacific. It sets out seven key principles for policymakers to follow when designing new infrastructure. It is hoped that by adopting these principles, new infrastructure investments in the Pacific will grow local employment, support skills development, promote gender equality, and create more accessible infrastructure for people with disabilities.

In recent times, major infrastructure initiatives have been announced. The United States, Australia, Japan and New Zealand have, for example, initiated a major investment in rural electrification in Papua New Guinea. The Australian government is financing new telecommunications infrastructure for Papua New Guinea and the Solomon Islands, and has committed to a ten-year $250 million bilateral infrastructure program in the Solomon Islands. Australia, long the region’s largest provider of development finance, has also established a multi-billion-dollar infrastructure bank dedicated specifically to Pacific island countries. The Australian Infrastructure Financing Facility for the Pacific, which uses a mixture of commercial loans and grant financing, represents a significant change in Australia’s aid program to the region.

The Australian government has focused on involving the private sector in delivering new infrastructure in the Pacific. The Minister for International Development and the Pacific, Alex Hawke, has, for example, suggested it is time for Australian businesses to step up in the Pacific. In addition to the private sector, our report suggests there should also be a focus on engaging and supporting civil society groups. Working with Pacific civil society in the design and implementation of new infrastructure is critically important for ensuring transparent decision-making; including in tendering and monitoring infrastructure. New infrastructure projects are also an opportunity to stimulate economic growth in the Pacific directly, through the creation of local employment opportunities, skills transfer and capacity development, and through partnerships with local businesses and civil society groups. Given their closeness to communities, civil society organisations can facilitate the engagement of people with disabilities, and women, in infrastructure planning and delivery, helping to ensure that priorities – and design features – are based on local need, minimise risks to marginalised groups, and benefit these groups in their delivery and beyond.

Typically, it is the actions taken by island governments themselves to manage projects, and to develop robust policy frameworks governing the use and maintenance of infrastructure, that are a key determinant of positive outcomes. This means development partners should be supporting the strengthening of infrastructure governance, the ‘soft infrastructure’ that accompanies construction of hard assets. Often this also requires support for collaborative decision-making that includes Pacific civil society groups at regional, national and project levels. The Pacific Islands Association of Non-Government Organisations (PIANGO) was one of the partners consulted for this report. PIANGO executive director, Emeline Siale Ilolahia, told us it was critically important that new projects be driven by local priorities. “If we’re not careful these projects will be driven by the needs of the people proposing them, and the only beneficiaries will be the companies building them”, said Ms Ilolahia.

“Building Together: seven principles for engaging civil society to deliver resilient, inclusive and sustainable infrastructure in the Pacific islands” was initiated by the Research for Development Impact Network (RDI Network) and co-produced by RDI Network and Pacific Connections (Australia). The report was co-authored by Wesley Morgan, Rebecca McNaught, Sally Baker, Fulori Manoa and Jope Tarai. The full report can be downloaded here.

Wesley Morgan
Dr Wesley Morgan is an adjunct research fellow at the Griffith Asia Institute, Griffith University. Previously, Wesley taught international affairs at the University of the South Pacific. He has written widely in the Pacific islands, with a focus regional geopolitics and Pacific island participation in multilateral trade and climate change negotiations.

Rebecca McNaught
Rebecca and has spent 15 years working across Asia, Pacific, and Middle East regions as a climate and disaster risk management advisor for both the Red Cross Movement and the United Nations Development Programme. Rebecca is currently Partner of Pacific Connections (Australia) and undertaking her PhD on collaborative governance at Griffith University’s Business School.

Fulori Manoa
Fulori Manoa is a Teaching Assistant and scholar at the University of the South Pacific. She is primarily interested in Pacific diplomacy and online/mobile learning in the Pacific island countries.