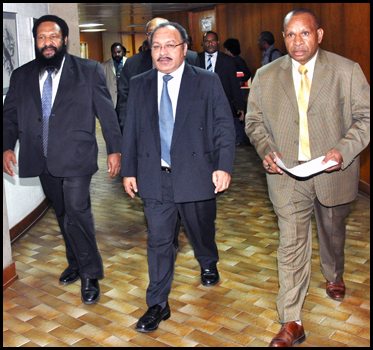 PNG: The Political Coup of a Decade

PNG politics, despite its limited international and Australian coverage (see here and here), has been the stage for the the greatest political coup of a decade, as discussed in this blog. From a position of holding less than one-fifth of parliament, the opposition last tuesday threw out the most stable government in the history of PNG. Even more astounding than this was the ascension to the Prime Minister’s post by MP Peter O’Neill, who previously sat in about sixth position in the line-up for the post. How the events unfolded and what long-term impacts they will have on PNG politics and development policy will be fleshed out in the weeks to come. Ilya Gridneff also blogs that even though PNG has a new PM, the dodgy deals will not go away any time soon. Whether or not the party will be able to unify and govern in time for the general elections in nine months time is also of vital importance. One thing is for sure, it is certainly an important time to keep a close eye on PNG.

Peter Alford, accompanying AusAID Director General Peter Baxter on his recent trip to Indonesia and reporting for The Australian, discusses plans for the streamlining of AusAID’s practices and the removal of red-tape that could threaten to create bottlenecks as Australia moves to double its aid budget by 2015/16. The article quotes Mr. Baxter as saying:

Probably, we’ve been too risk-averse in the way in which we’ve managed the program and overburdened ourselves with layers of bureaucracy and paperwork

For AusAID to publicly recognise its history of risk-aversion at the upper levels is a good reflection of the impact the aid review has had on thinking within AusAID and is certainly a step in the right direction.

Fairtrade and its (unexpected) consequences for the Pacific Island Countries

Uwe Kaufmann, Di Yuan, Altaf Alam and Faqin Lin, on the East Asia Forum, discuss how many local NGOs like Oxfam and PANG are sceptical about free trade agreements and are instead pursuing and promoting non-WTO committing strategies such as Fairtrade. Providing a fair discussion of the pro’s and con’s on both sides, the authors come to the conclusion that a more liberalising free trade agreement, in the form of the PACER Plus trade agreement currently being negotiated between Pacific Island Countries and Australia and New Zealand has the potential to be a far more beneficial development tool than Fairtrade.

The guardian has now begun reporting which countries have donated funds so far to what the UN has estimated to be a US$2.5 billion needed humanitarian response in the Horn of Africa, particularly to tackle famine in Somalia. These figures, which show which countries have donated funds so far – and where the money is going. From the statistics it is clear that huge gaps in financing remain. The figures are updated each week as the crisis continues. A visualization of the affected area and impacted regions is available here. To make a donation, head here or here.

Innovations in the fight against famine

Emi Kolawoli, in The Washington Post, provides a comprehensive round-up of the actions that are being taken by various institutions throughout the world to combat famine and end the ongoing need for crisis response. While the ongoing humanitarian crisis in the Horn of Africa vitally needs ongoing attention and further support, it is also important to the profile of the underlying causes of the crisis, and how it can be prevented from happening again in the future.

The conundrum of achieving ‘value for money’ in fragile states

The IRIN, a global humanitarian news and analysis service of the UN Office for the Coordination of Humanitarian Affairs, provides a good insight into the clash between aid effectiveness, ‘value for money’ and fragile states. This topic requires considerable discussion and analysis in the lead up to the fourth high-level forum on aid effectiveness, to be held in Busan later this year.

Owen Barder discusses on his blog the CGD’s new transparency policy. The key component of this new policy is that from now on, whenever an author posts publications on cgdev.org that involves quantitative analysis, they will also post the data and computer code needed to reproduce their results in full. Through this initiative, any visitor to the web site can check to see if the results match up with the data, allowing for more rigorous academic critique. It will be interesting to see if such a degree of transparency will take hold in other institutions around the world.

The Center for Sustainable Economies at the United States Institute of Peace hosted an eSeminar on August 3-4 to consider economic reconstruction strategies for countries/regions that have been affected by violent conflict.  A panel of experienced scholars and practitioners has evaluated the new research presented in the World Bank’s 2011 World Development Report: Conflict, Security and Development and offered their thoughts on the design, implementation and monitoring of conflict-sensitive initiatives. Resources for the seminar include 6 background essays. Of particular note is Vijaya Ramachandran’s essay on the optimal mix of development assistance to vulnerable regions.

Mothers in Mali battle against Malaria with mobile phones

The International Institute for Communication and Development (IICD) reports on a group of mothers, who work as community health workers in poor neighborhoods in the capital city of Bamako in Mali, who are going to use mobile phones to prevent diagnose and treat malaria in a more efficient way. Mobile phones will be used by the workers to register data from the neighborhood about malaria and instantly sent to hospitals for storage, meaning that information will no longer be lost in the process. This could significantly improve the effectiveness of combatting malaria in the city and it’s success should be closely monitored.