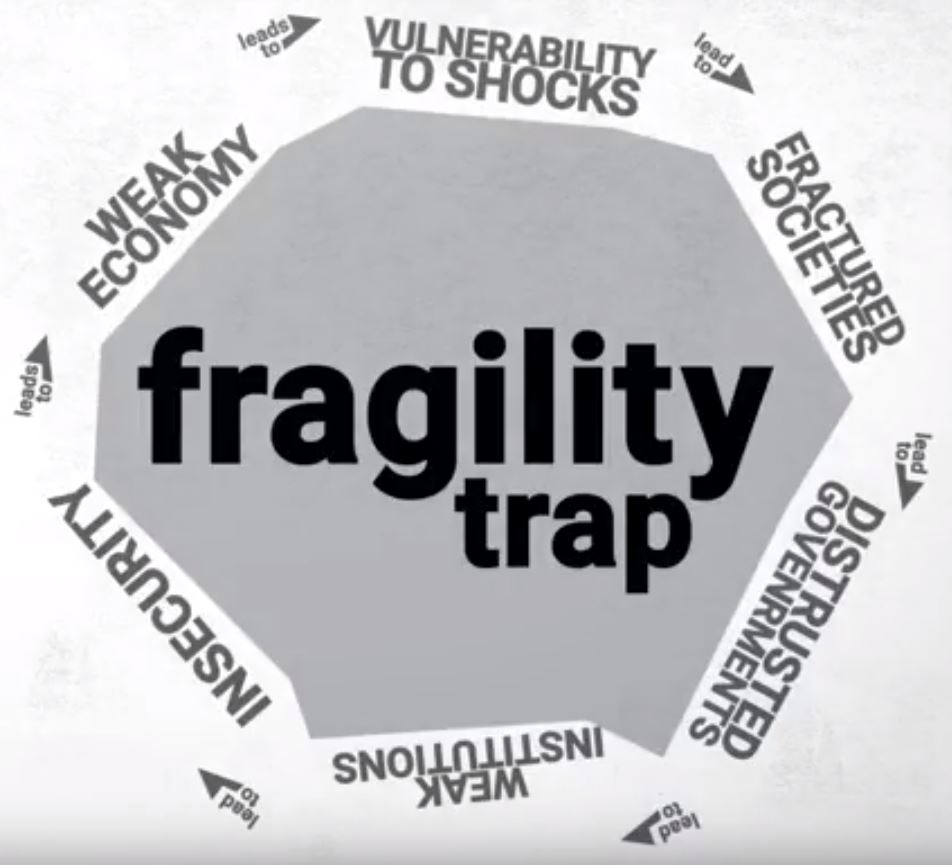 Screenshot from a video advertising the report

Cameron and Collier on fragile states: anything new?

By Saku Akmeemana and Tobias Haque

The Commission on State Fragility, Growth and Development, chaired by David Cameron and including such luminaries as Paul Collier and Donald Kaberuka, released its report a few weeks ago. Overall, we think it’s a helpful contribution that adds the weight of some big names to a growing consensus about what has gone wrong and what could be done better when it comes to helping countries emerge from violent conflict.

The easiest criticism is that the authors don’t live up to their own stated ambition: while claiming to be charting new ground and disparaging much of what has gone before, the report echoes existing work, while not really engaging with — or even acknowledging — some of the most important ideas and publications in the broader academic and practitioner discourses.

We should all welcome the full-throated repudiation of the liberal state-building model of the 2000s in its most simplistic and hubristic forms. From the outset, the authors frame the escape from conflict as a political process driven by the emergence of institutions capable of solving context-specific collective action problems. They frankly acknowledge the limited ability of outsiders to effect institutional outcomes and social change in a deliberate manner. They warn against seeking to resolve fragility through transplanting OECD-style institutions, quickly pursuing multi-party elections, or driving constitutional reform processes. They rightly argue that such institutional measures should follow and consolidate more organic and legitimate power-sharing and accountability arrangements forged by national actors, rather than initiate them.

The report’s emphasis on the importance of critical junctures and the potential use of these moments to signal positive change and project public authority is welcome. The effort to combine a political framework containing insights from psychology (around the importance of a common purpose and shared identity), with a sensible framework for economic development has unusual breadth, at least when compared to the mainstream economic literature. Messages on the need for realism, prioritisation, and a long-term perspective are music to our ears.

Welcome to the fold, Professor Sirs

But how much of this is new? A voluminous literature over the course of more than a decade criticises the externally-driven liberal statebuilding model. A decades-old political economy and comparative politics literature describes historical processes of state formation, covering experiences from Europe to East Asia, and leaves little room for the conceits of institutional implantation. Over the last decade, a virtual consensus has formed in economics and development praxis that political drivers shape development outcomes and that effective institutional and policy reform requires understanding a country’s formal and informal arrangements for the distribution of power and resources. The target in the Commission’s sights is long dead to most of us.

The case for responding quickly to opportunities created by critical junctures and signaling change was made in the 2011 World Development Report, while the role of institutions in resolving collective action problems – explored thoroughly in the political economy literature – was given an accessible policy framing through the 2017 World Development Report. The case for locally-led solutions has been made many times before, most recently in the 2018 UN-World Bank Pathways for Peace report, which focuses on conflict prevention and addressing the drivers of violent conflict, but is inexplicably not referenced. Overall, this feels like a Commission struggling to get on top of the existing literature rather than pushing its limits.

The most obvious manifestation of this is the lack of any coherent treatment of what, to us, is the central puzzle: the specific processes through which institutions that serve a broad public interest emerge from bargains between self-interested political and economic elites, forged around the sharing of power and resources. This is a puzzle that many of us working on conflict countries have thought about in depth, but are often constrained from writing about in official papers and strategies due to inherent political sensitivities.

This blind spot is particularly obvious in two areas. Firstly, the report explicitly presents economic development in fragile states as a technical, governance problem – solutions lie in expanding access to finance, improving infrastructure, and mitigating shocks. There is no recognition that the structure of the economy and the distribution of its benefits is integral to the deeper political processes of elite bargaining and institutionalisation. Nothing is more crucial to peace than the emergence of an economy that provides incentives for co-operation and collective action among those with the power to mobilise violence, but there is no recognition of that here, let alone consideration of the possible implications for economic policy.

Secondly, discussions of security reform take a similarly technocratic tone. In stating that peacekeepers ‘buy the time needed to build the capacity of domestic and regional security services to keep peace’, controlling violence is framed as a question of capacity. But the durable restoration of security and public order is a deeply political problem that involves accommodating powerful actors with the capacity to mobilise organized violence (through formal security sector actors, militias or criminal gangs). These elite actors, and those they mobilise, need to shift their past allegiances and support the new political order. This can only realistically occur if the benefits of a new settlement accrue to these actors and groups in line with their relative power. Realising institutional arrangements that achieve this outcome is a far greater challenge than building capacity.

A political economy of our own

Taking a step back, the report (and perhaps the overall project) seems curiously lacking in awareness of the broader global context. We have another commission providing high-level policy messages as to what international and local actors must do. Yet, analytically informed pronouncements that donors must do things differently aren’t exactly thin on the ground – we’ve had ‘good enough governance’, the ‘new deal’ and g7+, PDIA and ‘doing development differently’.

It might have been interesting for the Commission to consider more seriously the broader factors constraining the capacity of development agencies and international actors more generally to do what, in many cases, we all know we should be doing. Those with experience of international intervention on the ground quickly see that international actors are dealing with a complex political economy of our own – as a collective and inside our various institutions – that fundamentally restricts our ability to adopt some of the behaviors and priorities that the Commission recommends. We would have liked to hear the Commission’s ideas about how greater space could be created for international actors to respond to analysis and evidence rather than sometimes perverse political and institutional imperatives – a capacity that the report both assumes and relies upon in its recommendations.

Finally, the report is, surprisingly, rather naïve about the nature of the international architecture on peace and security. It fails to acknowledge the rapid shift to a multi-polar world where rules-based globalism is in apparent retreat, the tools available for coordinated multilateral action are increasingly constrained by broader geopolitical fractures, and domestic political support for international intervention increasingly depends upon a national interest framing. Indeed, the new prevention agenda is more in tune with the times, in emphasising that countries need to manage their own conflict risks, with the international community playing a supportive role through appropriate development financing, diplomacy (including with regional powers and engaging domestic stakeholders), and selective use of multilateral levers.

Overall, the report provides a useful summary of recent thinking on what has gone wrong and what needs to be done better when it comes to development engagement in fragile and conflict-affected states. It’s good to see economists taking politics seriously, although it seems there is still some catching up with other disciplines to be done — especially with the writings of their political economy brethren.

If having superstars signed up to a growing orthodoxy can help effect change in practice, then this is a welcome report. Even if nothing in it is particularly new.

This blog post represents the views of the authors only, not that of the organisations they work for.

Saku Akmeemana
Saku Akmeemana joined the Australian Department of Foreign Affairs and Trade in 2017 as its Principal Specialist for Governance, and is responsible for shaping the Department’s approach to governance and political economy in its development program, including in fragile and conflict-affected states. She has worked for both the United Nations in peacekeeping, humanitarian and political operations, and for over a decade at the World Bank, where her work focused on the political dynamics of institutional change, political economy and governance in countries affected by fragility, conflict and violence.