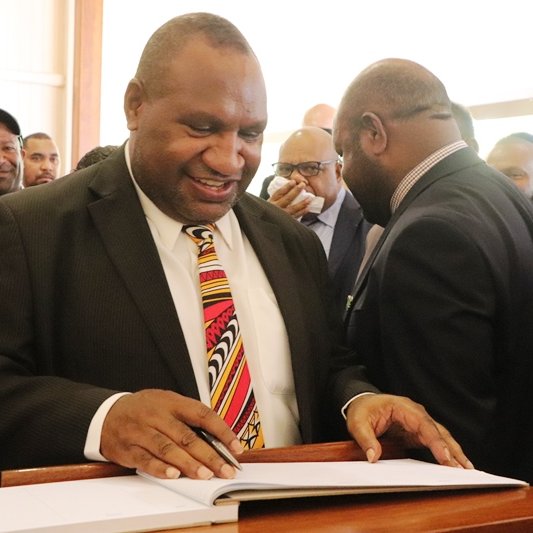 Can PNG become the richest black nation in the world in ten years?

Papua New Guinea (PNG) recently underwent a change in leadership, which saw the incumbent Prime Minister resign prior to a prime ministerial election on the floor of parliament. James Marape was elected PNG’s eighth Prime Minister on 30 May 2019, with an overwhelming majority (101 parliamentary members voted for Mr Marape, with seven voting for the other nominee, Sir Mekere Morauta). That same evening Mr Marape addressed the country on one of its free-to-air television stations, EMTV, and later on social media. Amid thanking the former government and assuring the country it was in safe hands, Mr Marape announced that he aspired to make PNG the “richest black Christian nation on planet earth” within ten years.

To assess the realism of such an aspiration, I put together a list of the top ten richest, black, Christian nations. Christian nations are identified as those where most of the population identify as Christian (of whatever denomination). The richest were those with the highest real GDP in 2011 US dollars (‘real’ means adjusted for inflation) per person, using purchasing power parity (PPP) which adjusts for different costs of living across countries. Real GDP per capita is a good indicator of wealth, as it measures the amount of income available to each person in a country. Black countries are those from sub-Saharan Africa, the Caribbean and the Pacific.

The richest black nation is Bermuda, with a GDP per capita of US$50,669. Bermuda is also predominantly Christian. Four nations that make the top-ten list are African, the remaining six are Caribbean nations. None of the predominantly black Christian nations in the Pacific region were wealthy enough to make the list (the richest being Fiji with a real GDP per capita of US$8,703). 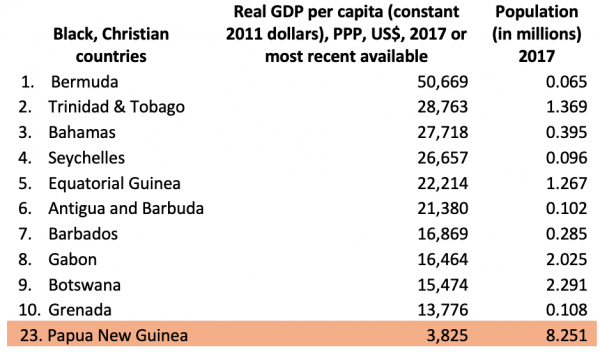 It is of interest that none of the countries that make the top ten are as populous as PNG. However, there are also larger black nations with a much higher GDP per capita than PNG. For example, South Africa, with a population of 57 million, has a GDP per capita of US$12,294 – more than three times PNG’s GDP per capita.

All top-ten nations have a GDP per capita of above US$13,000, making them relatively wealthy, compared to PNG’s GDP per capita of US$3,825. If a simple compound growth rate is applied, for PNG to reach Bermuda’s current GDP per capita within ten years, it would have to sustain growth at 30 per cent yearly.

PNG has never experienced 30 per cent growth in the past; nor has any other country for that matter, at least not for any sustained period of time. PNG has experienced two notable high GDP per capita growth rates in the past (according to World Bank data). In 1993, PNG enjoyed 15.3 per cent growth. However, PNG’s growth rate plummeted to negative 5.8 per cent growth in 1995 during a period of excessive government spending, increased domestic interest payments, and unbudgeted advances on government price support scheme, decreasing public confidence and leading to capital flight and depletion of the Central Bank’s foreign reserves. PNG’s second-highest real GDP per capita growth period was in 2014, when PNG experienced a 13 per cent growth rate resulting from the first shipments of the PNG LNG project. This was also followed by a sharp decrease in 2016 to negative 0.5 per cent growth. This sharp decrease was due to the fall in world oil prices in 2015, which affected government budget revenues and resulted in a reduction in real GDP growth in subsequent years.

Policy changes proposed by the new government centre on increased local content in renegotiated mining and petroleum agreements, coupled with improved mechanisms for corruption detection and prosecution, and better accountability of government ministers. Regardless of the merits of these policies, PNG’s history has shown it has not been able to sustain high growth rates. There are no quick and easy solutions to issues around lack of infrastructure, remoteness, and volatility in resource prices that make economic growth in PNG difficult.

While it is good to aspire to higher income, aiming to become a high-income country within a decade is unrealistic. It may be more realistic to settle for goals such as catching up with Fiji’s per capita GDP of US$8,703, and aiming to be the richest Pacific nation, outside Australia and New Zealand. Even this would require a growth rate of 8.6 per cent for the next ten years (assuming Fiji doesn’t grow at all). Catching up with Fiji alone will require not only very good policies, it will require longer than a decade.