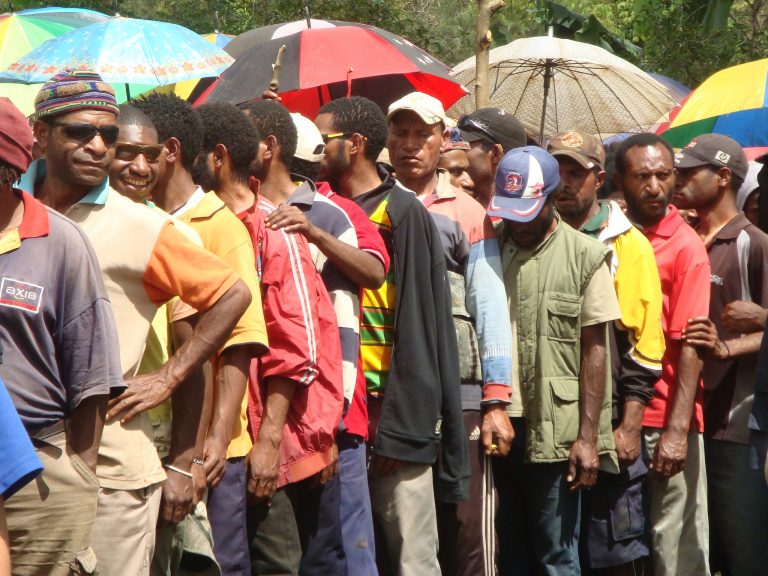 Some challenges for voters in PNG’s 2017 general election

In my earlier post ‘Day of judgment,’ I invited Papua New Guineans to critically evaluate the performance of Prime Minister Peter O’Neill’s government as they head into the polls tomorrow, 24 June 2017. The post briefly pointed to the struggling economy, the weakening state institutions and the challenges to the rule of law in the country as deeply worrisome despite the assurances of progress offered by the government. Prime Minister O’Neill’s government may have administered an admirably ambitious regime, but its controversies stand to overshadow its daring achievements.

This suggestion, however, depends partly on how O’Neill’s government is judged by the voters. The election results will provide some answers to these questions but there are some challenges for voters worth highlighting.

The PNG Electoral Commission confirms that a total of 3,332 candidates are contesting the 111 seats throughout the country. While the total number of candidates nationwide may have decreased, in some individual electorates, especially in the Highlands of Papua New Guinea (PNG), candidate numbers have increased or remain the same. Even though overall candidate numbers have declined compared to the last election, such a high ratio of candidates to population brings to question the necessity of so many candidates.

An often-advanced argument by candidates vying for a position in politics is that everyone has a right to stand for public office. Another commonly held argument is that because the limited preferential voting (LPV) system allows voters three options, there is no issue with having so many candidates vying for public office. The latter argument is contrasted with the previous system of ‘first past the post’ where a voter has only one vote so candidates of tribes in close proximity were forced to stand down in order to maximize the winning margin.

These arguments are valid but also troublesome when studied closely in some contexts of PNG. While the LPV system has allowed greater movement of contestants and voters within the electorates and has created a greater participatory political environment than its predecessor, it appears to encourage bribery. With three options to vote, voters often allocate their ‘first’ vote to their preferred candidate, and hold out the other two options on auction to the ‘highest bidder’. Vote buying has always been a problem in PNG elections, but the LPV system threatens to normalise the practice.

The LPV system has also been used as a pretext by sitting MPs, political parties and other candidates to sponsor or support what some term ‘fake candidates’ within the electorates. These candidates may appear genuine, but may actually be contesting in the same area of a stronger candidate in order to divide the voting population and reduce his or her chance of winning.

The right to hold public office

As introduced earlier, an impetus for the high volume of candidates has been the argument that everyone has a right to stand for public office. While it is a constitutional right, it is also very simplistic, overused and in many respects detrimental to efforts of building a robust political system. The right to stand does not always mean one is capable of being a political leader.

Traditionally in PNG, one’s eligibility as a political candidate was measured by the extent of a person’s material gains such as money, livestock, businesses and the number of wives. However, such characteristics are not necessarily suited to understanding the complexities and demands of modern governance and international and regional trajectories that increasingly influence policymaking. In this environment, it is essential for leaders to have certain level of skills, knowledge and awareness, or the ability to acquire them.

A village leader, while highly respected in his or her village, may not have the experience or ability to relate to and engage with national and international discussions. It may have happened for the pioneers of the country during the post-Independent era where the demands were less complex but it is clearly not the case now.

The failure to appreciate this reality has often resulted in poor choices of political leaders. Consequently, the power of government continues to be in the hands of a few political elite while the rest of the political leaders jump on the bandwagon as long as they have access to their share of the perks to keep their electorates ‘happy’. It has been a cause of the decline in the quality of national debate over the years.

For the 2017 general election to be successful, security remains the top priority and must be absolutely stringent. The police, defense and correctional officers will all be deployed amidst concerns of inadequate funding.

Another concern is the announcement to have only one polling day unlike previous elections. It is not clear what will happen to those who miss out on the day to vote if time runs out, especially in areas of bigger populations and where it is logistically difficult for election staff and voters to arrive on time for the day of polling. It might be a security or cost saving measure, but it certainly risks upsetting the voters, and the frustration in missing out on voting may incite conflict in some areas.

Social media, especially Facebook, continues to be an indispensable asset in this election year. In the last election, the PNG Supreme Court accepted photos and videos of alleged illegal actions at the polls to nullify winning candidates. With increasing access to smartphones and Facebook, we can expect to see more vigilant voters keeping an eye on any illegal actions at the polling sites.

As one user recently commented:

“All the hidden agenda will now surface so there is nothing to hide thanks FB and social media…the people can now be informed…thanks to Mark Zuckerberg and digicel” (ISP).

Prime Minister O’Neill is confident of forming the next government on the assumption that majority of the current MPs and candidates under his People’s National Congress (PNC) party will be successful at the elections. However, PNG has always had a high turnover rate of MPs and this is less likely to change, especially given the widespread allegations of corruption and mismanagement besieging O’Neill’s government. If O’Neill wins his local seat, he maybe able to pull his political strings, but other incoming MPs, especially from coalition parties, may question his credibility as a candidate for Prime Minister.

Apart from the PNC party, they are forty-four political parties heading into this election and all of them are equally optimistic of forming the next government. The revival of two of PNG’s oldest political parties, Pangu Pati and National Party, has also gained traction throughout the country. The ultimate question for voters is not who forms the next government, but who is the most credible person to lead the country in a time of unprecedented economic and political challenges.

Regarding O’Neill’s corruption allegations, it is likely that investigations will resume under a new government unless O’Neill or his compatriots form the next government. But with PNG’s record of resolving serious issues through the lens of ‘forgive and forget’ – an often misinterpreted Christian principle and Melanesian consensus (such as was displayed successfully in the aftermath of the 2011-2012 impasse) – there is a chance that those implicated for any legal or leadership code liability will have their actions excused. One can never be too sure of predicting the future in the ‘land of the unexpected’.

Bal Kama
Bal Kama is a PhD Candidate at ANU College of Law and a Sessional Lecturer at the University of Canberra.