Child mortality declining, but much more work to do

In 2012, approximately 6.6 million children worldwide – 18,000 children per day – died before reaching their fifth birthday. Intolerable—but roughly half the number of under-fives who died in 1990 according to a report released today by UNICEF.

Committing to Child Survival: A Promise Renewed champions a global effort to stop children from dying from easily preventable causes like pneumonia, diarrhoea and measles. It finds that more than 90 million children’s lives have been saved in the past 22 years with the assistance of international aid.

The global average annual rate of reduction in under-five mortality was 1.2 per cent between 1990 and 1995. In the period from 2005 to 2012, it accelerated markedly to 3.9 per cent. However, as the figure below shows, it needs to go further still in order to reach the MDG 4 target of reducing under-five mortality by two-thirds between 1990 and 2015. 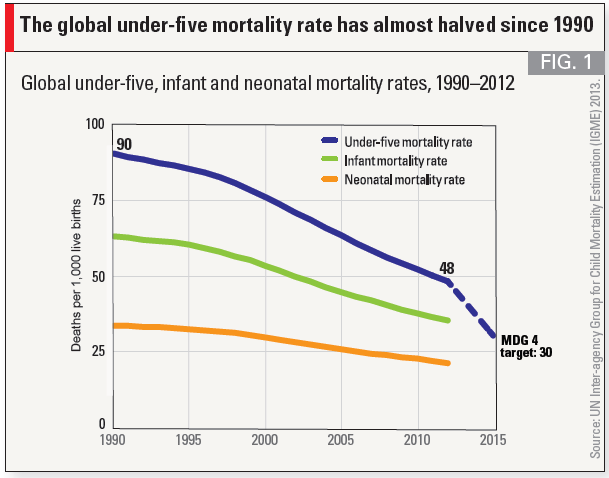 Bangladesh is among the success stories, with under-five mortality falling 72 per cent from 1990 to 2012. Timor-Leste is also among the high achievers, reducing child mortality by 67 per cent between 1990 and 2012.

UNICEF Australia is calling on the newly elected Australian Government to contribute with ‘renewed urgency’ to efforts to reduce preventable child deaths. At the same time, its Chief Executive, Norman Gillespie, has said the Coalition’s aid cuts constitute a threat to further progress.