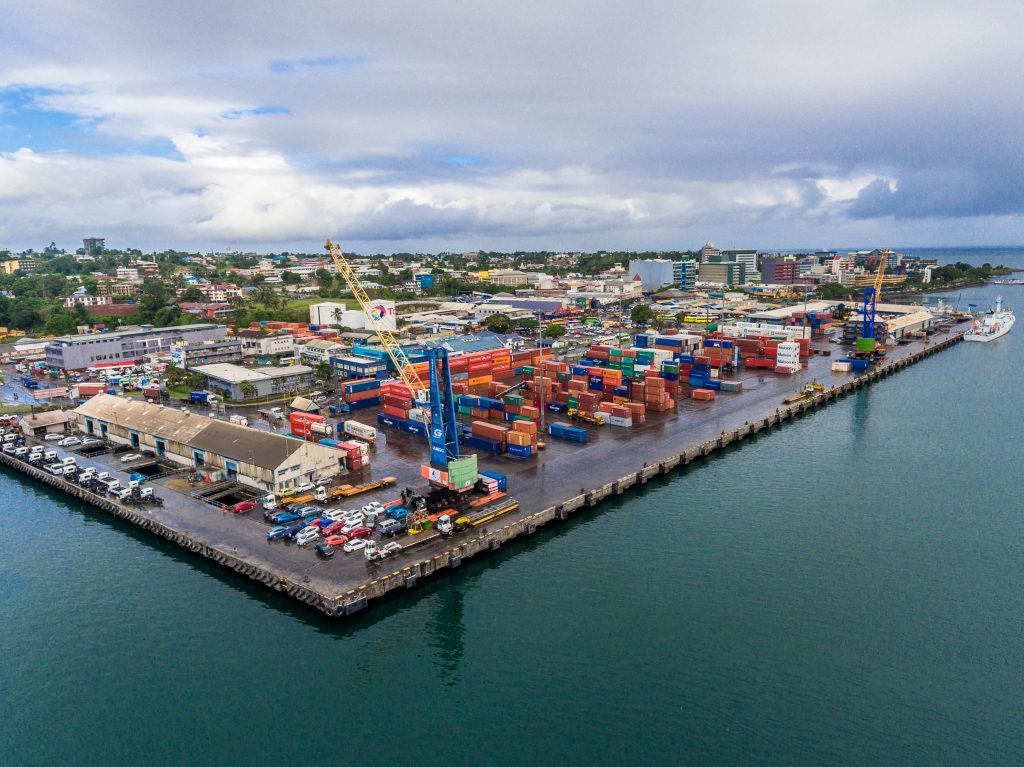 The China shift in Pacific trade

By Matthew Dornan and Sachini Muller

World leaders are gathering in Port Moresby this week for the APEC Leaders’ meeting. On the sidelines, Xi Jinping will be meeting with leaders of Pacific island countries that recognise the one China policy. The meeting will be watched closely in Australia. Xi Jinping is widely expected to make announcements relating to enhanced cooperation with the region, and Chinese lending is sure to be a focus of resulting commentary in Australia. However, it is the changing nature of trade ties with the region that present a more significant challenge to Australian policymakers (even if the two are somewhat related).

The increasing importance of trading ties with China is evident from even a cursory examination of international trade statistics collected by UN Comtrade (see Figure 1). The trajectory of Pacific imports from China is especially striking (note we are excluding PNG here, as it is discussed separately below).

Since 2000, there has been a twelve-fold increase in the value of Chinese exports to the region. Over the same period, imports from Australia have remained stagnant, with their value in 2017 lower than that in 2004. These trends would suggest that Pacific consumers are substituting Chinese goods for Australian goods – probably due to lower prices. More detailed analysis is needed.

The story is similar for Pacific exports, though the numbers involved are much smaller. Pacific exports to China have risen dramatically from a low base of $46m in 2005 to almost $400m in 2017 (all figures are in USD; broad trends remain the same when accounting for currency fluctuations). There has been no such pattern for exports to Australia, which have moved up and down over the period. Exports to Australia were lower in 2017 ($160m) than in 2005 ($210m), though they were higher in 2012 ($340m).

The combined result is that both Pacific exports to China, and imports from China, have overtaken those to/from Australia in the last five years. 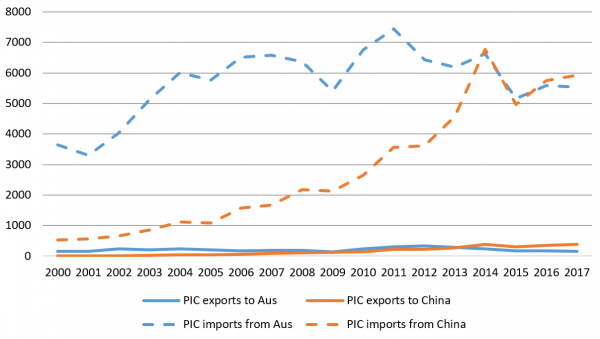 These shifts have not reduced the enormous trade deficits run by most Pacific island countries (again we are excluding PNG). However, it is worth bearing in mind that the data don’t include trade in services such as tourism. Include such services, and we would see a more balanced picture, and a stronger relationship with countries like Australia (though tourism from China is on the rise).

How important is trade with Australia and China for individual Pacific island countries?

Looking at import partners, China is one of the top three partners for five Pacific island countries; and Australia only for three, although it is the top partner for two of these (Solomon Islands and Kiribati) and would likely be so for Nauru if the data allowed us to include it in the table. Singapore is also a major import partner, given the fact that it acts as a transit point for fuel imported by the region. New Zealand is the most significant partner for three of the countries (and would likely be so for Niue and Tokelau, were data for these available).

Source: UN Comtrade data; all data is post-2011, latest available data for each country is used

What about the Pacific’s largest economy, PNG?

In the case of PNG, trade ties with Australia are stronger. Though the trade data are problematic (we must rely on mirrored data given inconsistencies in Comtrade data for PNG), it is clear that Australia remains PNG’s most important trading partner. However, recent trends suggest that this is set to change, especially in the case of PNG exports (see Figure 2). Australian trade with PNG has decreased since 2012, driven by the end of the LNG project’s construction period and falls in global mineral and oil prices. China’s trade with PNG has increased over the same period. In particular, there is strong growth in the value of PNG exports to China in recent years, which are now nearing the value of exports to Australia. 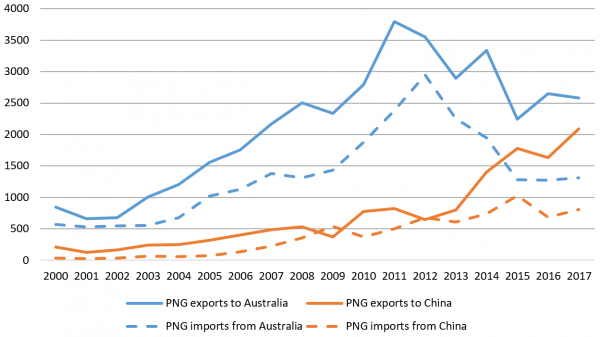 So, what can we conclude?

Whatever Xi Jinping announces on the sidelines of APEC, Australia’s declining dominance as a trading partner for Pacific economies should be part of any conversation on influence. While current media and policy interest has focused primarily on aid and loans, arguably trade will be more important in the long-run, both for Pacific economies and Australia’s relationships in the region.

Note that the text relating to currency fluctuations was re-worded for improved clarity after this piece was published.

For more on China’s engagement with the Pacific, see Rohan Fox and Matthew Dornan’s blog on whether China is engaged in ‘debt-trap diplomacy’.