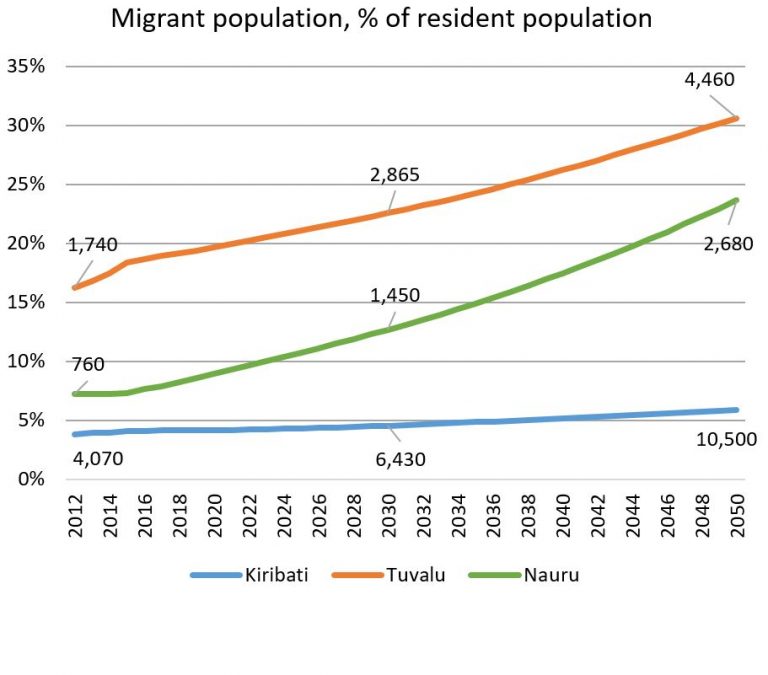 Climate change and migration in Kiribati, Tuvalu and Nauru

By Richard Curtain and Matthew Dornan

The atoll of states of Kiribati and Tuvalu have the unenviable distinction of being among the countries in the world that are most vulnerable to climate change. Both atoll nations are situated just metres above water. Both are already feeling the effects of a changing climate, with recent years seeing king tides affect the urban atolls of South Tarawa and Funafuti, and cyclonic activity causing extensive damage in Tuvalu.

Together with Nauru, these countries also have another unenviable trait: their citizens are afforded few opportunities to migrate overseas to live and work.

Nauru (population approx. 11,000) is the only Pacific island state with a population of fewer than 100,000 people that has no special migration access to a larger country. Kiribati and Tuvalu have very limited access to New Zealand, with 75 places available each year for applicants selected by ballot. This minimal level of migration access sets these countries apart from other similar small nations in the Pacific, whose citizens are able to freely migrate to wealthy larger countries with which they have a special relationship (New Zealand, in the case of Niue and Cook Islands; and the US, in the case of Palau, Marshall Islands and the Federated States of Micronesia).

Kiribati (population 118,000), unlike Tonga (population 108,000), has low levels of emigration and a very small diaspora resident in Australia and New Zealand. The migrant population in Kiribati numbers less than 5,000, or about four per cent of the resident population. In the case of Nauru and Tuvalu, this percentage is about eight and 19 per cent respectively. The diaspora of all three countries, but especially Kiribati and Nauru, is modest when compared to those of other small island states like Tonga (approx. 50 per cent), Samoa (46 per cent), FSM (34 per cent), Marshall Islands (27 per cent) or Palau (31 per cent), Niue (81 per cent), and Cook Islands (63 per cent).

Citizens of these countries have struggled historically to access skilled migration opportunities. An IT worker from, say, Bangalore, can use Australia’s skilled migration pathways in a way that a prospective migrant from Kiribati simply cannot do (there would be few I-Kiribati with the necessary qualifications, and a tiny private sector in Kiribati makes it difficult to gain relevant experience).

The reason this is important for climate change adaptation is that migration opportunities can form an important household strategy for coping with the harmful livelihood effects of environmental changes. Indeed, as the effects of climate change become more burdensome, other adaptation strategies will become less effective, making access to migration opportunities more important.

In a recently released report, we examine migration opportunities and project future migration from Kiribati, Tuvalu and Nauru through to 2050, examining fiscal and economic impacts.

Climate change is not the only factor influencing migration from these three island states, of course. Small island developing states have long faced a number of challenges to their survival.

Growing population density is especially problematic for the atoll states, given the limited amount of arable land that is available and the ongoing reliance on subsistence agriculture and fisheries (less an issue in Nauru). One CSIRO study has suggested that the human carrying capacity of small islands is approximately 100 people per km2 (Foale 2005, Butler et al. 2014b). UN population density estimates show that in 2015, Nauru and Tuvalu had 563 and 367 persons per km2 respectively, while Kiribati (excluding Kiritimati Island) had a population of 251 persons per km2. These figures are increasing in Tuvalu and Kiribati, and rapidly so in the case of Kiribati.

Migration, both internal and overseas, has historically been a key adaptive strategy for some households in these countries (for example, Tuvalu and Kiribati for decades sent large numbers of seafarers overseas to work on container ships). But in today’s bordered world, opportunities for migration overseas are limited for those without the requisite qualifications. The migration opportunities that do exist are least available to those who live in the most vulnerable locations and circumstances.

We argue in our report that for migration to perform its role as an adaptive strategy (one of several), more migration opportunities need to be provided to low-income households. Freely chosen, managed migration of a population is more effective than large-scale, reactive migration in response to a humanitarian crisis.

Present trends are especially concerning in the case of Kiribati, given a growing population and limited availability of arable land. By 2050, the UN projects that Kiribati’s population will have risen to 180,000 (that of Tuvalu and Nauru will be 14,000 and 11,000 respectively). Kiribati’ diaspora resident overseas, when measured as a proportion of the Kiribati population, will barely grow at all. 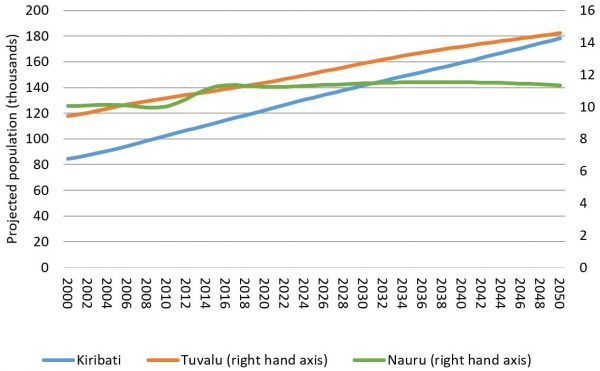 Though formal sector employment and the number of I-Kiribati with a post-school qualification will rise, the increase will not be commensurate with growth of the working age population. As a result, expenditure on health and education will rise relative to domestic government revenue (which is linked to formal employment). This in turn will contribute to a growing fiscal gap (caused by a mismatch between government expenditure and revenue) that must be met through aid funding or reduced services. A similar – though less extreme – picture is also evident in Tuvalu and Nauru (see Figure 2), with developments in the latter strongly influenced by the future of the offshore processing centre. 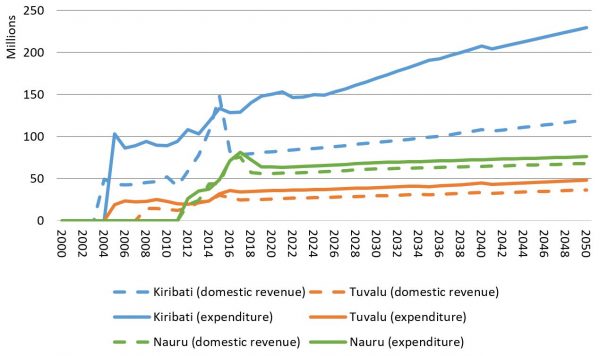 Migration can form an important adaptive strategy for households in over-populated areas, including areas affected by climate change. Yet historically, we know that migration from Kiribati, Nauru and (less so) Tuvalu has been limited. The major constraint? Limited opportunities are available for low-skilled workers to migrate for the medium to long term to Australia and New Zealand.

If we are serious about adaptation in atoll contexts, migration should form part of the discussion. The challenge is to work out ways that managed migration pathways can be fostered for more vulnerable households: pathways that benefit low-skilled workers, and which are accessible to those who want to migrate but lack the resources to do so. Such pathways, combined with a larger diaspora residing overseas, will help those who are prepared to migrate. As well, such migration pathways will benefit those who want to stay through the development of a safety net and more general support for those with family overseas.

In Australia, the establishment of temporary labour mobility schemes and the re-design of the Australia Pacific Training Coalition signal steps in the right direction. But more is needed. Linkages between different schemes should be strengthened and made more explicit. Special permanent migration pathways for these countries to Australia are needed, like the type, albeit on a larger scale, that have existed for years to New Zealand for citizens of Pacific island countries through the Pacific Access Category and Samoan Quota visas.