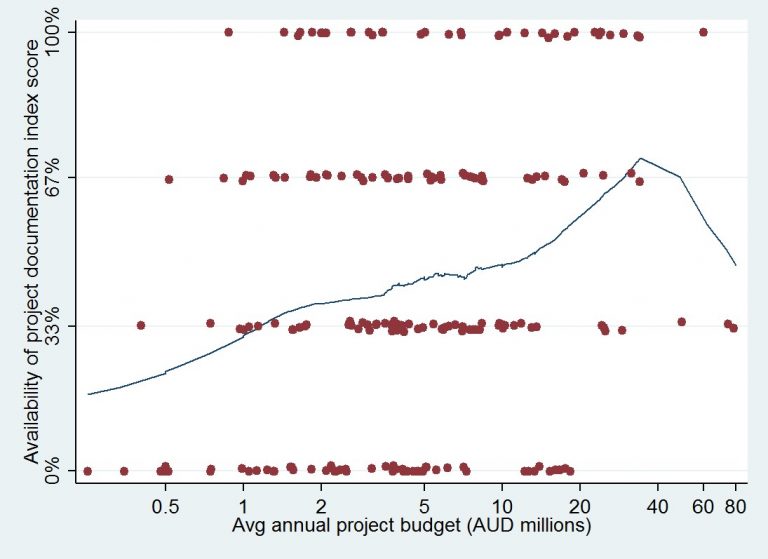 A closer look at the 2016 Australian aid transparency audit

By Camilla Burkot and Virginia DeCourcy

In this post, we go beyond the headline figures to present some of our findings in more detail. As in 2013, there was considerable variation between countries. Whereas the Philippines produced the most impressive result of our sample, with an average document availability exceeding 60%, Nauru didn’t even reach 10% (Figure 1). Three projects were listed for Regional South and West Asia but no documents were provided, while a further seven countries listed neither projects nor documentation. 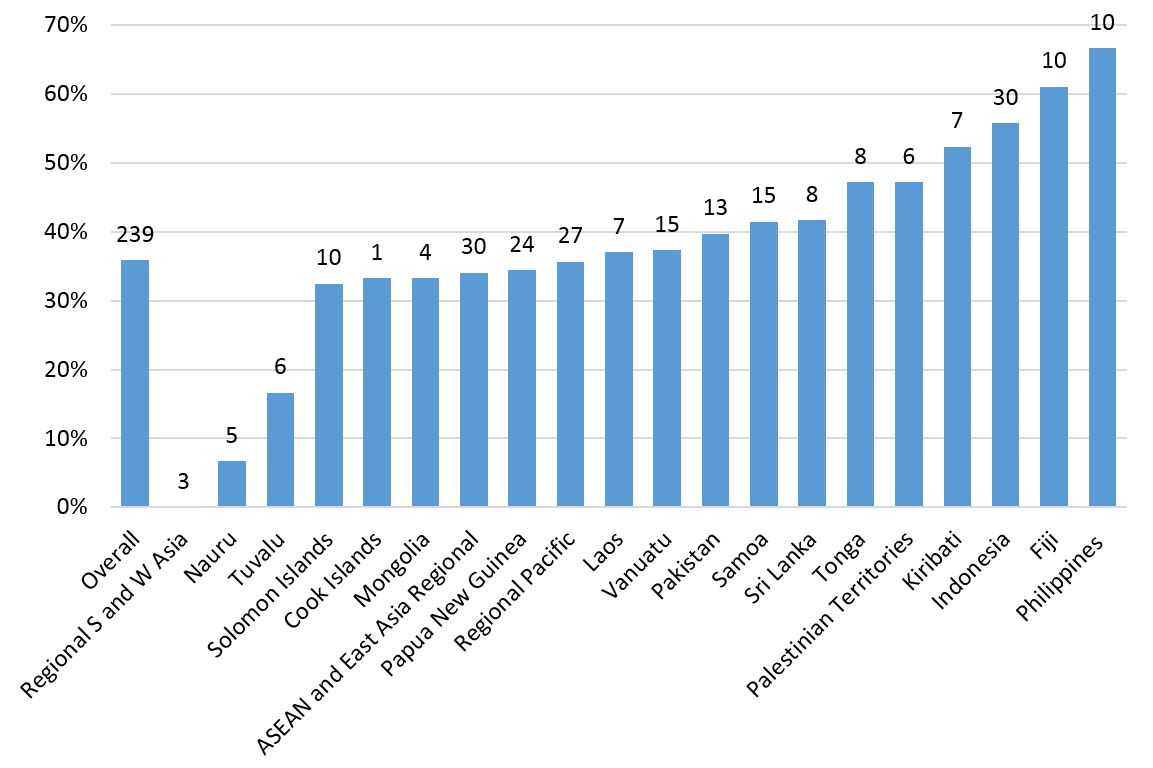 Notes: Data labels show the number of projects audited in each country/regional grouping. No project-level documentation was available for seven countries in our sample; these countries are excluded from Figure 1.

When looking only at those countries which were included in both the 2013 and 2016 audits, the variation is even starker (Figure 2). Some countries improved significantly (Kiribati, Solomon Islands), while others slipped (Vanuatu, Samoa). On average, project level documentation declined by 10.4 percentage points (or 4.4 points if we exclude countries which no longer provide any project-level information on the DFAT website). 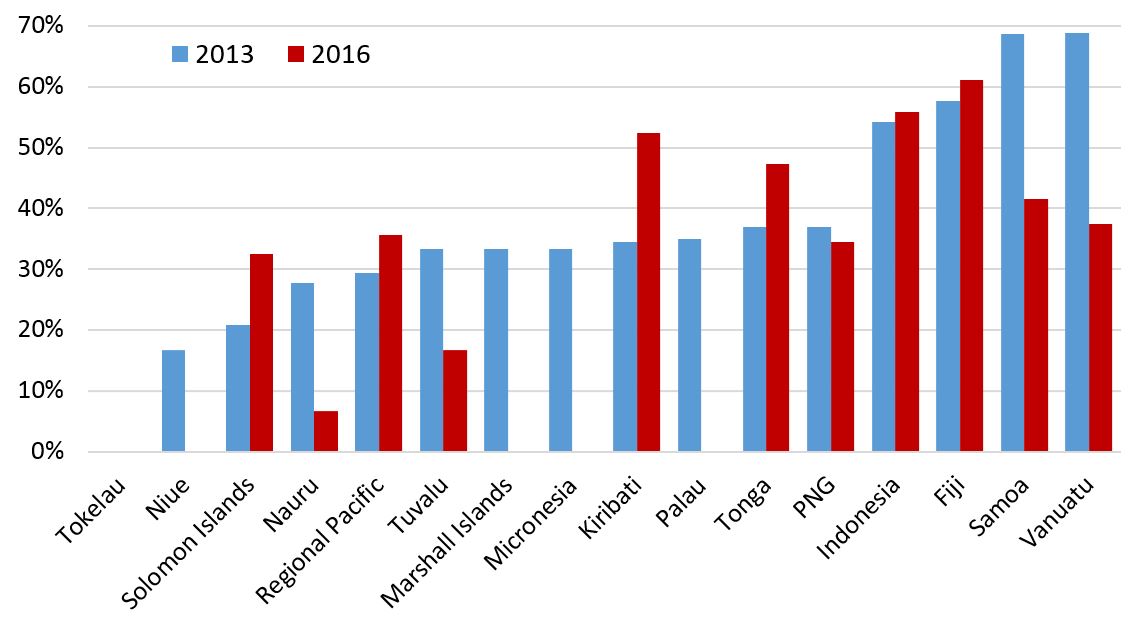 We also looked for trends or patterns in transparency across regions and sectors. Despite the high volume of Australian aid directed to the Pacific, it ranked third of the four regions included in the audit, with an average availability of project documentation score of 37.5%.

When it comes to sectors, not only did we find that the average availability of project documentation score dropped in every category, but also that there was a greater range of scores in 2016 as compared to 2013 (Figure 3). Projects classified under ‘Infrastructure and trade’ made up the greatest proportion of projects audited (28%; n=68), likely reflecting the importance of trade and economic development as part of DFAT’s aid policy platform. However, this did not translate into a high transparency score. 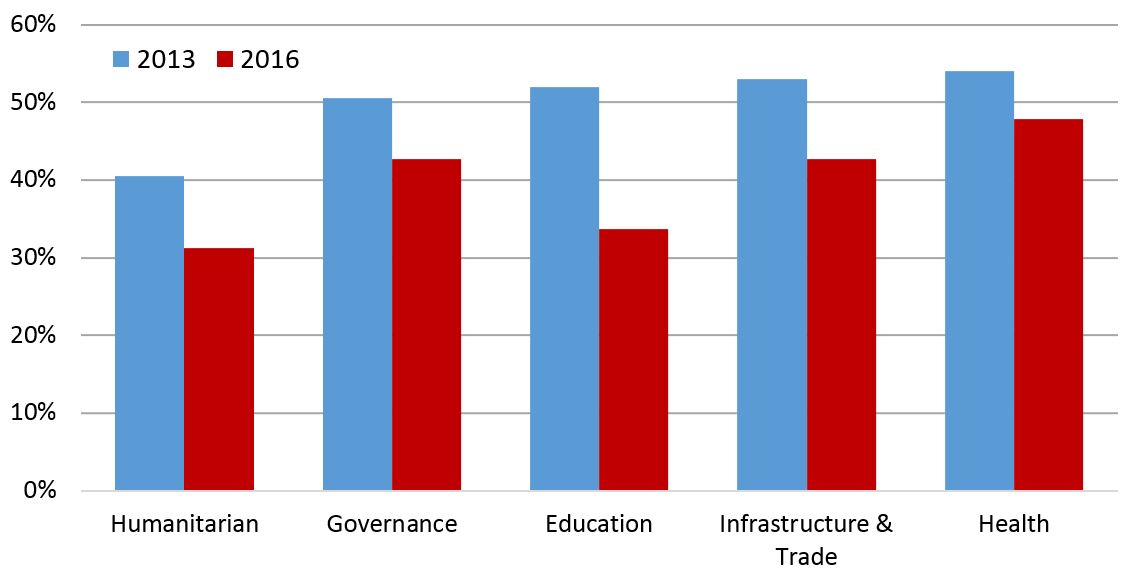 We also examined whether there was any correspondence between the relative size of projects (as measured by their average annual budgets) and transparency, something that wasn’t calculated in the 2013 audit. In Figure 4, each red dot represents an individual project included in the audit. Projects with the smallest budgets, under $1m per year, tend not to receive a score above 67% — only one project did so. Conversely, no project with a budget greater than $20m per year scored less than 33%. Regression analysis suggests that a statistically significant relationship between project size and transparency score does exist, but that project size only explains about 7% of the variability in transparency scores. 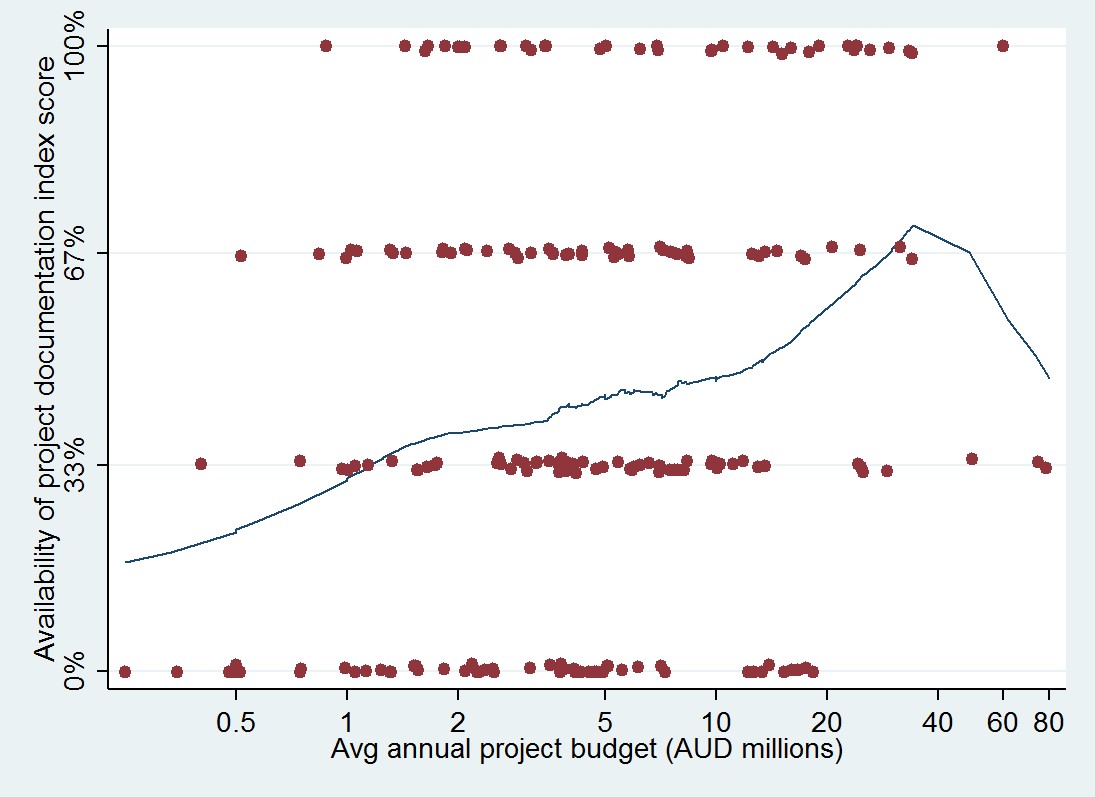 Note: the Lowess regression line in this figure shows the relationship between project budget and transparency score. The relationship is positive; but because the x-axis is on a log scale, the gradient of the line shows the average rate of improvement diminishes as the scale increases.

There were a few positive outcomes of the audit that are worth highlighting. It was encouraging to discover that the overall availability of project review and evaluations increased by nearly seven percentage points since 2013; no doubt in part due to ODE’s efforts of late. As Figure 2 shows, transparency improved markedly between 2013 and 2016 for particular country programs, such as Kiribati. And nearly half of projects included one or more related links to other webpages that provided additional information about the project or context.

Our audit report [pdf] concludes with a number of recommendations, including to develop a dynamic database for publishing project-level information, to increase clarity around the completeness of coverage of aid-funded projects on the DFAT website, and to establish annual targets for the publication of documentation in the aid program. The latter formed part of the Transparency Charter [pdf] established under AusAID (and since quietly abandoned), and the idea continues to have merit. All of this is possible, but requires bureaucratic and political commitment.

Ensuring transparency and accountability in aid programs can be a tedious, resource-intensive task, and one that carries certain reputational risks. But failing to keep up with other OECD DAC donors on project-level transparency also presents a risk of a different sort to the reputation of Australian aid. And if publication becomes standard practice, the financial and human resources required to administer it will be minimised. Over the last year or so, it’s clear that steps have been taken to improve transparency in the aid program at the macro level, through the publication of documents such as the Green and Orange Books, Aid Investment Plans and Program Performance Reports. Let’s hope this improvement continues to filter through the aid program right down to the project level.