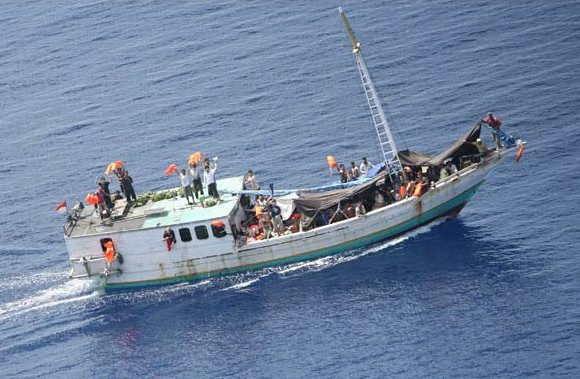 Closing the country: where to next for Australia’s asylum seekers?

What does the future hold for refugee policy in Australia? Following a brutal policy approach to people seeking asylum in recent years and a blanket policy of harsh deterrence from both major parties, a key question now is whether these policies are sustainable, let alone desirable, over the longer term. Already, tensions and challenges have emerged that threaten Australia’s absolute refusal to face up to its refugee responsibilities.

Since the Expert Panel on Asylum Seekers report was handed down in August 2012, Australia has introduced a wave of policies designed to prevent and deter asylum seekers from arriving by boat. The deterrence focus of Australia’s policies resulted in the reopening of offshore detention in 2012, as well as the establishment of Operation Sovereign Borders, the interception and return of asylum seekers at sea and the denial of resettlement in Australia to any refugee who arrived by boat after 19 July 2013.

Asylum seekers who arrived in Australia after August 2012 face a new limited refugee status determination process known (misleadingly) as ‘fast track’ processing, at the same time as access to government-funded legal advice has dried up. For those who are found to be refugees after passing these hurdles, there is now only the choice of a three-year Temporary Protection Visa (TPV) or a five-year Safe Haven Enterprise Visa (SHEV). There is no prospect of family reunion, citizenship or the ability to travel overseas and return. The Refugee Council of Australia’s recent paper summarises these policy changes.

With the Australian Federal Election being held this weekend, many may be wondering what the future holds for refugee policy in Australia.

Unfortunately, for those concerned about the protection of refugees, an analysis of each party’s election platforms reveals that many of Australia’s deterrence policies are likely to remain after the election, whichever party wins.

Both Labor and the Coalition remain staunchly in favour of offshore processing and turning back boats of those who seek asylum, despite some Labor candidates expressing concern about the policy. Labor has attempted to differentiate itself from the Coalition by claiming that it will resettle all those found to be refugees in third countries and allow independent oversight of the centres.

Yet this commitment only highlights the issue at the heart of the hasty promise by former Labor Prime Minister Kevin Rudd that no asylum seeker who arrives by boat will ever come to Australia. The problem with that promise is that neither party has ever figured out how to resettle the remaining 905 men in the Manus Island offshore detention centre or the approximately 1200 men, women and children on Nauru. The Coalition’s Cambodia deal has been an expensive failure, and no other country appears willing to take Australia’s refugees. It is clear that Labor had no exit strategy when they reintroduced offshore processing in 2012, and the Coalition, similarly, has no public plan for ending the indefinite detention and temporary resettlement on Nauru.

Nor has the Government resolved the situation on Manus Island, following the ruling by the PNG Supreme Court that offshore processing on PNG is unconstitutional. Despite the decision being handed down just before the start of the election campaign, voters have heard very little about the implications of the PNG decision.

It is not clear what policy the future government of Australia will introduce to resolve this issue, with the Immigration Minister Peter Dutton asserting that the issue is solely PNG’s responsibility. So far, the only change has seen the Manus Island detention centre transition to an ‘open centre’ with people only permitted to leave the compound by contractor-sanctioned bus. However, asylum seekers in the centre say that nothing much has changed, and many are still fearful of leaving the compound for fear of violence from locals. The PNG Supreme Court has indicated that if all people are not released they will enforce their judgement.

Returning to the Australian arena, there is more divergence on how refugees and asylum seekers in Australia should be treated. If elected, Labor will abolish TPVs and provide all those found to be refugees permanent visas. Labor has also committed to reinstating the previous refugee status determination procedure, with appeals conducted by an independent body. The Greens and Labor have also committed to reforming detention in Australia, with the Greens additionally committing to ending the detention of children and enforcing a 30-day time limit on detention while health and identity checks are made.

While the short-term future for humane asylum policy in Australia appears bleak, it is clear that the patched together system now in place is teetering on the verge of collapse. The current system of offshore processing is unsustainable, especially in light of the PNG decision. Additionally, the great harm these policies are having on the lives of thousands of people cannot be underestimated. Boat turnbacks are causing significant diplomatic tension with Indonesia, and resulting in thousands of asylum seekers being trapped in limbo there. Given the enormous need for protection worldwide, with over 65 million people forcibly displaced, Australia cannot and should not continue to maintain a policy of harsh deterrence.

Asher Hirsch is a Policy Officer with the Refugee Council of Australia, the national umbrella body for refugees and the organisations and individuals who support them. He is also completing a PhD at Monash University in refugee and human rights law. This post is published in collaboration with Policy Forum, Asia and the Pacific’s platform for public policy analysis, debate and discussion.

Asher Hirsch
Asher Hirsch is a Policy Officer with the Refugee Council of Australia, the national umbrella body for refugees and the organisations and individuals who support them. His work involves research, policy development and advocacy on national issues impacting refugee communities. He is also completing a PhD at Monash University in refugee and human rights law. His PhD investigates Australia’s migration control activities in Southeast Asia, which aim to prevent asylum seekers from reaching Australian territory and seeking protection. He holds a Bachelor of Arts, a Master of Human Rights Law, and a Juris Doctor.