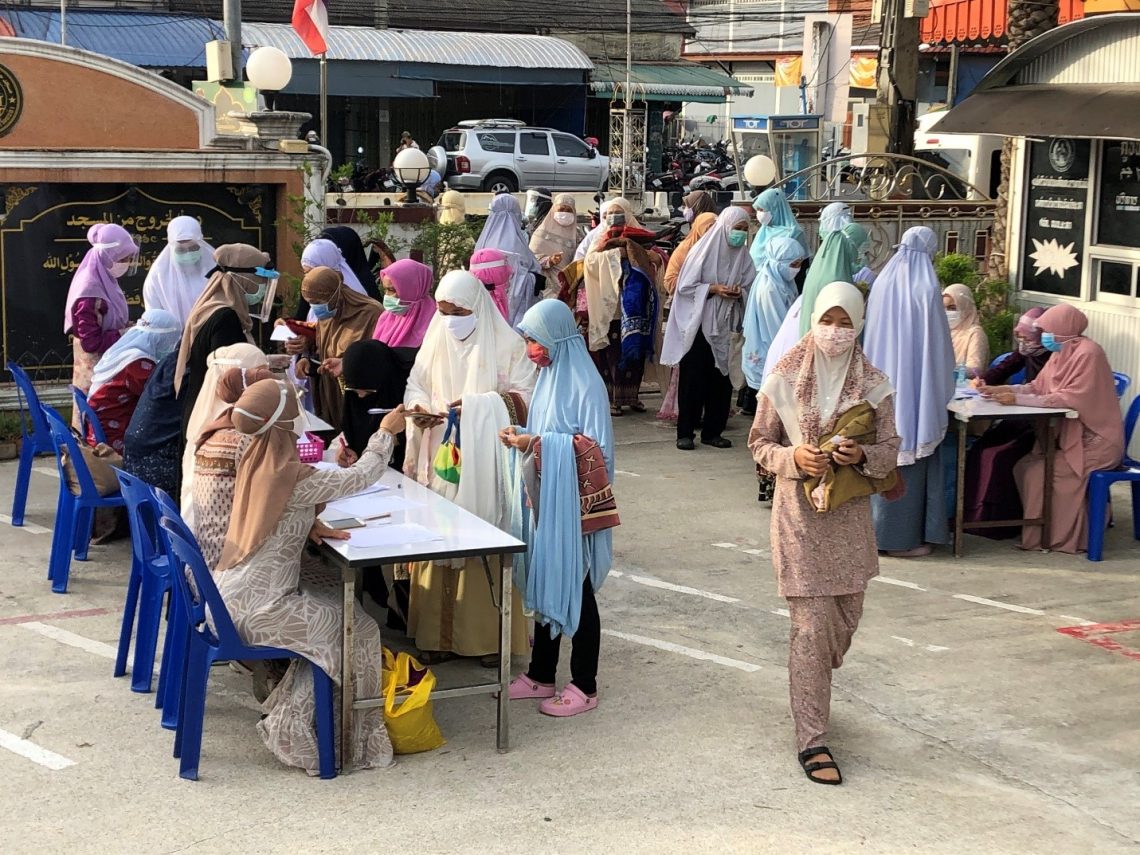 Muslim women in Thailand’s Yala province queuing for seat designation at the Central Mosque for a mass prayer at the end of Ramadan (Photo: Don Pathan)

For Thailand’s far southern region, where a separatist insurgency has claimed more than 7,000 lives since January 2004, the COVID-19 pandemic has had some positive, unexpected consequences. Civic space has opened and diverse constituencies including separatist groups, activists, civil society organisations (CSOs), the state and army, are collaborating and cooperating to tackle a common threat.

The three southern provinces of Thailand (Pattani, Yala and Narathiwat) and the four Malay-speaking districts in Songkhla – with a population of around two million – have been contested space, on and off, since the Sultanate of Patani was conquered in 1785 by the Kingdom of Siam. The majority of the region’s residents today identify as Malay Muslims. They embrace a different set of historical and cultural narratives, underpinning their collective identity, from those that predominate among the Buddhist majority in Thailand.

Armed insurgency erupted in the early 1960s as a result of a Thai policy of assimilation, which most Malays rejected on ethno-religious grounds. Separatist violence ended in the early 1990s but in mid-2001, a new generation of militants surfaced under the command of the Barisan Revolusi Nasional (BRN), the one long-standing separatist group that controls virtually all of the combatants on the ground today. Although the BRN and Thai government entered peace talks in January 2020, violence on the ground has continued unabated.

Since Thailand’s first case of COVID-19 was detected on 13 January, the country has managed to stave off a steep rise in infections due to various measures, such as social distancing, closing down businesses and restricting international flights and travel within the country.

The outbreak of COVID-19 has shifted these conflict dynamics in the south and stalled the official peace talks. However, the various stakeholders to the conflict are making unprecedented efforts to jointly explore ways and means to contain the virus. Significantly the BRN called a unilateral ceasefire and announced: “To create a more comfortable and peaceful environment for the Patani people, related to the work of health workers and efforts by the related agencies to control the COVID-19 outbreak, BRN will now stop all activities on humanitarian grounds because we realised that the main enemy for all humankind is COVID-19.” The move was in line with UN Secretary-General António Guterres who had called for a global ceasefire to “focus on the true fight of our lives”.

Beside the armed rebels, political activists, like The Patani, and local CSOs like the Thai Islamic Medical Association (TIMA), who otherwise would not cross each other’s path, have joined hands in an outreach program. The Patani was instrumental in getting the BRN to end hostilities on humanitarian grounds. TIMA and The Patani produced live Thai and Malay language broadcasts on various social media platforms to highlight what needs to be done. Both were tireless in their efforts to convince Muslim leaders and religious authorities to comply with the government’s public health initiatives by going door to door.

Convincing the Tablighi Jamaat, a conservative Islamic reformist movement, to embrace these warnings, however, was difficult for state agencies and the CSOs. The Tablighi members ignored warnings against participating at two religious’ gatherings in early and mid-March 2020 in Malaysia and Indonesia, which have led to major virus clusters in both countries. Out of the 350 Thai members who went to these two events, 170 returned to Thailand with the virus. And these were just the first generation of positive cases.

Public anger at the Tablighi for ignoring these warnings dominated discussions on social media, forcing the government and religious authorities to come together quickly and quietly to contain the situation by issuing humanistic messages to counter the negative messages which could prompt Islamophobia.

Ultimately, Muslim groups in the far south, who don’t always see eye to eye when it comes to interpreting Islam, decided to place the needs of their community above their ideological differences and join forces to contain the virus. Notably, 13 Muslim members of parliament came together, as a Malay Caucus, to address the specific needs and concerns of the people of this region. Ironically, the ongoing conflict between the state and the separatists did not provide the impetus to bring these MPs together. Yet, COVID-19 did.

Youth leaders and political activists – many of whom advocate rights to self-determination for the people of Patani – were another active constituency. They joined hands with the medical community to advocate for a cleaner environment to counter the virus. They took their message straight to the Tablighi leaders in southern Thailand and formulated a set of recommendations for members of the group.

These activists also extended humanitarian and emergency support to returning migrant workers who were stranded in Malaysia after the Thai government closed borders on 18 March. On 19 April, Thailand began to reopen its border with Malaysia. Many among the crowds of undocumented returnees didn’t possess the required “Fit-to-Travel” certificate from the Thai Embassy in Kuala Lumpur, nor could they afford the 800 baht fine for crossing the border without a proper permit.

However, the collaborative and complementary efforts of the Thai army and local CSOs ensured these migrants returned safely and efficiently. While the army (who would otherwise be engaged in counter-insurgency operations) managed the border crossing and quarantine advisory after the border with Malaysia had reopened, local CSOs were on standby with an emergency fund to assist returnees with the 800 baht fine and to coordinate with returnee relatives back in their locked-down villages.

In Thailand’s far south, which has been covered by a 17-year-old security grid aimed at containing the movement of separatist militants, these unexpected acts of humanity and solidarity among disparate constituencies reveal the opportunities that emerge when civic space opens. COVID-19 refocused attention and redirected purpose towards a common threat. The civility and humanitarianism that has resulted offers some hope for future collaboration on a peaceful political settlement.