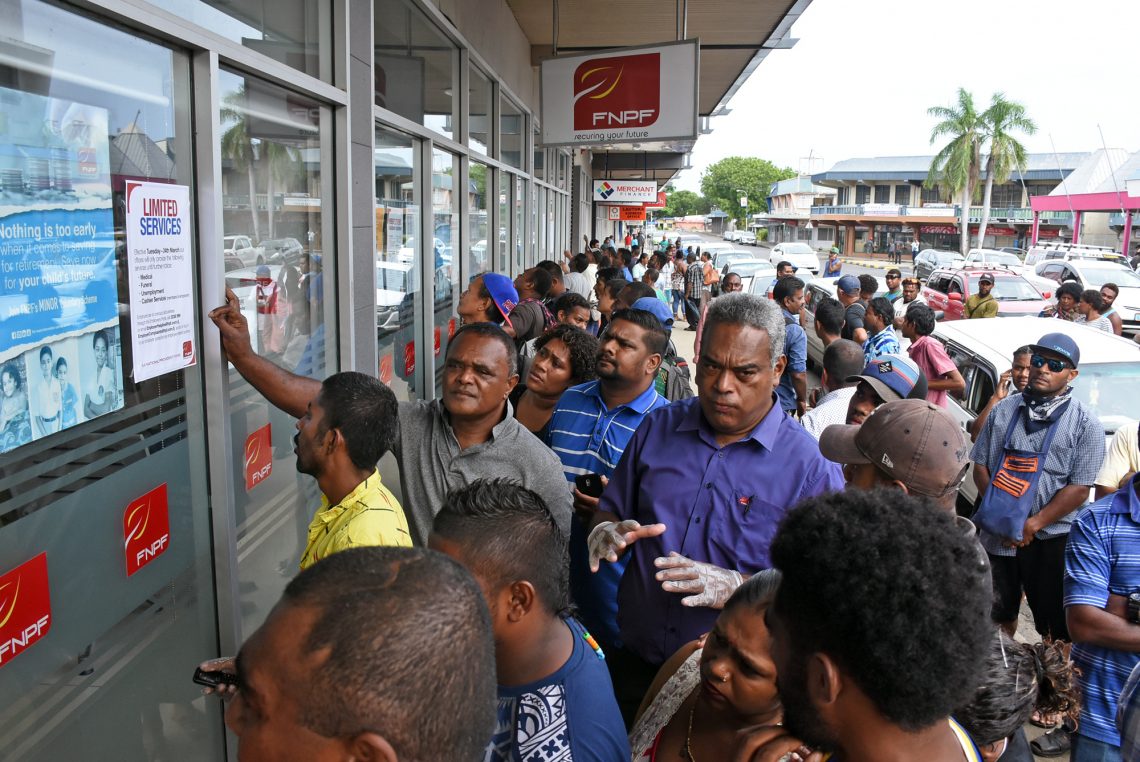 Soon after the announcement of Fiji’s first confirmed case of COVID-19 on Thursday 19 March, Lautoka (the ‘Sugar City’), Fiji’s second-largest city and home to that first case, was placed under lockdown. The two main access roads into the city – from Nadi International Airport, and leading to Ba town on the other side – were now to be closed off, with checkpoints coming under the command of the Police Commissioner, Sitiveni Qiliho, a former military man.

Stringent measures announced by the Prime Minister included that all “nightclubs, gyms, cinemas, swimming pools, fitness centres and even recreational contact sporting engagements” would be closed effective immediately. This included the closure of non-essential businesses in the greater Lautoka area. To remain open were supermarkets, pharmacies, and other essential businesses.

But life in the city of Lautoka, on the day of the announcement and thereafter, has carried on almost as normal, according to relatives, friends, and photographs on social media. People went to work in filled buses, congregated on street corners to have hushed conversations on COVID-19, and shops, the market, grog places and Zumba classes carried on as per normal.

On the first day post-lockdown, entry into Lautoka for Fiji’s oldest newspaper, the Fiji Times was disallowed, leading to much outrage and anger expressed through social media postings. While the Fiji Times was left at the border, the Fiji Sun, widely perceived as part of the Fiji First Government propaganda machinery, was allowed through the checkpoints. Individual protests and appeals via social media, including by Australian journalist Jemima Garrett, fortunately saw the Fiji Times back in Lautoka homes on the third day of the lockdown.

The Lautoka lockdown means that many have been left to fend for themselves. A Suva resident myself, I cannot visit my elderly parents. Early panic buying occurred, and only select supplies are being allowed through the checkpoints. Fortunately, NGOs, citizens, and ratepayers’ groups have mobilised, to help the vulnerable and needy.

As further confirmations of positive cases were identified, announcements were made that Fiji’s two international airports in Nadi and Nausori were to cease flights in and out of Fiji. A flurry began in the development sector and diplomatic circles as friends said rushed goodbyes and hurried to get the last flights out.

Fiji is a cosmopolitan country. I’ve had to cancel my visit in April to Australia for my nephew’s wedding in Sydney, which has been postponed. Some 350 relatives from Fiji and the Fiji Indian diaspora in the United Kingdom, United States and New Zealand, all of whom had been invited to the wedding, were left to deal with cancelling air tickets and hotel bookings.

On 20 March, all schools in Fiji were told to go on early school holidays. Social distancing and working from home were encouraged where possible. My children are now at home with me, enjoying extended Netflix viewing, and time in the garden, learning basic skills on communal food security.

But we are all worried. With no tourists coming to our shores, hotel prices have crashed. Unemployment and hardship are inevitable with the shutdown of Fiji’s number one foreign exchange earner – tourism.

All the while, the number of cases continues to rise. At the time of writing, Fiji has a total of five cases, including cases of community transition. (In fact, the fifth case was a Zumba partner of the first.) The entire nation’s attention is now on the count. We are all trying to make sense of dos and don’ts as mainstream and social media, and the coconut wireless, become saturated with COVID-19 prevention measures, analysis, and comparisons of curves. Frequency of announcements by the Prime Minister, the Health Minister and the government team are increasing. Some of the measures initially applied to Lautoka have now been put in place countrywide, although there is not yet a complete lockdown.

A FJD$1 billion COVID-19 stimulus supplementary budget was announced by the Fiji Government on 27 March. The budget includes measures to cushion the impact of unemployment, though the provision made for workers to access funds from their own superannuation accounts has been controversial. The budget projects a contraction in GDP growth of -4.3% and a fiscal deficit of 9% of GDP.

While the debate around the budget measures is legitimate, it was disheartening to see the military leaders of Fiji’s first coup and most recent coup – the now Opposition Leader and Prime Minister, respectively – tussling over who should be behind bars. Adding to the sense that the priorities of the political class were not in the right place, were the recent arrests of two prominent Fijians, both of whom were taken in for questioning on their posts on social media in relation to COVID-19.

At first glance, or as one browses through some of Fiji’s media, it seems that the Fijian government is ticking all the right boxes. But many, like me, think that Fiji needs to take its cue from New Zealand to strengthen its strategy to save lives. While some large supermarkets and shops outside of Lautoka have started limiting entry to 20 customers at a time, there is still a lot of crowding. At local markets, where the vast majority, especially the poor, shop for fresh vegetables, fruit and staple root crops, at bus stops, and on recently departed ships for Fiji’s outer islands, the importance of physical distancing measures have not sunk in.

What is needed is a bipartisan approach with clear policies and messages. Fiji needs its leaders to put differences aside. For self-care and community-care to be understood and to be effective in Fiji, a comprehensive, loud, bipartisan, united leadership is required.