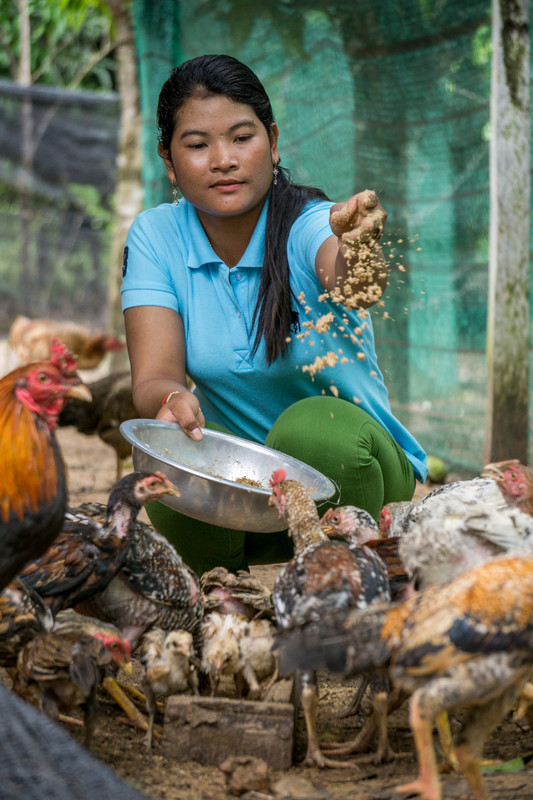 Sreymao has been trained by CARE as part of the Local Economic Leadership project in Cambodia, which is supported by the Australian Government (Credit: GMB Films/CARE)

The delicate dance of gender equality in Australia’s foreign policy

The Australian Government wants global gender equality. The Foreign Minister has championed it across Australia’s aid program and foreign policy, and the Minister for Defence wants to make the women, peace and security agenda ‘part of the DNA’ of the Defence Department’s work.

And so they should: there are many, many, many good reasons to promote gender equality globally.

So what is the Federal Government’s vision for making this mission a reality, and how does the Federal Budget lay out the path?

The Government has elevated gender equality to stand alongside the other five strategic objectives of the aid program. Of ten aid program targets, one relates to gender equality and it is ambitious, requiring ‘at least’ 80 per cent of aid investments to ‘effectively address gender issues in implementation’. Minister Bishop has established the Gender Equality Fund, which in the 2018-19 Budget enters its fourth year, and ensures Australia actively defends reproductive rights on the world stage (with funding for family planning finally inching up again). When Australia hosted the G20 in Brisbane in 2014, it set its first gender equality target: to reduce the gap in women’s workforce participation globally by 25 per cent by 2025.

The OECD’s recent Review of the Australian Aid Program, recognised gender equality as a ‘genuinely’ cross-cutting issue for DFAT. Compared to the OECD average, Australia ensures that a much higher portion of its aid spending goes to programs with gender equality objectives (54 per cent compared to the OECD average of 36.3 per cent in 2015). We stand among a cohort of countries leading the way in promoting gender equality globally, not too far behind governments that have embraced an explicitly feminist foreign policy or aid program (Sweden and Canada respectively).

While these developments are to be applauded, we are not keeping up with our ambition. We have not yet reached the 80 per cent gender equality effectiveness target, although it is very close. While it’s tempting to criticise this, it’s important to note that the gender target is the most robust of the aid targets and rigorously assessed within DFAT. In this context, it’s good to see DFAT holding itself accountable to high standards, rather than lowering the bar in order to keep up appearances.

In other areas, there are looming challenges. The 2018-19 Budget flags that our ‘highest ever contribution’ will go to the Pacific ($1.3 billion, or 31 per cent of the aid program). However, we know from the 2016-17 Performance of Australian Aid report and the OECD data that aid to Pacific countries is performing worse in terms of promoting gender equality. The Government could address some of this persistent under-performance through a target for aid spending, identifying the proportion of aid with a ‘principal’ or ‘significant’ gender equality objective, as well as introducing funding targets to support women’s rights organisations.

Such targets, and more transparency, would remedy the challenge of tracking what proportion of our aid goes towards promoting gender equality. This has been difficult – for example, the Performance of Australian Aid report reveals figures that are different from those filed by the OECD. Answers to Senate Estimate Questions reveal different tallies of aid spending on gender equality initiatives than those presented in budget papers.

Instead, and despite increasing spending across the Budget, the aid program has suffered continual cuts, bringing Australian aid to a record new low. As Devpolicy has detailed, by 2021-22 the Government plans to dedicate just 0.19 per cent of our Gross National Income to Overseas Development Assistance, putting us further at odds with the record number of countries expanding their aid programs.

This stands in stark contrast to the Government’s ambition for weapons. By 2021, for every dollar we spend on aid, we will spend $11 on defence. For the price of a single submarine, or even the $3.8 billion the Government reportedly intends to loan weapons manufacturers, we could fund almost the entire aid program for a year.

Looking forward to 2030, we have an ambitious task ahead of us to shape a future that is better for everyone. Australians and our neighbours all benefit from a world that is more just and more peaceful. Unfortunately, our Government has not adequately resourced this vision for gender equality and is minimising the valuable and complex work of the Australian aid program.

The Government has understood and embraced the value of gender equality and our role in achieving it. But if it wants it, it needs to fund it (and track it transparently).

Alex Lamb
Alex Lamb is the Advocacy and Policy Adviser for CARE Australia.