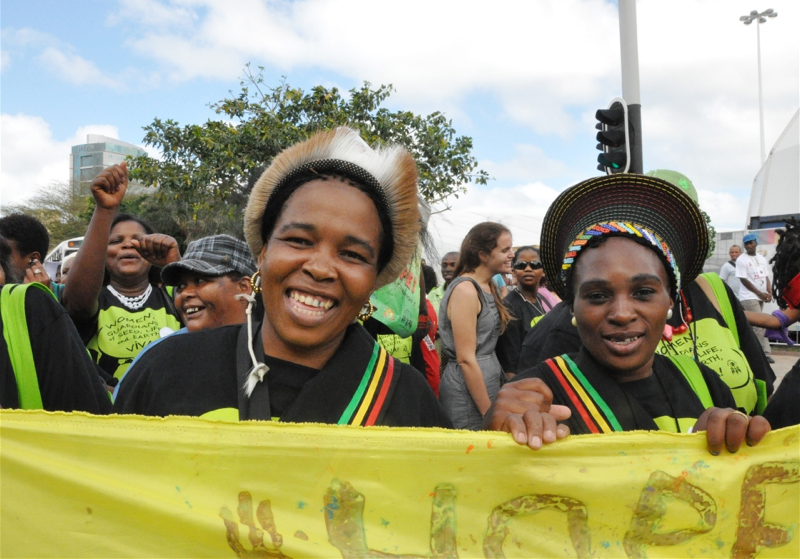 After two weeks of talks at COP17 in Durban, negotiators have agreed to start working towards a new climate deal with legal force.

This is the first time that world governments have committed to write a comprehensive, legally-binding global agreement to reduce emissions that includes both developed and developing countries.  The new agreement is to come into effect in 2020.

The Kyoto Protocol period was also extended by five years to 2017.

One of the other big issues of the conference has been climate finance. The negotiators agreed on some aspects of the design for a Green Climate Fund to assist developing countries with climate change adaptation and mitigation. However, little was said on where the finance would come from or how much was needed.

After the lengthy negotiations, the President of the conference, Maite Nkoana-Mashabane, declared: “We came here with plan A, and we have concluded this meeting with plan A to save one planet for the future of our children and our grandchildren to come. We have made history.”

However, whether the conference was a success or a failure is now a hotly debated issue in blogs and the media.  While leaders such as Julia Gillard have welcomed the agreements at the conference, scientists, civil society groups, small island states and environmental organisations have been far more critical of the outcome in Durban.

Just prior to Durban, the international community gathered in Busan, South Korea, to flesh out a new agreement on aid effectiveness.

On the Devpolicy blog, Marc Purcell, Ian Wishart and Glen Bond wrote on the Busan outcomes.  The CGD has a blog post from Nancy Birdsall summarising what happened at the Forum — including the significance of China’s participation. Owen Barder was also present in Busan and blogged on the discussions.  The conference also saw a new deal struck for fragile states, detailed here.

The global financial crisis has seen a fall in funding for ‘neglected’ diseases such as HIV and AIDS, tuberculosis, meningitis and malaria, according to a new report [pdf] by Policy Cures.

Australia and the UK are among the few countries that have not cut their aid research budgets. However, overall there has been a $100 million drop (a drop of 3.4 percent) in funding worldwide for neglected diseases in the past 12 months. The brunt of the funding cuts has fallen on product development partnerships, potentially jeopardising new developments in lifesaving medicines.

The Executive Director of Policy Cures, Mary Moran, has called on Australia to do more to support the development of new tools to combat the spread of neglected diseases.

Gay rights and US aid

US President Barack Obama has told officials to consider how countries treat gay and lesbian citizens when making decisions about the allocation of foreign aid.

Secretary of State Hillary Clinton also spoke in Geneva on the US’s commitment to use all of its diplomatic tools to advocate for gay rights.  While the US will not cut or tie aid to push changes, it will urge aid agencies to deliver “swift and meaningful” responses to incidents that threaten the rights of GLBTI persons.

Malawi has been one African country to come under fire recently for its treatment of two men who attempted to marry. However, the country’s justice minister has now announced that it will look at decriminalising homosexuality in response to public pressure.

Meanwhile, Good Intentions Are Not Enough looks at whether proper identification can help transgender people better survive in humanitarian emergencies. In the aftermath of the 2004 Indian Ocean tsunami, reports showed that third-gender people were particularly vulnerable. Those without proper identification which recognises their gender can be excluded from accessing humanitarian relief in disasters or situations of unrest — this is currently a concern in Pakistan, where widespread flooding has affected millions.

There has been a heavy concentration of international commemorative days in the past month, sparking blogs, announcements, reports and more.

December 1 marked World Aids Day, bringing forth new pledges of funding from donors (such as the US) as well as calls for new AIDS funding models to beat the international financial squeeze. Prominent AIDS campaigner Bono and fellow musician Alicia Keys visited Capitol Hill to call for continued support in the face of potential cuts to US foreign aid. Bono also contributed to the New York Times on the issue, highly praising the role of the US and labelling this year as ‘the beginning of the end of AIDS’. The chief of US AIDS optimistically agreed that a tipping point for the disease is now within sight.

International Anti-Corruption Day fell on December 9.  The day was marked with commentary, celebrations, protests… and even a fast. In Indonesia, starting anticorruption campaigns at the primary and high school level is now being viewed as a way to crack the country’s graft problems, while globally the World Bank advocated for technology as a tool for fighting corruption. In Afghanistan, the head of an internationally-backed corruption watchdog threatened to quit unless President Hamid Karzai started to prosecute corrupt officials. Transparency International also released its latest Corruption Perception Index on December 1.

International Human Rights Day was marked on December 10, commemorating 63 years since the establishment of the UN’s Universal Declaration of Human Rights. This year’s Arab Spring uprisings have brought human rights into focus and the use of social media tools by human rights campaigners was recognised. The day was also a reminder that in countries such as Iran, human rights violations are a recurring challenge. There were also questions raised about corporate responsibility for human rights.

Additionally, International Day of Disabled Persons was marked on December 3 (the first World Report on Disability, released by WHO this year, is well worth a look for those wanting to learn more), and International Volunteers Day was held on December 5. The 16 Days of Activism Against Gender Violence also kicked off from November 25, the International Day for the Elimination of Violence Against Women.