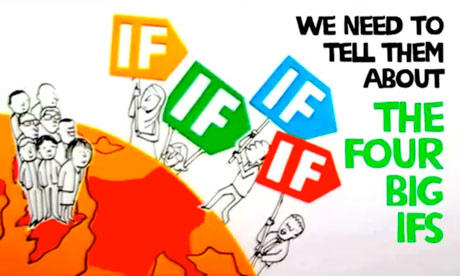 In early December Justine Greening, the UK’s new Secretary of State for International Development, delivered a keynote address committing DFID to even greater levels of transparency (she also highlights this new policy on the Guardian’s development blog here). Owen Barder provides more analysis in this blog post. Of particular note (a point highlighted by Barder, and also picked up by The Economist) is the requirement that any organisation receiving DFID funds must publish clear information about where the money is going. She has called on other donors to follow suit in her ‘Aid Transparency Challenge’.

NGOs banding together against hunger

This month saw the launch of the ‘Enough Food for Everyone IF’ campaign in the UK. This aims to end global hunger by targeting four major underlying issues: aid volume, tax evasion in developing countries, land use, and transparency on the part of donors, developing country governments and corporations. With over 100 non-government aid, development and charity organisations joining forces (and endorsement from the likes of Bill Gates and Desmond Tutu) for this campaign, it is the largest showing of unity from UK development NGOs since the 2005 Make Poverty History campaign. The campaign will lobby David Cameron to use the UK’s presidency of the G8 to leverage action on this issue. The Guardian’s development blog asks what impact this new campaign will have, and calls for comments, in this blog post. For more information check out this short video:

The World Bank released its latest East Asia and Pacific Economic Update in December. As a whole, the region will have grown at 7.5 per cent in 2012, with growth expected to tick up to 7.9 per cent in 2013. The region accounted for almost 40 per cent of global growth in 2012. This is good news for poverty, with the report showing that the percentage of the population in East Asia and the Pacific living under $2 a day has dropped from 54 per cent in 2002 to 25.8 per cent in 2012. While the report emphasises the resilience of the region, it also draws attention to the growing concern of youth unemployment in its rapidly urbanising countries. 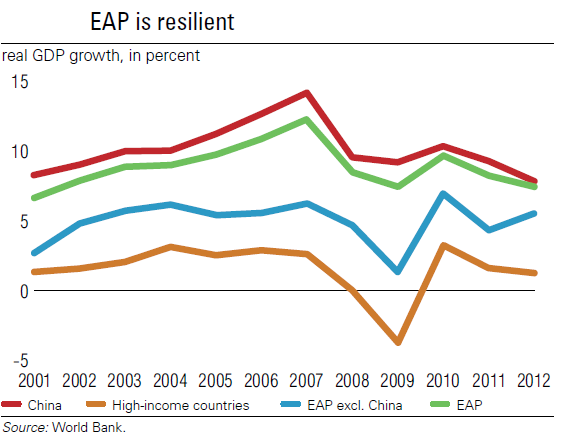 The World Bank also released its 2013 Global Economics Prospects Report (available here, blog post here, President Jim Yong Kim’s comments here), which shows that four years on from the global financial crisis developing countries still face an uncertain outlook. While risks are less than they were a year ago, the report states that poor countries need to push harder to build their own economic strength and reduce their reliance on recovery in developed countries. In particular, they are urged to pursue productivity-enhancing policies and to rebuild the fiscal and social policy “buffers” depleted in the response to the global financial crisis.

The UK has reaffirmed its commitment to aid reaching 0.7 per cent of GNI in 2013.

The UN High-Level Panel of Eminent Persons on the Post-2015 Development Agenda held its second substantive meeting in Monrovia, Liberia, late last week. The first such meeting, in London last November, focused on poverty, social development and equity. The Monrovia meeting, whose communiqué is here, focused mainly on the factors contributing to sustainable economic growth. Next up is a discussion in Bali, in March, about global partnerships and financing for development.

Bertrand Badré, a French National, was appointed Managing Director for Finance and Chief Financial Officer of the World Bank in December.

A new World Bank report looking at rapid urbanisation draws on the successes of Korea, Singapore and Japan to offer a “roadmap for building resilient sustainable cities”.

A new World Bank report claims that reducing supply chain barriers could increase global GDP by 4.7 per cent, up to six times more than the impact of reducing all import tariffs.

This month the ADB re-entered the US bond market with a $US1 billion seven-year global benchmark bond issue. The ADB plans to raise around $US14-16 billion from the capital markets in 2013 to finance its non-concessional lending operations.

A new Centre for Global Development paper by Francis Fukuyama assesses four approaches to improving empirical measures of the quality of states, and comes down in favour of a two-dimensional framework that uses capacity and autonomy as measures of executive branch quality.

Nancy Birdsall and Lawrence MacDonald, in another Centre for Global Development piece, call for the creation of a new arm of the World Bank to provide a range of non-financial, knowledge-based services to maximise the effectiveness of national and international action on climate change.

The World Bank, in partnership with the Inter-American Development Bank, is supporting an initiative that provides open data access to project level information in a growing number of Latin American countries (and languages). You can see the website here.

Jonathan Pryke is a Researcher and Blog Editor at the Development Policy Centre.