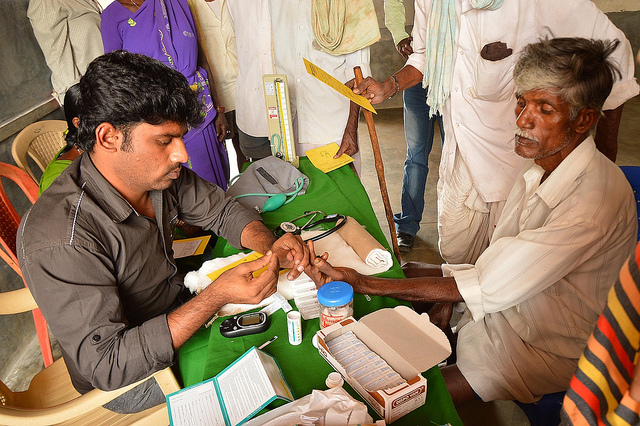 Diabetes and development: the numbers, the costs and the response

Several important new reports that have just been published by the World Health Organization (WHO) and The Lancet show that diabetes is a large and growing challenge, especially for developing countries in our region. This post summarises some of the key messages from the reports.

Diabetes – a chronic non-communicable disease that occurs when the body does not produce enough insulin to regulate blood sugar or cannot effectively utilise the insulin it does produce – is increasing worldwide. In its first Global Report on Diabetes, released earlier this month, the WHO estimates that 422 million adults were living with diabetes globally in 2014, compared to 108 million in 1980. WHO concludes that population growth and ageing have contributed to this quadrupling of numbers, but are not solely responsible for it. What is also important is that the prevalence of age-standardised diabetes (that is, the percentage of individuals affected by diabetes at a particular time, adjusted for the fact that older populations are likely to have a higher prevalence than younger populations to enable comparisons between countries) is growing in all regions. Global prevalence doubled from 1980 to 2014, mirroring a rise in the numbers of overweight and obese according to WHO.

Diabetes is increasing with particular speed in low and middle income countries. WHO estimates that diabetes prevalence has risen faster in low and middle-income countries than in high-income countries over the past decade. The Lancet has just published a study that claims to be the most complete estimate of trends in adult diabetes prevalence worldwide. It finds that low-income and middle-income countries, including Indonesia, Pakistan, Mexico, and Egypt, replaced European countries, including Germany, Ukraine, Italy, and the UK, on the list of the top ten countries with most adults with diabetes. Half of adults with diabetes in 2014 globally lived in five countries: China, India, the USA, Brazil, and Indonesia.

Diabetes is of special concern in the Pacific. The Lancet study found that age-standardised adult diabetes prevalence in 2014 was highest in Polynesia and Micronesia, at nearly 25 per cent, followed by Melanesia and the Middle East and north Africa. American Samoa had the highest national prevalence of diabetes (>30 per cent in both sexes) anywhere. The highest national prevalence rates are now five to ten times greater than the lowest prevalence rates (which are in some western European countries). Three factors might explain these geographical differences according to The Lancet: increase rates of adiposity (excessive body fat); genetic susceptibility; and better resourced health systems in Europe. 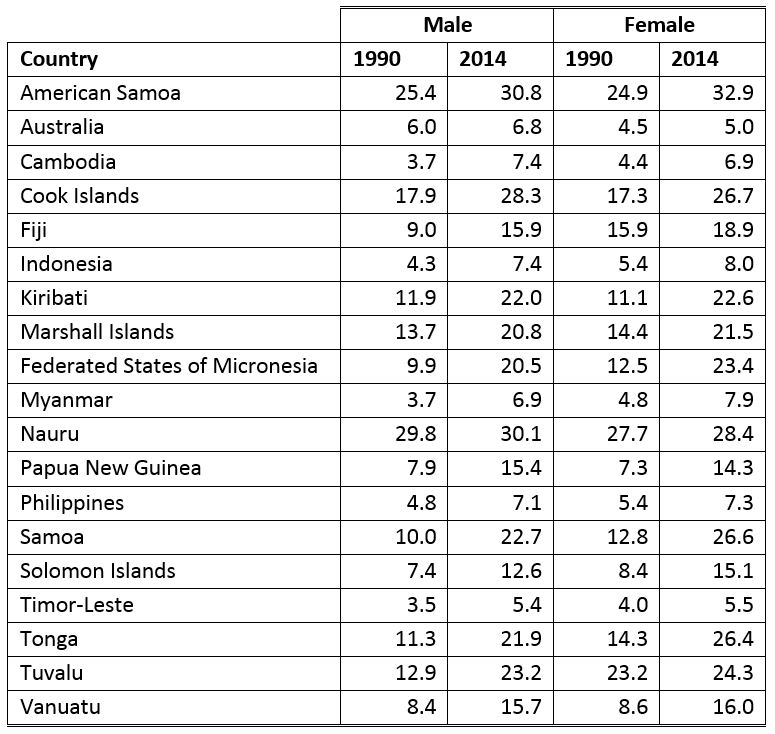 Note: confidence intervals for the estimates available in the original article.

Diabetes imposes large health costs. WHO’s latest report estimates that diabetes caused 1.5 million deaths in 2012 and that higher-than-optimal blood glucose caused an additional 2.2 million deaths, by increasing the risks of cardiovascular and other diseases. Forty-three percent of these 3.7 million deaths were premature (before the age of 70 years). Diabetes can also lead to significant disability as, over time, it can damage the heart, blood vessels, eyes, kidneys and nerves, and increase the risk of heart disease and stroke. Diabetes is among the leading causes of kidney failure. WHO also notes that uncontrolled diabetes in pregnancy can have a devastating effect on both mother and child, substantially increasing the risk of fetal loss, congenital malformations, stillbirth, perinatal death, obstetric complications, and maternal morbidity and mortality. Rates of amputation in populations with diagnosed diabetes are typically 10 to 20 times those of non-diabetic populations. The Lancet article notes that diabetes is also a risk factor for tuberculosis, another disease with a large burden in low-income and middle-income countries.

Diabetes also imposes large – yet often preventable – financial costs on individuals and society. The WHO report cites studies indicating the direct annual cost of diabetes to the world is more than USD 827 billion. The WHO report notes that the International Diabetes Federation (IDF) estimates that total global healthcare spending on diabetes more than tripled over the period 2003 to 2013 – the result of increases in the number of people with diabetes and increases in per capita diabetes spending. The WHO report also cites another study that estimates that losses in GDP worldwide from 2011 to 2030, including both the direct and indirect costs of diabetes, will total USD 1.7 trillion, comprising USD 900 billion for high-income countries and USD 800 billion for low- and middle-income countries. The Lancet study notes that nearly 60 per cent of the direct global costs of diabetes are borne by low-income and middle-income countries. An earlier post shows that pharmaceutical costs for treating advanced diabetes is essentially unaffordable in Vanuatu. Diabetes can also impose financial distress on individuals and households. The WHO study cites a study of 35 developing countries that found that people with diabetes had a significantly greater chance of incurring ‘catastrophic health expenditure’ (normally defined as out of pocket expenditures exceeding 40 per cent of income remaining after subsistence needs have been met) compared to similar individuals without diabetes.

The response to diabetes

The need for an urgent and strategic response is clear. The Lancet article estimated that, if post-2000 trends continue, the probability of meeting the global target of halting the rise in the prevalence of diabetes by 2025 at the 2010 level worldwide is lower than 1 per cent for men and is precisely 1 per cent for women. Only nine countries for men and 29 countries for women, mostly in western Europe, have a 50 per cent or higher probability of meeting the global target. WHO found that only one in three countries in lower income groups report general availability of the most basic technologies for diagnosis and management of diabetes globally. WHO also found that while 71 per cent of countries have national guidelines or standards relating to diabetes, less than half of countries are fully implementing them.

Much of the health burden and financial cost of diabetes can be prevented, or at least managed, by changes in lifestyle, including improved diet and increased physical activity. The WHO report identifies a series of affordable, feasible and cost-effective interventions that could be applied in all countries and adapted to low-resource settings. The Lancet article similarly emphasises the importance of prevention. Lessons might be taken from countries that are actively exploring policy options to help nudge their citizens towards healthier behaviours; the BMJ, for example, recently reported that a 10 per cent tax imposed by the Mexican government on sugar-sweetened beverages – which have been linked to obesity and related diseases, including diabetes – cut sales of those beverages by 12 per cent in the first year, while Australian modelling demonstrates that a similar tax imposed here would significantly reduce both morbidity and healthcare expenditure. Finding – and funding – an ‘’off ramp” whereby patients at risk of acquiring diabetes, or at risk of developing more advanced stages of diabetes, can move to healthier outcomes through primary and secondary prevention of diabetes, is an important part of broader health system strengthening.