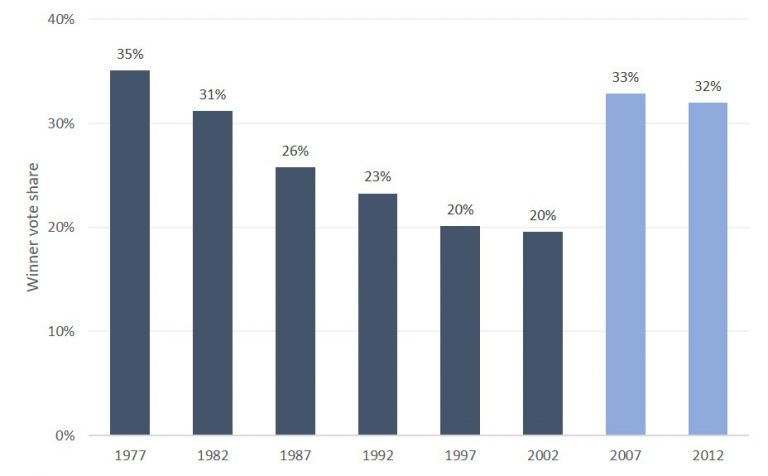 In the wake of the 2002 general elections Papua New Guinea traded in its ‘first past the post’ electoral system for limited preferential voting (LPV). (I explain how LPV works on page 8 of this paper). The new electoral system brought both promises and academic debates. Although election results data can’t speak to all of these, they can shed light on some of the impacts of LPV. In this blog post I’ll take data from the PNG Election Results Database and look at LPV’s impacts on election results and electoral politics.

Do preferences change who wins? 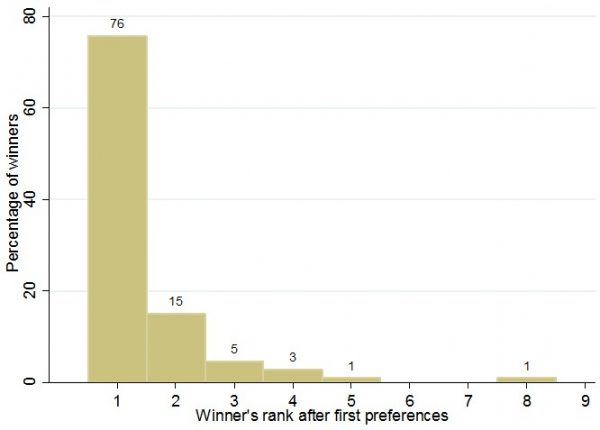 Although LPV doesn’t appear to have changed who won that often in 2012, as the next chart shows, LPV did increase the share of votes won by winning candidates. Winning candidates’ after preference vote shares were, on average, higher in 2012 than winner vote shares were under in recent first past the post elections. Given winners are now winning with the benefit of second and third preference votes, this isn’t surprising. Nevertheless, the increase is notable — in 2012 average winner vote shares were close to being as high as they were in 1982. 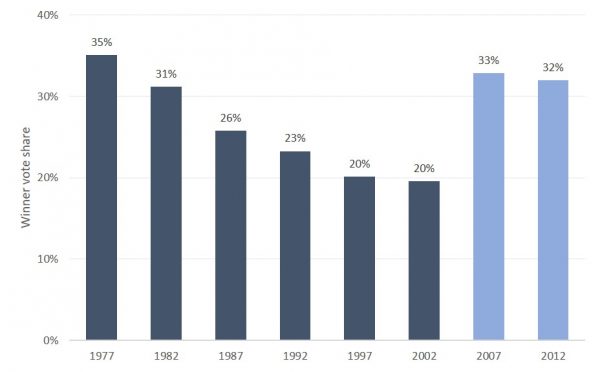 The next chart provides another way of looking at the change. It shows histograms of winning candidate vote shares for the 1997 and 2012 elections. (I chose 1997 because of the problems that occurred during the 2002 election.) The distribution moves markedly to the right between the two years (the median winner vote share rises from .19 to .3). I don’t think this change should be dismissed. On the other hand it’s not a transformation. In 2012 most candidates were still elected with pretty low vote shares, even after preference allocations. Only four candidates won more than 50 per cent of the vote and they all did so off first preference votes alone.

Histograms of winning candidate vote shares in 1997 and 2012 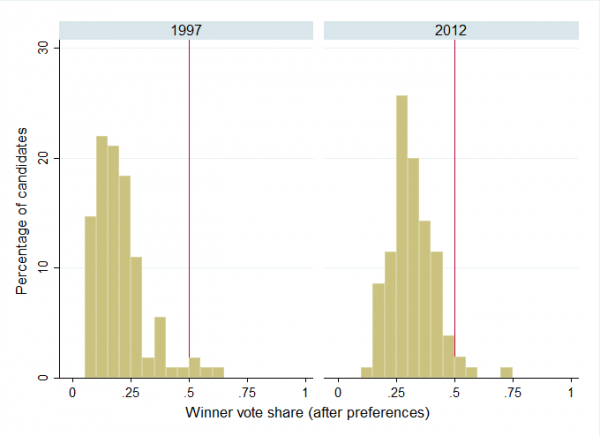 What’s more, other important electoral features haven’t changed with LPV. First, as you can see in the first figure on the Trends page of the Results Database, on average, candidate numbers dipped slightly in 2007 but then resumed their rise in 2012. LPV hasn’t calmed electoral competition in PNG; in much of the country more and more people are trying their hand at unseating their sitting member at each election. And, as you can see in the next chart, MP turnover rates are as high as ever. 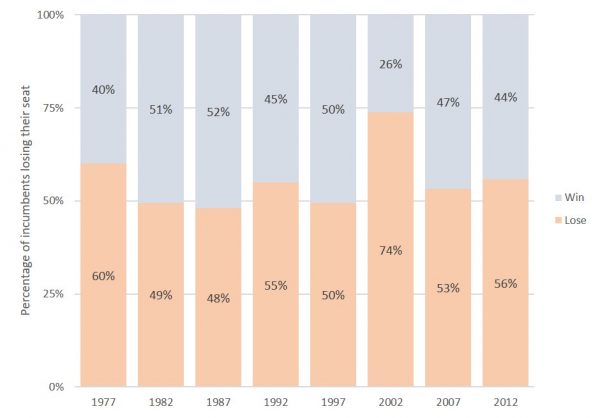 One hope for LPV was that the need to win second and third preference votes would see MPs try to cater to the needs of more of their constituents. Another hope was that, even if voters might still cast their first preference vote on the basis of obligation or in search of direct local benefits, they might use their second and third preference votes to reward candidates who looked like they would do a good job governing their country. Through this, it was hoped LPV might bring better governance to PNG. The World Bank’s governance indicators provide no evidence that Papua New Guinea is now better governed than it was prior to LPV. And incumbent turnover rates point to voters who are as frustrated with MPs as ever.

LPV has had an impact on election results, but it has not changed them that much. And PNG’s problems of political governance, be they national governance or be they dissatisfied voters, do not seem to have been cured. LPV’s high-level political effects appear to have been minimal. This doesn’t mean that the LPV experiment has failed entirely though. It’s possible it has reduced violence in some constituencies (although available evidence is too patchy for clear conclusions). And there are also other areas where it may have helped. In my next blog post I will look at one of these: the fate of women candidates.