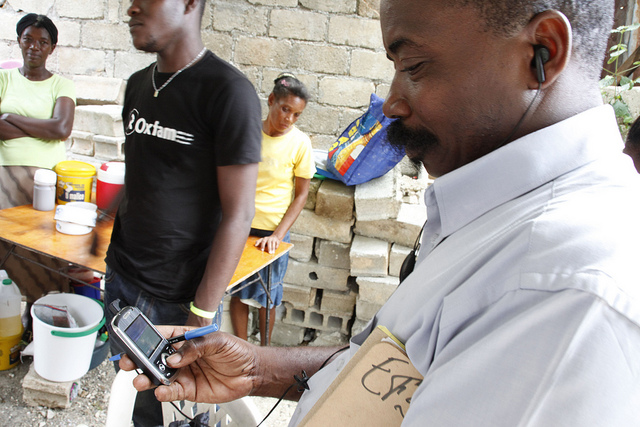 Digital disruption and development: a tool but no silver bullet

I recently participated on a panel at ANU Asia Pacific Week, on the somewhat doomsday-themed topic of ‘Can humanity survive digital disruption?’.

For me, digital disruption is when my internet stops working or my phone battery dies (and no, I cannot survive for long when that happens). A more technical definition is: “changes enabled by digital technologies that occur at a pace and magnitude that disrupt established ways of value creation, social interactions, doing business and more generally, our thinking”.

As a “digital native”, I argued that we have already survived and thrived among large-scale digital evolution so we’ll probably all be OK (though fellow ANU panellist Carol Hayes’ presentation on the evolution of robots with feelings in Japan was slightly concerning).

But in development, it is important to recognise that digital disruption presents both challenges and opportunities. And like any part of development practice, it needs to be well-handled to see positive results.

Mobile phone use is one example. We have seen rapid mobile user growth in developing countries and, as a result, numerous examples of it being harnessed for development. In Papua New Guinea, text messages are used to send teachers in remote schools lesson plans and materials for use in classes. In Timor-Leste, texts have been piloted for communicating with expectant mothers, to reduce maternal and infant mortality. In many parts of the world, text messaging is being used to share information on prices, weather and other factors that can impact profitability for primary producers. Texts are being used to alert people to disasters – something credited with lowering the death toll during Vanuatu’s recent Cyclone Pam. And then there is mobile banking, which has exploded, reducing transaction costs and increasing access to financial services for the poor.

Digital disruption done well can do good things for development, and for humanity. But this requires a strong understanding of context.

You’ll note that all the mobile phone examples I cited above involve using text messaging rather than apps – while in many rapidly developing countries in South East Asia, for example, there has been a significant growth in smartphone use (for example, 84 million people in Indonesia access the internet on their phone), in Melanesia, according to research by academic Amanda Watson, most phone users only have access to 2G networks and many don’t have sufficient income to buy data packages to download and use apps. At present, it would make little sense to invest in ‘apps for development’ in Melanesia, but it might make sense elsewhere.

And if you don’t have access to electricity, that’s also going to be a bit of an issue when it comes to charging your phone. In the Pacific islands region, for example [pdf], some 70 per cent of the population live without electricity. In some countries, such as PNG, access rates are as low as 10 per cent.

So the kind of digital disruptions that create positive change in some developing countries might not work so well in others – or might be a disruption whose time has not yet arrived.

Many of these disruptions also rely on certain things already having been achieved – for example, power and telecommunications infrastructure, enough regulation in place so that users can trust mobile banking services, policy that fosters a competitive communications market to ensure access is affordable, and so on. While digital disruption might be a tool of development, it is also somewhat reliant on other developments having already occurred.

It is also important to remember that digital technologies will never be a panacea or a silver bullet for fixing the root causes of poverty and inequality – no matter how smart your phone is, it will never be a replacement for a roof over your head, security and safety, the realisation of your rights, gender equality, education, good governance, clean water, access to food or other fundamentals.

When technology jumps the gun in developing countries, and runs ahead of policy, regulation, education and rights, the outcomes can sometimes be disastrous. For example, law enforcement weaknesses when combined with gender inequality, poverty and other drivers can lead to fast internet being used for sexual exploitation of women and children—this has been a particular issue in the Philippines. In countries where discrimination persists against marginalised groups, the internet can become a forum for hate speech and vilification (it should be noted this is an issue that many developed countries still grapple with, particularly when it comes to the abuse of women and minorities online). Limited digital literacy can also lead to the poor being scammed and exploited – online migration scams are all too common, as are SMS cash scams. It is not all rosy.

But on the other hand, digital disruption can bring us new ways to overcome persistent development challenges. One of history’s biggest digital disruptors, Bill Gates (disclosure: his foundation funds our work on Australian aid), is a loud proponent of the potential for low-cost technology and improved connectivity to transform education and banking in low and middle-income countries. Various movements in developing countries have used online media to build momentum for social and political change. There are new options emerging for mobilising resources (both human and financial) for development, such as through ‘hacker philanthropy’. And for remote and isolated Pacific island countries, which have limited opportunities to engage with global markets, high speed internet (combined with necessary upskilling of the workforce) is being viewed as an opportunity to export services in order to overcome the tyranny of distance.

For those working in aid and development, digital communications also open up opportunities for information-sharing, in order to do development better and more transparently. One project that I have worked on here at the Development Policy Centre is the Australian Aid Tracker. One of the more surprising outcomes when the site was launched was that people thought all the data on the website was new! Much of it was publicly available before, albeit trapped in PDFs and databases that were unwieldy and difficult for the average person to access or to understand. The Aid Tracker experience showed the importance of considering the needs and abilities of users, something that is important for digital disruptors to embrace if they want to see uptake.

Digital disruption alone is not the solution to global poverty, and can create its own challenges. But when hand-in-hand with other forms of change, I believe it has the power to shake things up in a positive way.

Ashlee Betteridge is a Research Officer at the Development Policy Centre. This blog is adapted from her presentation at ANU Asia Pacific Week 2016.