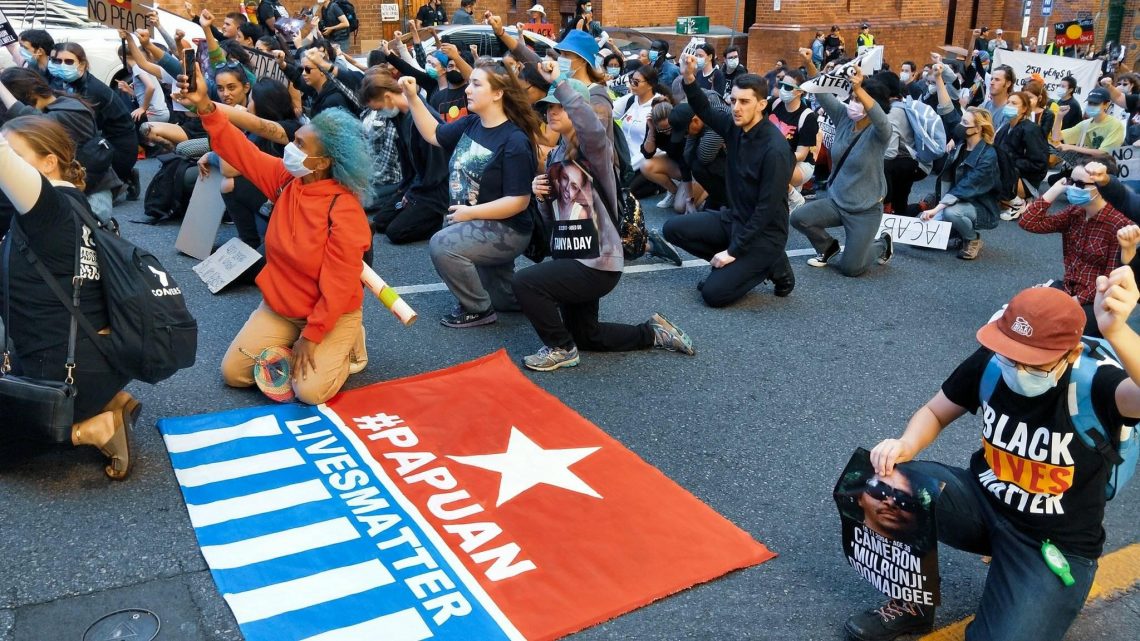 By Arichika Okazaki and Grant Walton

The tragic death of George Floyd has revitalised the Black Lives Matter (BLM) movement not only in the USA, but also in other parts of the world. In one of Australia’s closest neighbours, Indonesia, the BLM movement has helped place a spotlight on the long-running grievances held by those who identify as West Papuans and call for self-determination in Indonesia’s eastern provinces.

In West Papua, many indigenous Melanesians have been fighting against human rights violations – including unlawful arrests, violence against civilians, and violations against the right to peaceful assembly and association – committed by the Indonesian government since it took control of the territory in 1963. While international attention waxes and wanes, recent local conflagrations between militia and the Indonesian armed forces, as well as urban protests, have drawn international attention to West Papua’s struggle.

The renewed momentum of BLM has sparked the Papuan Lives Matter (PLM) movement, which has again helped highlight the ongoing concerns of those living in this troubled region. Photos and videos of protests and human rights abuses are shared over social media with the hashtag #PapuanLivesMatter. Media companies around the world have in turn highlighted racism and human rights violations in West Papua (as seen here, here, here, here, here and here). Indonesian Human rights lawyer Veronica Koman suggests that there is now even greater “sympathy from Indonesian people towards West Papuans” than during the uprising last year.

Global and national concern evoked through the PLM movement has put pressure on the Indonesian government; this has resulted in the recent “victory for political prisoners”. Seven Papuan men, known as ‘Balikpapan Seven’ who participated in anti-racism rallies and were arrested last year, were found guilty of treason but were only sentenced to up to 11 months in prison, much less than the sentences sought by Indonesian prosecutors of 5 to 17 years. While a small victory in relation to the protestors demands – the end of racism, a referendum on independence, and intervention from the United Nations and the international community – “[t]he world-wide pressure, from civil societies to legislatures, made all the difference.”

Yet in the Pacific region, only a brave few have dared highlight the plight of West Papuans.

There is a natural empathy for the plight of West Papuans amongst many grassroots Melanesians, and high-profile Pacific leaders have spoken against violence and expressed their support for the West Papuan cause (for example, the governor of Papua New Guinea’s National Capital District Powes Parkop and Vanuatu Prime Minister Bob Loughman). However, most Pacific governments remain more circumspect in regards to their support.

Australia, a key donor to Indonesia and the Pacific, has taken a cautious approach to the West Papuan issue, despite some commentators accusing it of turning a “blind eye” to these grievances.

The biggest reason for Australia’s indifference is its close relationship with Indonesia and the benefits that flow from this relationship. Indonesia is predicted to become the fifth largest economy in the world by 2030, and has become a key trading partner for Australia. The two countries’ trade in goods and services was worth A$17.8 billion in 2018-19, which makes Indonesia Australia’s second largest trading partner in the Pacific following New Zealand, and the thirteenth largest overall. Australia’s efforts to maintain close economic ties are outlined in the Indonesia-Australia Comprehensive Economic Partnership Agreement, which came into effect in July 2020.

Indonesia’s growing influence in the Pacific also helps explain Australia’s silence. With China’s rising influence, some suggest it is crucial for Australia to keep Indonesia as a close ally to maintain its power within the Pacific. Hugh White suggests Indonesia is “the only one of our neighbours that’s strong enough to really work with us to help to secure the region.”

Moreover, Australia’s support for independence in Timor-Leste significantly strained its relations with its northern neighbour. Four years after Timor-Leste’s formal independence, Australia also created a furore when it granted temporary protection visas to 42 Papuan asylum seekers; Indonesia responded by withdrawing its ambassador to Australia and announcing that it would be “reviewing” its bilateral cooperation. This incident led to both countries signing the Lombok Treaty, which obligates them to have “mutual respect for the sovereignty”, making it even harder for the Australian government to act on the issues in West Papua.

COVID-19 also directly threatens Papuan lives.  West Papuans are particularly vulnerable to COVID-19 due to limited access to health facilities. As of 30 September, there were 8,087 cases reported in West Papua and Papua provinces, though the rate of testing is well below World Health Organisation’s recommended rate. Despite this growing threat, West Papuans continue to protest; recently, en masse, they demanded the release of political prisoners, commemorated the 1962 New York Agreement against injustice and demonstrated against the extension of the Special Autonomy Law. In the provincial capital, Jayapura, many demanded a referendum on secession from Indonesia. Of course, such public gatherings risk spreading the virus more widely throughout the population (particularly as video footage suggests that mask wearing and social distancing are not strictly in place among protesters).

While responses to police brutality in the USA and subsequent PLM movement have helped focus attention on the plight of West Papuans, the COVID-19 pandemic might just prove to be yet another threat to West Papuan lives and another roadblock to self-determination. As the pandemic threatens to turn attention elsewhere, given ongoing human rights violations and a looming health crisis, it is now even more important that the international community and sympathetic Indonesians pressure the Indonesian government to help ensure Papuan lives really do matter.