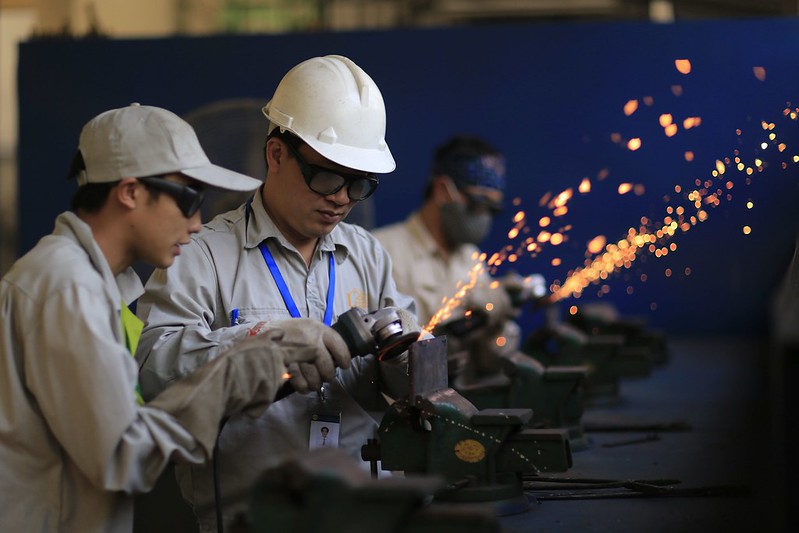 When people leave their countries to work abroad, firms, industry groups, and even policy-makers often raise concerns about so-called skills shortages and brain drain. I discussed this in detail in three earlier blogs (here, here, and here). These perceptions, whether valid or not, often lead to nationalistic policies that create barriers to labour mobility and economic integration, limiting the freedoms of citizens and broader economic and social progress.

One key issue that has for a long time been neglected in the evidence on migration and brain drain is whether emigration actually has a causal effect on firm productivity in labour-sending countries. And, if so, is this a short- or a long-run effect? What are the underlying causal mechanisms?

This blog summarises an exciting paper, ‘Firms left behind: emigration and firm productivity’ (presentation video; 2017 CESifo working paper) by Yvonne Giesing and Nadzeya Laurentsyeva which, to my knowledge, is the first such rigorous causal evidence on the matter.

The key methodological challenge in measuring a causal effect in this context is dealing with the fact that people could leave because of negative economic performance in the origin country when, in fact, any number of other factors could trigger simultaneous changes in firm productivity and migration. This paper addresses the challenge in a clever way. The European Union was enlarged to include poorer eastern nations in 2004, 2006 and 2013, each time with new labour mobility regulations. For the seven years after official accession of new member states, old states could restrict access to their labour markets for workers from new member states. This led to variation in labour mobility opportunities over time, which depended on country of origin, destination and industry. This variation, in turn, can be argued to be as-good-as-random (i.e. offering a quasi-experimental study setting) with respect to migrant-sending country productivity, because industry-by-year-by-destination regulation changes are unlikely to be influenced by firms in origin countries.

The main finding is that emigration does reduce firm productivity in the short term, but these effects fade in a few years. High- and low-productivity firms are similarly affected, but for different reasons. The potential workforce for low-productivity firms shrinks, so they lose workers. The productivity loss for more productive firms is due to new workers not being direct substitutes, for example lacking firm-specific skills and knowledge (gained over time through experience or training). At the industry level, some of the overall effects are reduced (i.e. attenuated) by firm entry and exit dynamics – for example, with some of the weakest firms leaving. 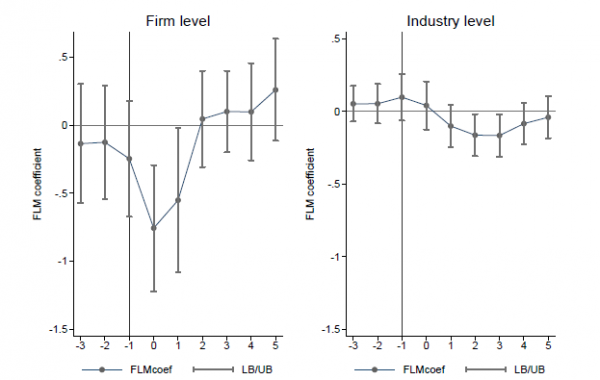 Note: The figure shows the baseline reduced-form estimates at the firm level (left) and at the industry level (right) with different time lags for the free labour mobility (FLM) variable. Controls are the same as in the baseline specification. Year and firm (left) or FLM. Errors are clustered at the origin-industry-year level. Confidence interval at 95%.

Firms more strongly exposed are also more likely to report “skill shortages”, suggesting they are missing firm-specific skills and knowledge. This problem is exacerbated by higher turnover and shorter tenure time. As a result, firms in industries with greater exposure to migration tend to provide less job-related training, which is unsurprising as there is less incentive to invest in employees if they are not expected to stay as long. Innovative firms, however, tend to be more successful in circumventing productivity losses because they increase personnel costs and use capital more intensively (relative to labour).

A key question for many readers might be one of external validity. That is, what does this study in Europe tell us about emigration from Australia or the Pacific? There are a few ways to think about this. Technically, this evidence is for the setting and time period being studied, and not evidence that the same patterns hold elsewhere. At the same time, it is the first causal study on the matter so it is, more or less, all we know about it, in terms of serious evidence. The paper is also careful to test the underlying theoretical channels – that is, how we think in general about these things, and transport theory from one context to another to make sense of the findings. All of the explanations do make sense, so it is not unreasonable to recalibrate our prior expectations from “we don’t know the potential effect” to “it might be negative, but only in the short run, based on what we know elsewhere”.

The research agenda on firms and migration is a very interesting one, usually focused on high-skilled workers and technology or manufacturing sectors. Together with various collaborators, I have embarked on a new project called the Small Firm Diaries, where we use the financial diaries methodology (see also here and here) to understand small firms in developing countries, investigating their cash flows and unveiling factors and impediments to their growth. This is a global project including Fiji – a country with a great deal of emigration, where concerns about potential brain drain are common. We are also planning to do a similar study to the Giesing and Laurentsyeva study in Tonga (with the World Bank and the Tongan statistics office), which, unusually for a Pacific country, has quite an extensive set of business surveys. Stay tuned for more on both.

This author’s research is undertaken with support from the Pacific Research Program, funded by the Department of Foreign Affairs and Trade. The views are those of the author only.