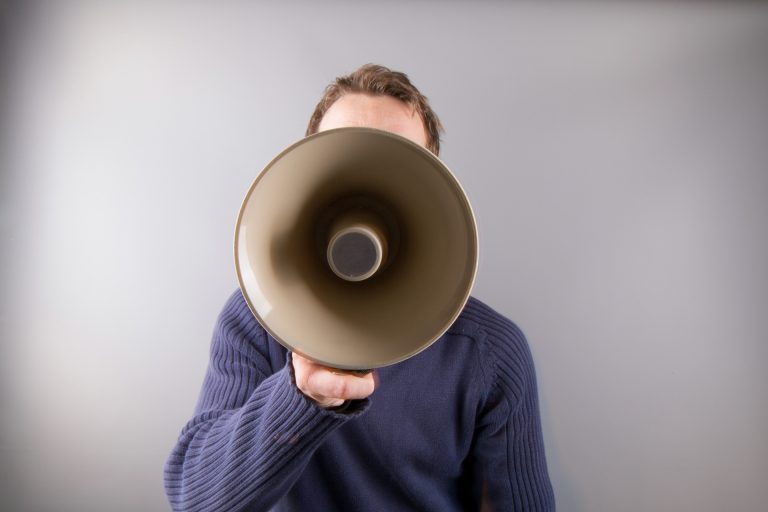 Should NGOs take money from the government? It’s one of those long-debated questions of development. There’s an obvious argument in favour: the money can be put to good use. And yet the counter argument is clear enough too: take money from the state and you give it leverage over you. If you do or say things it doesn’t like, it can cut your funding. At times you may directly be told what you can do or say. In other instances your own preemptive second-guessing may have the same effect. Or at least that’s the theory. But what about in practice?

The data we gathered as part of the NGO internet use content analysis we wrote about in our last blog offers us a test of this theory in the Australian case. From our content analysis we knew the extent to which each of the largest 50 Australian aid NGOs used different internet media to raise public awareness about development, and the extent which they used internet media to encourage people to take action on development-related issues. We were then able to combine these data with data on NGOs gathered by the Australian Council for International Development (ACFID) for the compilation of their 2015 annual report. In particular, we were able to obtain information on how large each NGO was, whether they were religious or not, and the proportion of their revenue that came from the Australian government.

With the combined data we were able to run regressions to see whether there was a relationship between the proportion of NGOs’ revenue that came from the Australian government aid program and the extent to which they used the internet to raise awareness and to encourage people to take action. We ran two regressions: one for “awareness” and one for “take action”. In each, the dependent variable was the average for the category over all of the different media types we studied. (So, for “take action”, it was take action for each NGO averaged across their front page, their get involved page, their Facebook feed and their Twitter feed.) In each regression we included two control variables (whether an NGO was religious or not, and the NGO’s size in terms of revenue), alongside the main independent variable of interest: proportion of revenue that came from the government. (Full details are in the methodology section of the discussion paper this blog post is based on.)

The result we were expecting was that more government funding would be associated with less internet media space devoted to raising awareness and encouraging people to take action. The two charts below show what we got. (These are the effects of government funding with the influence of the two control variables taken into account.) 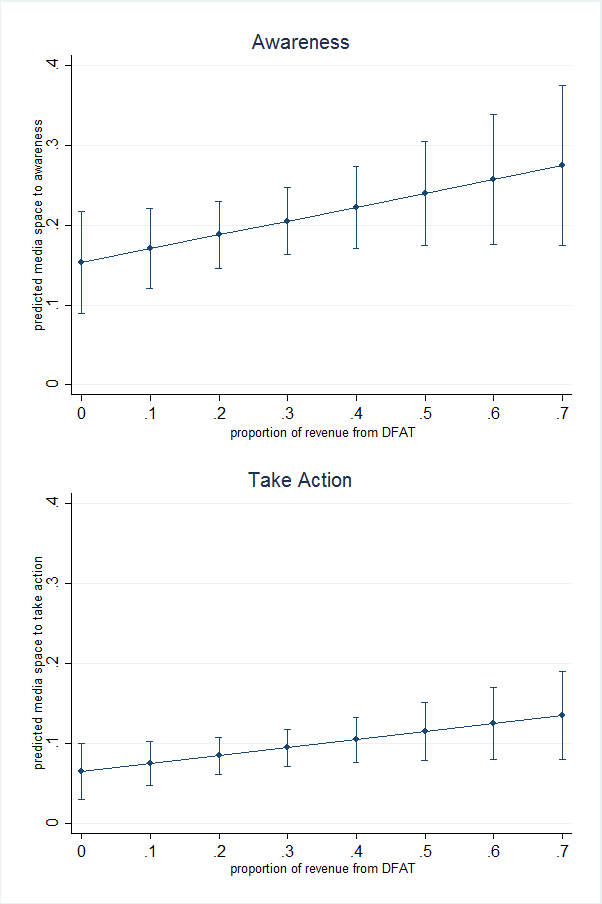 As the charts above show, we found the exact opposite of what we were expecting. If increased dependence on funding from the Australian aid program constrained NGOs’ ability to engage in awareness raising or encouraging people to take action on development issues, the lines on the charts would be downwards sloping, but they aren’t. In fact they are positive. The regression coefficients that the charts are drawn from are both statistically significant at p<0.1, which is reasonable for a sample of 50. And the findings performed pretty well in robustness tests. Ideally, we would have been able to add more control variables into the equation, but limited data and a small sample prevented this. So we are quite confident of the positive relationships, but are not absolutely certain. We can, however, be very confident that the relationships are not negative.

Of course, we do need to add some caveats. Showing that, on average, government funding is not negatively associated with awareness raising and encouraging people to take action is not the same as saying governments never use the leverage of funding to silence unruly NGOs. And although there is some tension at present between NGOs and the current government over issues like aid cuts, it’s possible that had we undertaken our study in a time when government/NGO relations were particularly oppositional, results might have been different. Also, our coding categories were general categories to do with “awareness” and “take action”; we might have found different answers if we focused only on activities that assertively targeted the government. What’s more, we’ve only looked at how NGOs use their internet presence. The relationship might plausibly have been different had we studied other media. Because of these caveats, we want to be emphatically clear: we’re not telling NGOs they can race out and take government funding confident this will not at some point constrain their ability to speak their minds. Practically speaking, that would be unwise.

However, thinking more theoretically, and even taking on board the caveats above, the positive relationship is an intriguing surprise. In our discussion paper we explain why we think it exists. In essence, our argument is that to a degree, for those NGOs that receive it, government funding reduces their need to obtain donations by every means necessary. And this in turn affords these NGOs the luxury of devoting some more of their internet media presence to fostering public engagement on development issues.

Terence Wood is a Research Fellow at the Development Policy Centre. Terence’s research interests include aid policy, the politics of aid, and governance in developing countries. Sachini Muller is a student at the Australian National University, and interned at the Development Policy Centre in Semester 1, 2016. Her interests lie in research and the aid and development sector, particularly in Asia and the Pacific.

This post is the second in a two-part series summarising Devpolicy Discussion Paper 47; find the first post here.